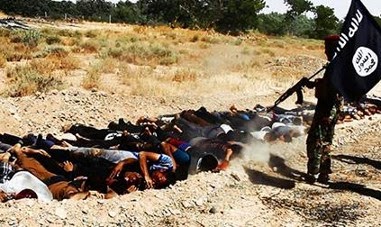 Obama said that on August 20, 2012 in remarks to reporters. Realizing that he was close to having to engage in some kind of military action against Bashar Assad, Syria’s dictator, he was bailed out by the Russians who stepped in to remove the stores of poison gas and then, except for the “red line” gaffe, everyone promptly forgot about it.

The insurrection against Assad began in March 2011 and by September 2013 there were an estimated 120,000 dead Syrians and a million or more refugees. The conflict turned from local to regional as the extremist Islamic State (IS) emerged. It is backed by Iran and Turkey, but only for the purpose of defeating Assad, not for declaring itself the new Caliphate.

IS is now in control of much of Syria’s northern region and has taken control of central Iraq, challenging Baghdad as well as its Kurdish sector. On Sunday Islamic State fighters overtook the Lebanese city of Arsal where 100,000 Syrian refugees had fled. There were attacks in Tripoli as well. There is no accounting for how many have been slaughtered by IS at this point.

On August 4, The Daily Star, Lebanon, reported “The jihadist Islamic State of Iraq and Greater Syria (ISIS) group executed seven members of a single family from the Ismaili minority in the central Syrian province of Hama overnight, state media and an activist group said Monday. ‘An armed terrorist group committed a massacre in the Mzeiraa area near the town of Salmiya, killing seven people, including two aged 13 and 15 years old,’ Syrian state news agency SANA said.”

Three days earlier Breitbart News reported “The Islamic State, formerly known as ISIS, told Palestine the terrorist group will join its fight against the ‘barbaric Jews’ but urged patience until ISIS is finished in Arab countries.”

So, according to the Islamic State, it is the Jews of Israel who are “barbaric” for defending themselves and their Arab citizens against rocket attacks from Gaza; land given to the Palestinians by Israel in 2005.

During the months when Hamas was firing thousands of rockets into Israel from Gaza there was a low level of coverage, but when Israel responded with Operation Protective Edge, it became front page news. Dead Palestinians always seem to be more important than dead Israelis even if they were forced by Hamas to serve as human shields for their rockets and their elaborate matrix of tunnels into Israel which exist solely to carry out its goal of destroying it.

Being Christian in the Middle East has proven to be deadly. When the Islamic State took control of Mosul, a city in which Christians had lived for centuries, they were given the choice of converting, paying a tax, or dying. The Islamic State has swiftly gained a reputation for murdering prisoners of war and anyone else they determine to be “hypocritical” or “apostate” Muslims. So being Muslim does not protect one from more fanatical Muslims and being Christian can be a death sentence.

In an August 4 Washington Post article, Ilias al-Hussani, 27, told its reporter, “They are savages. We’ve seen what they’ve done to people of their own faith. Imagine what they would do to us non-Muslims.” The article noted that Islamic State “now controls resources and territory unmatched in the history of extremist organizations.”

Who remembers the 246 girls kidnapped in April by Boko Haram in Nigeria and forced to convert? Or hears of their further attacks?

Despite having troops stationed in Afghanistan and having fought in Iraq, for Americans the Middle East is still someplace far away filled with people who are little more than statistics, but the Muslim jihad still poses a threat.

It is less far away for Europeans who have slowly awakened to the changes occurring and being demanded by the Muslims who emigrated there, many of whom to escape life in their own nations. As the Muslim population has grown in various European nations, it has begun to pose a threat to native-born citizens. Even so, the Israeli military operation unleashed a lot of Europe-based anti-Semitism and some showed up in the U.S. as well.

Does anyone know who the real enemy is any more?

There is going to be more news of slaughters in the Middle East because the Islamic State is going to challenge every nation there. Assad retains control over an estimated 40-60% of Syria. Iraq has been halved with just the south remaining. Lebanon will likely fall under IS control and that is bad news for the Christians who have lived there for centuries.

Jordan is girding for an attack. Saudi Arabia and the Gulf States are watching the situation with increasing apprehension.

The present Syrian conflict began in 2011 with an effort to remove Bashar Assad as other Middle East nations, Tunisia, Libya, and Egypt, had done with their despots during the so-called Arab Spring. In addition to Syria's Assad, Iran supports Hamas, but Iran is a Shiite nation and the Islamic State is Sunni. The Sunnis are the majority of the Middle East’s Muslim population.

The Islamic State has been officially designated as a foreign terrorist organization by the U.S., the U.K, Canada, Australia, Saudi Arabia, Indonesia, and the United Nations. It does not give much evidence of being concerned. It has access to millions in oil wealth and a growing military capability thanks in part to all the U.S. weapons that were abandoned by the Iraqis when they came under attack.

We cannot expect President Obama to engage the Islamic State. The term “Commander-in-Chief” has never been more misapplied to him than any President.

What we can expect is the continued expansion of the Islamic State and more news of the slaughter of Muslims and Christians.

Once Israel is through destroying Gaza’s tunnels and its store of rockets, it will have to turn its attention to the IS threat to Syria, Iraq, Jordan, Lebanon and perhaps Turkey as well. It will make Gaza look like a picnic.

Amazing how quickly the actual and anticipated withdrawal of American forces is seen and felt in the hotbeds of muslim terrorism. Whoever woulda thunk it? Certainly not our own Secretary of Pink Bicycling or his boss President E.O. bama.

Where is the "tranquility" Obama bragged about? Probably best not to ask Bibi.

Just something the Ebola Boy read off his teleprompter. He couldn't define "calculus" if his life depended on it.

"It is backed by Iran and Turkey, but only for the purpose of defeating Assad, not for declaring itself the new Caliphate."

Am I the only one who called bullshit on this obvious error? Iran is fighting the Sunni ISIS on behalf of both Damascus & Baghdad, and is Syria's main ally in the region.

Obama misread the teleprompter. It likely read calculations and he said calculus.