DUDE: Cult Of Climastrology Wouldn't Look To Actually Ban "Climate Denial", Would They?

There's a reason Jonah Goldberg referred to Progressivism as "nice fascism": you will be forced to comply. For your own good. And Warmists are primarily Progressives: 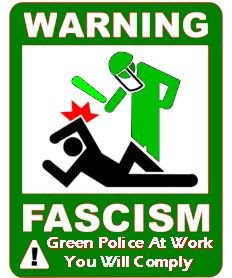 (UK Telegraph)  We might think that a semi-secret, international conference of top judges, held in the highest courtroom in Britain, to propose that it should be made illegal for anyone to question the scientific evidence for man-made global warming, was odd enough to be worthy of front-page coverage.

Last week I mentioned that the Prince of Wales had sent a message to this conference calling for the UN’s forthcoming climate meeting in Paris to agree on “a Magna Carta for the Earth”. But only a series of startling posts by a sharp-eyed Canadian blogger, Donna Laframboise (onNofrakkingconsensus), have alerted us to what a bizarre event this judicial gathering turned out to be (the organisers even refused to give her the names of those who attended). (snip)

The purpose of this strange get-together was outlined in a keynote speech (visible on YouTube) by Philippe Sands, a QC from Cherie Blair’s Matrix Chambers and professor of law at University College, London. Since it is now unlikely that the world will agree in Paris to a legally binding treaty to limit the rise in global temperatures to no more than 2 degrees C from pre-industrial levels, his theme was that it is now time for the courts to step in, to enforce this as worldwide law. (snip)

“The most important thing the courts could do,” he said, was to hold a top-level “finding of fact”, to settle these “scientific disputes” once and for all: so that it could then be made illegal for any government, corporation (or presumably individual scientist) ever to question the agreed “science” again. Furthermore, he went on, once “the scientific evidence” thus has the force of binding international law, it could be used to compel all governments to make “the emissions reductions that are needed”, including the phasing out of fossil fuels, to halt global warming in its tracks.

No one should be surprised by this in the least, being the logical extension of the whole "the science is settled" screeching from members of the Cult of Climastrology (who they themselves refused to practice what they preach). Warmists demand that the only science to be taught in schools is one sided, being more akin to indoctrination than scientific inquiry.

They refuse to follow the Scientific Model. They band together and assail any scientist who refuses to bow to the CoC. They yammer on about getting the US Department of Justice to file RICO (Rackateer Influenced and Corrupt Organizations Act, originally designed to prosecute the Mafia) charges against non-believers. They call for jail and death for Skeptics. Simply outlawing Skepticism is fully and wholly believable, and something that Warmists very much want to do.

William Teach is the proprieter of The Pirates Cove. I tend to blog quite a bit about 'climate change', taking the position that most climate change is caused by nature, and that Warmists are quite nuts, and that the whole 'climate change' movement is really all about pushing a Progressive political agenda. You can also hit me up on Twitter at @WilliamTeach. If you happen to see any weird formatting of posts, I'm not that used to Blogger.

[Ed: I would like to thank William, Sara Noble, and Terresa Monroe-Hamilton for guest blogging while I'm vacationing.]

at 3:31 PM
Email ThisBlogThis!Share to TwitterShare to FacebookShare to Pinterest

[And the biggest lie of them all is that society will be better off when we each live at the expense of others and acquiesce to the armed agents of the State to force us into allowing others to live at our expense.]