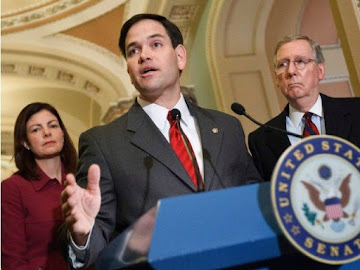 “Rubio voted in favor of fast-track and has struck a favorable tone toward the overall deal,” writes The Hill.

Obamatrade collectively refers to Trade Promotion Authority (TPA), which is the controversial fast-track mechanism for ramming trade treaties through Congress with minimum scrutiny, and the three major trade deals that would be guaranteed these “fast-track” protections before a page of them had been made public: the Trans-Pacific Partnership (TPP), Transatlantic Trade and Investment Partnership (T-TIP) and Trade in Services Agreement (TiSA).

Trade negotiators announced on Monday that they had reached an agreement on TPP.

In June of this year, Marco Rubio voted with GOP Leaders to pass fast track authority (TPA) and give Obama the power to ink globalist trade pacts before a single word of TPP, TiSA, or T-TIP were publicly available. Fast track authority lowers the 67 votes required to pass a treaty to a mere simply majority, it surrenders the 60 vote filibuster, and it forfeits individual senators’ ability to add amendments or changes to the trade deals negotiated by the president. It also allows the President to sign the agreement before Congress even votes.

In a CNBC interview with John Hardwood, Rubio expressed his “very positive” view about Obamatrade. Neither Hardwood nor Rubio, however, mentioned Rubio’s pivotal role in helping to pass the agreement. Nor did Hardwood or Rubio mention that the Florida Senator even enshrined the passage of the President’s global economic integration plan as one of the three “pillars” of his foreign policy platform in both an April op-ed in The Wall Street Journal and a foreign policy address in May of this year.

While Rubio failed to show up in the Senate to vote against Majority Leader McConnell’s bill fully funding Planned Parenthood, Rubio was on hand to provide the all-important 60th vote for Obamatrade’s fast-track.

“I’m generally very much in favor of free trade,” Rubio told CNBC. “I explain to people all the time the United States cannot get locked out of 95 percent of the world’s consumers.”

Critics, however, contend that these trade deals leave barriers in place to U.S. goods while flooding America’s markets with cheap foreign imports. As former Nucor Steel Chairman Daniel DiMicco has argued, “The Wall Street Republican and Democrat ‘free traders’ are not pursuing free trade at all.” Rather, by “convinc[ing] themselves that foreign mercantilism is irrelevant and the basic trade principle of reciprocity can be ignored… They are practicing ‘mercantilism enabling’ trade,” and are, “promot[ing] unilateral American trade disarmament.”

Polls show that the American public— particularly Republican voters— aggressively disagree with Rubio’s stance on the issue. Many Americans living in states ranging from the South to the Midwest to the Northeast have seen entire industries disappear as a result of what Washington calls “free trade.” The term “free trade,” like “immigration reform” is a catchphrase typically deployed by politicians to describe policies, which reduce national protections against the movement of foreign goods and labor into U.S. markets.

The Wall Street Journal writes that TPP would harm the U.S. automobile industry. According to a study by Peter Petri, a professor of international finance at Brandeis University, “the TPP could boost imports by an extra $30.8 billion by 2025, compared with an exports gain of $7.8 billion.” While the Japanese auto industry has “hailed” the TPP agreement, American automakers including Ford—recognizing the unfair advantage it will give their foreign competitors— have come out against it.

Four years ago, when President Obama announced his trade deal with South Korea, the American people were told the nation would see substantial economic gains. As AP reported at the time, “Exports of U.S. goods to South Korea could soar to $10 billion under the deal, which won rare praise for Obama from the U.S. Chamber of Commerce as well as some Republicans”– many of whom are now similarly urging the passage of Obamatrade.

Those promises, however, did not to come to fruition. Sen. Jeff Sessions (R-AL) has highlighted that the trade deal wound up increasing exports by only $0.8 billion and “boosted South Korea imports to our country by more than $12 billion, nearly doubling our trade gap with them.”

As former-AT&T CEO Leo Hindery, Jr. wrote in a recent op-ed for Reuters:

Sessions argues the eagerness with which so-called “free trade” proponents back any trade deal regardless of its impact on the nation or the protestations from their constitutions has reached a level of fanaticism.

I fear we have almost an obsession with trade agreements… This refusal by many to acknowledge the mercantilist policies of our trading competitors has gone, it seems to me, from promoting healthy trading relationships to an ideology, even to the nature of a religion… Capital is mobile. But workers, many times, are not. So when a company closes its plant in the United States, and shifts production to a lower-wage country, the company may make more money but the workers, and their communities—who cannot move overseas—suddenly don’t have jobs. They are hurt. The United States is a country—not an economy. And a country’s job is to protect its citizens—whether from military attacks, or from unfair trade policies that threaten the economic well-being of its own people.

Even though Rubio has already publicly endorsed TPP, made it part of his foreign policy strategy, and voted to speed its passage, Rubio played coy with Hardwood when asked about the pact. Rubio said that before he can offer “a firm commitment” to vote for it, “we want to see what the final agreement are. But generally, I’m disposed to being in favor of trade agreements.” What Rubio did not mention is that lawmakers are able to review a confidential draft of the text.

Despite his playful word games with Hardwood, Rubio has made adopting Obamatrade a signature platform of his campaign for presidency.

As early as April of this year, Rubio penned an op-ed in favor of the agreement– insisting that we “must” pass TPP, the final version of which he told CNBC yesterday he has not yet read.

The Trans-Pacific Partnership (TPP), discussed between President Obama and Prime Minister Abe this week, will further our strategic goals in Asia and increase prosperity at home. It will advance economic liberty and unleash free-market forces in the world’s most dynamic region… We must rebuild our own military capabilities, conclude and pass TPP, and renew our support for freedom and the rule of law in Asia. Too often over the past six years, U.S. leaders have spoken of their attention to Asia but failed to back up the rhetoric with action.

Similarly in an address to the Council on Foreign Relations in May of this year, Rubio described TPP as the “second pillar” of his three-pillar foreign policy strategy.

“My second pillar,” Rubio declared, “is the protection of the American economy in a globalized world… It is more important than ever that Congress give the president [Barack Obama] trade promotion authority so that he can finalize the Trans-Pacific Partnership and the Trans-Atlantic Trade and Investment Partnership.”

Even once Rubio does eventually read the latest version of the bill, it can still be subject to significant alterations. Because TPP is a “living agreement,” it can be changed subsequent to its adoption. This means that a group of twelve nations– and any new nation member that gets added to the partnership– would be empowered with, what Sen. Sessions has described as, “a sweeping new form of global governance. TPP calls this new global authority the ‘Trans-Pacific Partnership Commission.'”

Critics explain that “free traders” eagerly pushing to tie the nation down in the Trans-Pacific Partnership should expect no better results for American workers than the outcomes of global trade pacts of the past.

As counselor to the Secretary of Commerce in the Reagan Administration, Clyde Prestowitz sums up: “If exports are such good business, why has the U.S. manufacturing trade deficit soared over the last decade?”

The Trans-Pacific Partnership won’t deliver jobs or curb China’s power… U.S. leaders promised [previous “free-trade” deals] would create high-paying jobs, reduce the trade deficit, increase GDP and raise living standards. But none of these came true. In fact, the U.S. non-oil trade deficit continued to grow, millions of jobs were offshored and mean household income has hardly risen since 2000. And economists overwhelmingly agree that rising U.S. income inequality is being driven in part by international trade.