The Saudi justice system is cruel and barbaric. But occasionally they get one right.

The media is scuttling to turn Sheikh Nimr al-Nimr, a Shiite leader so great they named him twice, into a martyr after the Saudis put him down on terror charges. But Nimr al-Nimr was a terror leader. There are no shortage of quotes from him endorsing terrorism, backing Iran and calling for Iranian intervention in Saudi Arabia.

And yes, he hated America too.

Sheikh al-Nimr also made various anti-American references, claiming that America "wants to humiliate the world."  In the case of America striking Iran, al-Nimr stated that "Iran has the right to close the Straits of Hormuz, to destroy the Zionist enemy, and to strike at American bases and American interests anywhere."

Nimr was an agent of Iran. We, these days, have no ability to execute traitors. The Saudis do.

Saudi Arabia is full of Sunnis who say most of the same thing. Nimr got it because he was a Shiite and backed Iran. We don't actually have a dog in this fight, but we can say good riddance to another enemy. The media has tried to turn Nimr and his relative Ali Mohammed al-Nimr into martyrs. But let's remember how their Iranian bosses treated protesters during the Green Revolution.

The Nimrs at least weren't raped beforehand. That's more than those murdered by their Shiite terror regime in Iran can say. 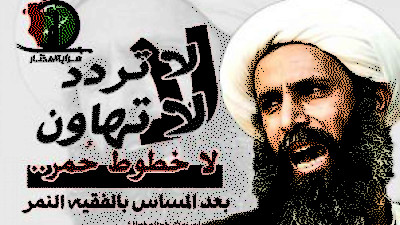 Taraneh Mussavi may or may not be that green-clad girl who was arrested at a demonstration near the Ghaba Mosque on June 27. The girl who was raped, suffered from a torn uterus and a torn anus, landed at a Karaj hospital, and was finally found dead in an unknown cemetery in northern Iran. Regardless, her name is the secret name for all the women who have been raped in prisons since the 1979 Revolution. What I want to say is that Taraneh Mussavi is not just one individual.

Mehdi Karroubi writes: “Some individuals have raped detained girls with such force as to cause tears and injuries to their sexual organs.” His claim may be entirely false, but that does not make any difference. The following are not exceptions: When Azar Al Kanaan (Nina Aghdam) speaks in front of the camera about how she was raped at Sanandaj prison. When Roya Toloui speaks of how she was raped by her interrogator. When Monireh Baradaran writes in her book Simple Truth, about Tahereh, a woman remembered by most prisoners from the 1980s, a beautiful woman who lost her sanity after being raped by a Pasdar [“Revolutionary Guard”]. When [Canadian Iranian Journalist] Zahra Kazemi’s dead body is covered with cement and her attorney, Shirin Ebadi asks the court, “Why the victim’s clothing was torn and bloodied in a particular location.” When the report from the coroner’s office states that Zahra Bani Yaghub was raped in the Basij headquarters’ detention center in Hamadan.

Published reports are available about these types of torture committed against women political prisoners after the 1979 Revolution. The most systematic type of reported rape has been the rape of virgin girls who were sentenced to death by execution because of political reasons. They were raped on the night before execution. These reports have been substantiated by frequent statements from the relatives of women political prisoners. On the day after the execution, authorities returned their daughter’s dead body to them along with a sum considered to be the alimony. Reports state that in order to lose their virginity, girls were forced to enter into a temporary marriage with men who were in charge of their prison. Otherwise it was feared that the executed prisoner would go to heaven because she was a virgin!

This was the sort of thing that the Nimrs and other Iranian agents want to spread. No one will weep for either the House of Saud or the Shiite Islamic Revolution or ISIS when they are gone.

While I'm no fan of the Saudis in general, the world's a better place with this guy taking a dirt nap