GOOD NEWS: Brokety-brokest State in the Union Wants to Tax Drivers by the Mile

Illinois already hoses drivers at the pump – now, one of the state’s most powerful politicians is eyeing a new way to collect road-usage taxes from all drivers – and to make sure electric-car drivers don’t slip through the cracks.

Illinois Senate President John Cullerton’s Senate Bill 3267 would require all drivers – not just those with electric cars – to pay a per-mile road-user fee starting July 2017. Drivers would still be required to pay gas taxes at the pump, but would receive a tax credit from the state to cover the number of miles they drive per month, according to the legislation.

If Cullerton’s plan becomes law, drivers would have to pick one of three tracking options: two plans that utilize tracking devices, or a third option through which drivers pay a flat $450 per year. 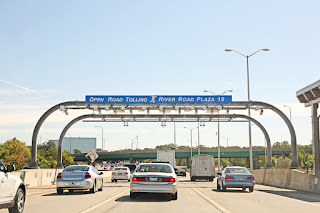 Cullerton said the motivation behind this bill is a lack of sufficient funds to maintain the state’s roads, and told the Daily Herald, “The Prius owners are the reason we need the bill.” He explained, “If all the cars were electric, there would be no money for the roads.”

SB 3267 is in the Senate Executive Committee, and Cullerton said it could move as soon as April 13.

But is this a good plan for drivers?

The administration of such a large-scale tracking and monitoring system seems a behemoth task – with every possibility of going awry, considering the layers of bureaucracy that would be needed to administer such a program. Just consider: 10.4 million cars are registered in the state of Illinois, according to the secretary of state.

The bill also would create the Illinois Road Improvement and Driver Enhancement Commission, a new administrative arm complete with an appointed chairman – with an annual salary of $18,000 – and four other members – each receiving $15,000 salaries per year.

State Sen. Matt Murphy, R-Palatine, has called on the state to consider a measured approach to Cullerton’s proposal, arguing it might be best to test as a pilot program, according to the Daily Herald. Carefully testing such a complex program would certainly be preferable to a massive change in the way drivers are taxed, but no new money should flow to Illinois roadwork until state lawmakers reform two major policy points that make road maintenance and construction so expensive: outlandishly high workers’ compensation costs and prevailing-wage requirements.

Illinois should certainly pump the brakes on this proposal, at the very least until taxpayers and politicians alike can see the price tag and magnitude of creating this new system.

Any scheme that involves GPS tracking will destroy the privacy that we still enjoy while traveling. Just say no to any GPS scheme!

they won't be happy until they can tax the air we breath,,,,,oh wait...

Massachusetts Turnpike installed Automatic Tolling at all exits along the route - it will help with toll collection but it can also be used to monitor your speed...and send you the speeding ticket in addition to the toll bill.

Sounds like all the back roads are gonna get real crowded the next few months!

Not sure how a mileage plan does not violate the Constitution. Let's take a family that lives in Illinois that decides to take a road trip to Disneyworld. Can Illinois justify taxing their travel in OTHER states to maintain Illinois roads? Or does everyone have to keep travel logs to deduct any trip outside of Illinois?

And, then there's the inconvenient fact that motor fuel taxes are diverted away from roads. http://wqad.com/2013/05/15/less-than-half-of-illinois-road-funds-spent-on-roads/

Road use tolls and taxes supporting other things is common. In NY, the NY State Thruway Authority is responsible for the NY State Canal System. Which is subsidized by motor vehicle tolls. Then there's this " According to Heritage Foundation Policy Analyst Emily Goff, Washington reportedly “diverts more than 25% of [the Highway Trust Fund revenue] to subways, streetcars, buses, bicycle and nature paths, and landscaping, at the expense of road and bridge projects.”"

I would not be averse to the idea of making more limited access highways into toll roads- provided the tolls be used exclusively for maintenance and operation of those roads and no others. But proposals to tax per mile use of a vehicle seem to me designed to turn rural dwellers into serfs. In rural America, things aren't next door. And rural America is where the food comes from for city and suburban America. Busses, subways, mass transit, none of those things provide a benefit to rural Amrica. Not practical in any sense of the word.