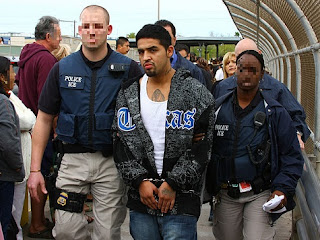 ICE continued to release deportable criminal aliens from its custody at an alarming rate in 2015, according to figures the agency provided to members of Congress this week in advance of a hearing taking place Thursday, April 28. In 2015, ICE freed 19,723 criminal aliens, who had a total of 64,197 convictions among them. These included 8,234 violent convictions and 208 homicide convictions. While the total number of releases is lower than the past two years, since the number of arrests has declined quite dramatically, the rate of releases is approximately the same — meaning that this is no progress at all, and certainly will be no consolation for the victims of these criminal aliens.

Saldana and ICE spokesmen have claimed that the drop in total releases is the result of new policies she implemented in 2015. In a statement to the Atlanta Journal Constitution in March of this year, ICE said:

The lower number of criminals aliens released in fiscal year 2015 can be credited in part to enhanced oversight for custody determinations announced early in 2015 which include stepped-up internal review of such decisions and additional monitoring of criminal aliens released.

Nice try, but in fact the main reason that fewer criminals were released in 2015 is because fewer criminals were arrested to begin with. In 2015, ICE made 119,772 arrests, or just half the number of arrests made in 2013 (232,287). Under the strict enforcement rules implemented as part of President Obama's executive actions announced in 2014, ICE officers are forced to ignore a large share of the criminal aliens they identify in jails or who are referred by local law enforcement agencies.

The impact on public safety of these releases has been profound. So far, 124 criminal aliens released by ICE have subsequently been charged with homicide. One victim was Grant Ronnebeck, a 21-year-old man who was killed while working at a convenience store in Mesa, Ariz. Ronnebeck's killer was an illegal alien who was released by ICE in 2013 after conviction for a burglary and kidnapping involving drug dealing.

When ICE releases criminal aliens instead of deporting them, the chances are high that the aliens will re-offend. According to the Bureau of Justice Statistics, approximately 71 percent of violent offenders, 77 percent of drug offenders, and 82 percent of property offenders will be arrested for a new crime within five years of release from jail or prison. Drunk drivers are especially prone to offend repeatedly. According to an FBI statistic cited by Mothers Against Drunk Driving, the average drunk driver has driven drunk 80 times before ever being arrested.

For the first time, ICE has provided information on the reasons for the criminal alien releases. In 2015, more than half the releases occurred due to an immigration judge decision. In many cases, ICE shares responsibility for these decisions, depending on how vigorously the ICE attorneys argue for detention.

In more than 2,166 cases, the criminal alien was released because his/her home country refused to take him/her back. In 89 cases, ICE was unable to obtain a travel document for the alien. In these circumstances, ICE can hold the alien for no longer than 180 days.

In numerous instances, aliens released because their home countries refused to take them back have gone on to commit further crimes, including murder. One such victim was Casey Chadwick, who was brutally stabbed in her apartment by Jean Jacques on June 15, 2015. Jacques served 16 years in prison in Connecticut for attempted murder and then was held and released three times by ICE, most recently just a few months before killing Chadwick. Chadwick's mother, Wendy Hartling, is testifying about her daughter's case at Thursday's House Oversight and Government Reform Committee hearing.

It is beyond scandalous that these releases continue, year after year, even after the deaths of Chadwick, Ronnebeck, and dozens of others. These cannot be characterized as "isolated incidents" or "anecdotal" — not after 86,000 releases and 124 new homicides. We don't need new laws to prevent these events; we need a president who will allow the officers responsible for enforcing immigration laws to do their job.