Critics are pointing to a financial disclosure report as evidence that the self-proclaimed grassroots movement Fight for $15 was actually orchestrated by a major labor union.

The Fight for $15 movement has fought since 2012 to raise the national minimum wage to $15 an hour. The movement has seen several successes on the local level from across the country. It has been marketed as a grassroots rise of low-wage workers, but the movement is highly paid by the Service Employees International Union (SEIU), according to a recent federal expenditure report.

“SEIU’s latest financial disclosure once again exposes the remarkable degree to which the ‘Fight for $15’ campaign is bought and paid for by big labor bosses trying to stay relevant in the 21st century,” America Rising Squared Executive Director Brian Rogers said in a statement provided to The Daily Caller News Foundation.

America Rising is a nonprofit research group that promotes conservative policies. The Department of Labor requires unions submit annual forms detailing financial expenditures. The SEIU indirectly spent $18.6 million on the Fight for $15 movement in the past year through associated groups helping to drive the initiative on the local level. Despite this, it still claims to be grassroots. 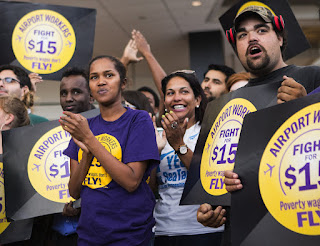 “As low wage workers we know what it’s like to struggle to get by,” the movement said in its website. “Because our pay is too low, we struggle to pay our bills and put food on the table. McDonald’s answer? Go on food stamps. We’re robbed on the job by our employers looking to cut corners. Employers that are multi-billion dollar corporations. Even though we work hard, we’re forced to live in poverty.”

The SEIU also spent $1,710,493 on the the public-relations firm BerlinRosen, which has helped promote Fight for $15 nationally. Similar expenditures have been found in previous years, even though advocates maintain it is a movement of low-wage workers. The union also notably lost 6,234 members in the past year.

“While the SEIU has made some headway in its push for a job-killing $15 minimum wage,” Center for Union Facts Executive Director Richard Berman said in a statement provided to TheDCNF. “[But] working Americans appear to be sending a clear message to SEIU big spenders: ‘Find a way to create jobs rather than diminishing them.’”

The support has seemed to payoff in a big way — the movement is seeing major successes across the country. New York and California both have pending legislation in their fights to become the first state with a $15 minimum wage, while several major cities have already implemented legislation.

Seattle became the first place in the entire country to enact the policy in June 2014. The SEIU spent roughly $2 million in the last year on Working Washington — a key player in promoting the Seattle increase. The union also contributed to the National Employment Law Project (NELP) and the Economic Policy Institute (EPI), both have released studies supporting the increase.

The movement is planning to launch its biggest national protest Apr. 14. Presidential hopeful Sen. Bernie Sanders has made the $15 minimum wage a main focus of his campaign, while his primary rival former Secretary of State Hillary Clinton supports states enacting the policy. Clinton has noted, however, the national minimum wage should not exceed $12 an hour.

Those in support of the policy said it could help address income inequality, but critics aren’t so sure. Low-income workers may end up earning more money, but employers may also cutback on their workforce or increase prices to overcome the added cost of labor.

The nonpartisan Congressional Budget Office has found both positive and negative results at minimumwage increases. It found any increase in the minimum wage will likely result in at least some job loss. The University of California, Berkeley found in a recent study that having less people in poverty outweighs the potential job loss.

The SEIU in past years has been criticized by some for allegedly using the Fight for 15 protests as a way to bypass labor laws to more easily unionize fast food workers. A minimum wage increase has the potential to benefit the SEIU directly while hurting non-unionized competitors, according to a report from Union Facts.

Fight for $15, the SEIU, NELP, EPI and BerlinRosen did not respond to a request for comment by TheDCNF.

I've been trying to find any hard information that identifies the contract mandated union raises and costs that will flow out of this decision. That is the reason the Unions bankrolled the minimum wage increase, to bump up the stagnant hourly pay of their own union members. The Unions will get that bump as soon as the new and higher Minimum Wage levels are active, and they are the only likely beneficiaries of this.

But all the national papers and coverage is all about the benefit to the poor and income inequality, nothing on the big paydays coming for the Unions even if (as is likely) no one getting minimum wage today sees one red cent (make that, one blue cent) from this because they have all lost their jobs