ALLEN WEST: What Everyone is Missing About Charlottesville

Charlottesville. This past weekend I was honored to be in a most picturesque place with some great and hospitable folks ib Prescott (Yavapai County) Arizona. I was there to address the Republican Women of Prescott, the nation’s largest Republican women’s club, on their 75th anniversary. The scenery there was just breathtaking and there was just a sense of solemnness that we all need experience from time to time. How great a contrast it was from what was happening across the country in Charlottesville, Virginia.

Let me begin by saying, I deplore any form of supremacist view — white, black, Hispanic, Islamic. I will be the first to openly state and embrace, a sense of American exceptionalism and supremacy that is rooted in our founding principles and values. Any and all else that is contradictory is to be condemned. What I have witnessed post the events of Saturday 12 August is the typical Rahm Emanuel mentality and political posturing: “never let a good crisis go to waste.”

Therefore, I seek to assess what really happened in Charlottesville, Virginia.

First, may God rest the soul of 32-year-old Heather Heyer who tragically lost her life. My sincere condolences to her, her family, and those others who were injured. I fully support seeking the death penalty for 20-year-old James Alex Fields Jr. of Ohio who committed this horrific act of violence. 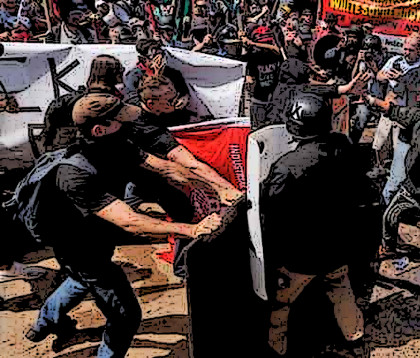 But, how did we get to this place?

This all began because someone decided, as other elected officials have across the country, to cave in to partisan political pressures and seek to erase American history.

History is not there for us to love or hate, but for us to learn from and seek to not repeat its mistakes.

If there are those who truly believe we protect ourselves by trying to revise history due to false emotions, then we miss out on who we are as a nation, and our evolution. The statues of long since deceased leaders of the Confederate Army do not stand to remind anyone of oppression. And if a statue can oppress you, then I submit that you have greater issues.

I certainly did not appreciate former President Barack Obama taking a photo op in Cuba before the image of Che Guevara, nor do I enjoy seeing anyone wearing said image on t-shirts here in America…but I do not go into some whimsical state of “oppression.”

And so it is that we do possess in this Constitutional Republic a freedom of speech and freedom of expression. It would appear that said group who didn’t wish to see the statue of Virginian, General Robert E. Lee, who was a commissioned U.S. Army officer, graduate of West Point, and served the nation in the Mexican War, taken down did apply for a permit to hold a rally.

We can dislike these individuals, but they took proper measures to secure permission to express their First Amendment right.

Contrary to their position, the word went out for a counter-protest to occur which included groups from a different side of the political spectrum, who have also been very guilty of hateful rhetoric and violence.

And we must also ascertain, did the counter-protest group seek permit or did they just “show up” in order to provoke, and elicit a response they could use “politically?”

Yes, motivations are important to understand in this case, if we’re serious about getting to the bottom of what happened in Charlottesville and not just the typical media-driven frenzy.

You Are Correct Sir.
Myself, Being White, I Knew It Was Just A Matter Of Time Before Radical Whites Got Involved
How Long Has The White Race Been Blamed For Being Born White, White Priveledge etc.
But, MSM Can't Join In On This Racist Agenda by Calling All The White People In The March Nazi Supremist etc.
Can't Get Away With Calling The Blacks In The March (BLM) All Racist etc..
The Racist (under the mayor) Should Be Held Responsible For The Cops Stan Down.
Check Out This Guys Tweets From The Past,They Reflect Who He Is, Not Who He Claims To Be. Racisim Like That Goes To The Core
So, U Believe Racisim Had A Huge Part In This
What's Weir Is Seeing White Kids Believing The Derogatory BS About Their Race.
Then When U Add In Soros Trying To Divide America Supporting Atifa, BLM and What Hate and Pain They Cause To Those Who Don't Agree (Berkeley) Dispictable.
I Was Born In 52, Boston Area, Many Black Friends Growing Up.
I Say, This Is Not What MLK and Others Struggled And Died For, It's A Shame.
Calling Blacks Victims, Puts Down All My Black Hard Working Friends, It Sucks
Atifa and BLM Need To Learn The History and Respect How Without Those Who Fought For Civil Rights They Wouldn't Even Be Allowed To March, Riot In The Same Group
I Blame Barry For The Current Racial Hatred, That Hadn't Existed Since The 60s
Divide And Conquer To Get Globalism.

Like I've said from the first few hours following this horrific event, would someone please corner the Mayor of Charlottesville and ask him why he failed to implement proper measures to prevent the clash of these two groups. In order to cover his incompetence, he took to the political stage and deflected attention away from the job he should have done and placed blame at the feet of Donald Trump. Well let's just consider if Trump had been the Mayor, this story may never had happened.

Does any of it matter? We don't fight but we will die easily. We can't even support a viable birthrate.

In my humble opinion, this is just another set-up similar to the reaction to the Mike Brown incident. In this case however, the response will not be held to one city or area but will go nationwide during the next few weeks. Watch for public damage to mount into the millions of dollars...and no public official will be held accountable.

Yes, let conservatives stay humble while the left takes it to us.