A huge Samsung Galaxy Note fan, my desire for acquiring an updated version last year was quashed by the fear of exploding batteries, FAA bans, and scorched kitschkes. Over at the local phone joint, an enterprising sales-dude convinced me that the Moto Z was a worthy replacement. Battery life, an exceptional camera, great screen resolution, and a hardiness bordering on total indestructability were his claims.

I surrendered to the sales pitch, albeit without my usual, paranoiac levels of due diligence.

This man was a liar. His lies were so obvious that Politifact and Snopes would have rated his statements "Mostly True".

After a year of usage -- and two replacement phones of the same ilk -- I can now definitively state that the Moto Z is the worst smartphone of all time. Congratulations! I've given this prestigious award not based upon one or two characteristics, but a whole litany of "attributes" (I'd call them product features, but they're almost certainly practical jokes introduced by engineers competing to see who could write the most production code while drunk and high). 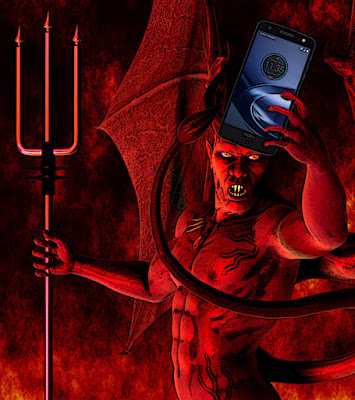 The Exorcist: Wi-Fi and BlueTooth Edition

While the DNA testing is inconclusive, the Moto Z is almost certainly the hellspawn product of an illicit union between Satan and Liz Warren.

Wireless connectivity, be it Wi-Fi or BlueTooth, is so inconsistent that it appears to be possessed by Beelzebub himself. My first Z just laughed at me when I tried to turn on wireless. Example: when flicking on the Wi-Fi switch, the phone would vibrate as if it was laughing and then flip the switch off.

And don't even ask me about BlueTooth. The latest Z is probably monitoring my online activity and may continue to punish me with random disconnects.

At this point, my only option for this phone is exorcism. Because I'm 99% certain that it's possessed by the devil.

The latest hilarious failure of the Moto Z involved the dreaded software update. A weirdly shaped icon suddenly appears on the top of your screen and when you swipe down you discover -- a pit in your stomach growing -- that what little works on your Z will soon be rendered even less useful.

The latest update was a doozy. Given the option to schedule the upgrade, I asked for Thursday morning at 3:00am local time. Sure enough, waking up at 6:30, the phone promptly asked me to press [OK] to start the update process. There was no option to defer or even shriek, "What the hell are you doing???"

That's the Z for you: it can't (or won't) even schedule an upgrade correctly.

Speaking of upgrades: after the latest super-happy-fun software update, I noticed my battery life was cut by a third or more. At a time of day when I'd normally have 70% left, I'd instead be at maybe 55%.

In the remarkably helpful Settings panel -- if you're a clairvoyant -- I clicked Battery, which lists the phone's biggest battery sucks. Yep: with the latest "upgrade", the "Idle" process is now consuming the most energy.

In other words, doing nothing takes more effort for the Moto Z than performing any useful work. Oh, and it's not very good at useful work either.

Another fun wildcard "feature" the Z occasionally throws at you is the "mini-screen". The usable display suddenly and unexpectedly shrinks to about a quarter of its normal size. Kind of like you've moved the phone to arm's length. But you haven't.

I tried to think of reasons the phone would do this and came up with a few:
I tend to go with "All of the Above".

That Scheduled Software Update? Be Prepared For a New, Amazingly Worse Experience

Just when I thought that the wireless connectivity couldn't get worse, the Z exceeded my expectations.

After the latest, ill-timed upgrade, BlueTooth (or BT) now only works once per restart. In Settings, flipping BT on results in an endless cycle of fail. BT never goes on and any paired devices you may have set up in the past never actually find the Z.

Now, Moto engineers: this is 2017. Is BlueTooth really that hard to implement?

I congratulate the Moto team, because they've convinced me to alter my normally libertarian position on drug-testing.

I publicly demand that Moto implement mandatory drug-testing for all of its employees and contractors.

Because nothing less than the widespread abuse of psychotropic drugs can explain this catastrophic failure of something claiming to be a phone.

In fact, calling the Moto Z a phone is -- in my opinion -- false advertising. Thank you. And may God bless my next phone. Because the Devil's got my current one.

Don't know about that devil possession, but it is powered by google which is far worse.

Hey, quit your bitchin' and keep the phone for another 6 months. When its "updates" come around that phone will slow to a crawl and you will beg for the newest thousand dollar smartphone to replace it. Anybody can get used to crummy features but everybody gets burned by planned obsolescence.

Packers And Movers Chennai said...
This comment has been removed by a blog administrator.
1:31 AM