HALF A BILLION DOLLARS: How Much the 17 NFL Players Who Took a Knee in London Make

The 17 Baltimore Ravens and Jacksonville Jaguars players who took a knee during the presentation of the national anthem in London on Sunday have combined total contracts of nearly $450 million.

Combing the total value of each players contracts adds up to a whopping $448,373,425, a figure greater than the gross domestic product of over a handful of the world’s nations.

ESPN reported that 10 Ravens players and roughly the same number of Jaguars players took a knee during the national anthem Sunday at Wembley Stadium in London. 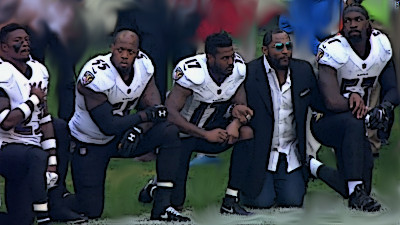 The players were likely kneeling in response to recent comments from President Donald Trump regarding the ongoing protests of the national anthem at NFL games across the country.

Trump said Sunday morning that NFL owners should either fire or suspend players who kneel during the national anthem, and fans should not keep watching games if players continue to protest.

“If NFL fans refuse to go to games until players stop disrespecting our Flag & Country, you will see change take place fast. Fire or suspend!,” the president tweeted Sunday morning.

The president’s comments come on the heels of an impassioned speech he gave in Huntsville, Ala., Friday evening. He came out swinging in his comments against NFL players who choose to kneel during the national anthem.

“Wouldn’t you love to see one of these NFL owners, when somebody disrespects our flag, to say, ‘Get that son of a bitch off the field right now. Out. He’s fired. He’s fired!”

Former San Francisco quarterback Colin Kaepernick knelt during the national anthem during the 2016 NFL season and sparked a mass wave of protests that have trickled down to Pop Warner football teams across the nation.

Have any of these million dollar illiterates been able to explain exactly what they are protesting?

I want to see them take a knee in the South side of Chicago, Philadelphia, Detroit, or Baltimore.

The people who take a knee during the national anthem do so because their not worthy to stand with proud Americans.