3 CURIOUS FACTOIDS: Were Others in Paddock’s Suite?

1 Reports from NBC News indicate that more than one person almost certainly visited Stephen Paddock's suite at the Mandalay Bay Resort and Casino.

...investigators are puzzled by two discoveries: First, a charger was found that does not match any of the cellphones that belonged to the gunman, Stephen Paddock.

And second, garage records show that during a period when Paddock's car left the hotel garage, one of his key cards was used to get into his room.

There are several possible explanations for these anomalies, the investigators say, but they want to get to the bottom of it.

2 And at Captain's Journal, Herschel Smith points us to a video snippet that seems to capture two weapons firing simultaneously.

...Watch this video, and listen and watch extra carefully at about the 12:00 mark.

While I don’t agree that the video demonstrates that any of these firearms are belt-fed or crew serve weapons, or suppressed, there is no mistaking one fact. He points out a moment in the video where two or more shooters must be shooting. There is no other way to interpret that video. Many of the suppositions in other posts, entries, discussion forums and threads have multiple explanations or plausible alternative possibilities. This one doesn’t. There are at least two shooters at that moment.

3 In a little-publicized event, Sheriff Joe Lombardo of Clark County, Nevada issued a curious statement during a press conference:

The evidence offers an insight into Paddock’s careful planning of the shooting. Lombardo said: “I’m pretty sure he evaluated everything that he did in his actions, which is troubling.”

...Paddock’s motive remains unknown. “This person may have been radicalised, unbeknownst to us, and we want to identify that source.”

The term "radicalized" has a very conspicuous meaning, one which is most often associated with Islamist terror.

In fact, ISIS continues to tie Paddock to its sick group of Islamonazi throwbacks: 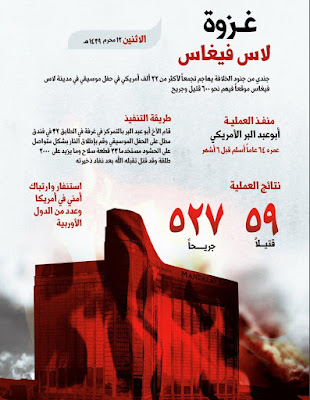 ...The ISIS claim is unusual, experts say, being the fourth such published statement from the group in the five days since the horrifying massacre took place. In most past terrorist attacks, ISIS has issued a single statement taking responsibility for the action and has not followed up.

But the new statement released Thursday is not only the fourth from an ISIS publication, but it was published in the third separate source — after two statements through the ISIS-linked online propaganda agency Amaq, and a third the following day published by the “official” ISIS news agency Nashir.

The latest statement, released on Thursday night, appeared in the form of a slickly produced “infographic” appearing in a weekly online magazine published by ISIS, Al-Naba, or in English simply, The News. The online publication is described as “an Arabic weekly newspaper on provincial military activities and regional events by the Islamic State.”

Lombardo also noted that: "You’ve got to make the assumption he had to have some help at some point."

While the evidence is far from convincing that he had help, there are certainly avenues that remain to be explored before we categorically state that he was a lone actor.

I clearly hear two shooters in that segment. What I identify though is an AR 15 and an A 10, not a belt fed. Most belt feds are heavy, 7.62 7.92, .50, but the condition of feeding from a belt vs feeding from a mag would have absolutely no effect on sound.
Another factor is with a belt fed, you almost need to have an assistant gunner making sure the belts don't snarl as the beast is fed.
Lastly, such a weapon isn't something you pick up and run away with easily. BY now every room of the Mandalay Bay has had cleaning staff in it. If some one had had a belt fed any where, there would be evidence, a link, heck, just the smoke smell.