A day after The Hill reporters revealed a stunning bribery plot involving the Russian government and members of the Obama administration, our modern day Pravda -- you may know it as "CNN" -- decided its audience didn't actually need to know that inconsequential bit of breaking news.

Sure, they cover the usual litany of anti-Trump stories.

But searching its front page for the word "Russia" revealed only one reference. Well, slap me on the butt and call me Nancy: that one is about the "Russia-Trump collusion" scam. 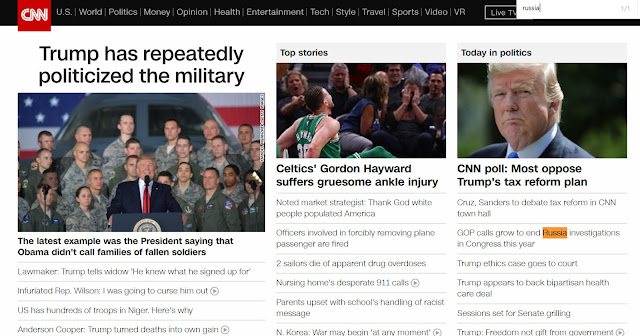 Here's the kicker: the FBI uncovered a Russian bribery scheme months before the Clinton uranium deal was approved. Oh. It gets better.

Before the Obama administration approved a controversial deal in 2010 giving Moscow control of a large swath of American uranium, the FBI had gathered substantial evidence that Russian nuclear industry officials were engaged in bribery, kickbacks, extortion and money laundering designed to grow Vladimir Putin’s atomic energy business inside the United States...

......They also obtained an eyewitness account — backed by documents — indicating Russian nuclear officials had routed millions of dollars to the U.S. designed to benefit former President Bill Clinton’s charitable foundation during the time Secretary of State Hillary Clinton served on a government body that provided a favorable decision to Moscow, sources [said]...

Both men now play a key role in the current investigation into possible, but still unproven, collusion between Russia and Donald Trump’s campaign during the 2016 election cycle. McCabe is under congressional and Justice Department inspector general investigation in connection with money his wife’s Virginia state Senate campaign accepted in 2015 from now-Virginia Gov. Terry McAuliffe at a time when McAuliffe was reportedly under investigation by the FBI. The probe is not focused on McAuliffe's conduct but rather on whether McCabe's attendance violated the Hatch Act or other FBI conflict rules.

The connections to the current Russia case are many. The Mikerin probe began in 2009 when Robert Mueller, now the special counsel in charge of the Trump case, was still FBI director. And it ended in late 2015 under the direction of then-FBI Director James Comey, whom Trump fired earlier this year.

Robert Mueller needs to recuse himself as special counsel within the next 24 hours. Otherwise, he should be terminated by President Trump.

Rod Rosenstein needs to be terminated by President Trump for allowing this charade to proceed.

Jeff Sessions has some splain' to do.

I say "I guess" because no matter how many committees investigate high crimes among the powerful D.C. cabal -- the Clinton Foundation uranium quid-pro-quo being the archetype -- no one ever seems to get prosecuted.

Maybe these committees should just outsource their function to Judicial Watch, which seems to be the only entity in D.C. that actually gets results.

Robert Mueller is playing cleanup - ensuring that any damning evidence is properly disposed prior to a real investigation.

Yes he should recuse himself - but I have no confidence that he will - there's still too much to clean up, and deflect.