JUDICIAL TYRANNY: William Orrick, a Name That Will Live in Infamy

The Constitution and the laws passed by Congress define one person who determines and executes U.S. immigration policy and U.S. District Judge William Orrick is not it. Yet there is Judge Orrick once again imposing his will on the expressed will of the American people through their elected representatives by issuing a permanent ban on President Trump’s executive order defunding sanctuary ciies:

But is he setting new conditions or enforcing existing conditions and existing law? Feferal funds, particularly federal law enforcement grants, are given out on the assumption, if not the expressed intent, that recipienys are goin to use that money enforcing federal law. They are not provided out of the goodness of taxpayer hearts.

As Sen. Orrin Hatch, R-Utah, Chairman of the Senate Judiciary Committee, has observed,, activist judges deeply involved in politics are likely more loyal to their ideology than to the Constitution, doing great harm to the country and the American people:

“Judges who take the law into their own hands, who make up constitutional 'rights' in order to strike down laws they oppose, undermine the people's right to have their values shape public policy and define the culture.”

Certainly President Trump and his Department of Justice are well within their authority in directing executive branch departments to enforce federal laws and programs they administer:

Justice Department spokesman Devin O’Malley said the judge got it wrong and was intruding on Mr. Trump’s own powers.

“The district court exceeded its authority today when it barred the president from instructing his cabinet members to enforce existing law,” Mr. O’Malley said in a statement. “The Justice Department will vindicate the president’s lawful authority to direct the executive branch.” 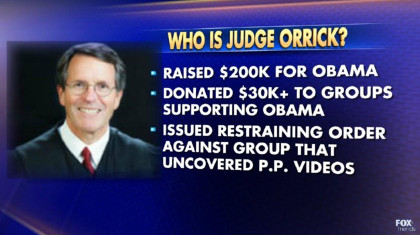 Judge Orrick, a key Obama donor appointed by him, has demonstrated such politically motivated activism before, having put a temporary hold on President Trump’s attempts to defund sanctuary cities in April, demonstrating a double standard when President Obama tried to withhold funds from North Carolina suring the transgender restroom kerfuffle.

The fine points of Federal Judge William Orrick’s ruling blocking the withholding of federal funds from sanctuary cities must have been lost on the families of Jamiel Shaw, Jr. and Kate Steinle, American citizens murdered by illegal aliens harbored and coddled by the sanctuary cities of Los Angeles and San Francisco, respectively. No doubt they failed to grasp the legal logic which says cities are free to violate federal law while wrapping themselves in the U.S. Constitution.

The notion advance by Judge Orrick that the Trump administration’s attempt to defund sanctuary cities is unconstitutional because it amounts to changing the rules at halftime is nonsense, both historically and legally.  The federal government has long threatened to withhold federal funds to enforce federal policy over states rights from the federal speed limit to transgendered bathrooms.  As  the New York Times noted, President Obama threatened to cut off federal funds to North Carolina over its transgendered bathroom law:

The Obama administration is considering whether North Carolina’s new law on gay and transgender rights makes the state ineligible for billions of dollars in federal aid for schools, highways and housing, officials said Friday.

Cutting off any federal money — or even simply threatening to do so — would put major new pressure on North Carolina to repeal the law, which eliminated local protections for gay and transgender people and restricted which bathrooms transgender people can use.

Orrick ruled that the Trump administration cannot set new conditions on federal funding approved by Congress. He had no objection to Obama’s proposed defunding of unrelated matters in North Carolina. Implicit in accepting federal funding, one would think, would be the condition of obeying the laws of the United States which sanctuary city officials are sworn to uphold. The laws of the United States give the President control of immigration policy and the Constitution gives the President control of foreign policy and border security.

Title 8 U.S.C. 1324 makes it quite explicit that harboring and concealing from detection illegal aliens is a felony, whether committed by individuals or sanctuary city officials:

Harboring — Subsection 1324(a)(1)(A)(iii) makes it an offense for any person who — knowing or in reckless disregard of the fact that an alien has come to, entered, or remains in the United States in violation of law, conceals harbors, or shields from detection, or attempts to conceal, harbor, or shield from detection, such alien in any place, including any building or any means of transportation.

Now it may be argued that the DOJ would be better off legally prosecuting sanctuary city mayors rather than trying to withhold federal funds from their cities, but one is not exclusive of the other. Sanctuary city mayors are in clear violation of federal statute so for Judge Orrick to argue that withholding federal funds from those violating federal law is unconstitutional is, again, nonsense.

Sanctuary city officials could very well be prosecuted for breaking the law and recklessly endangering their citizens by harboring and shielding from scrutiny illegal aliens among whose number may include assorted Islamic State agents, sympathizers and potential lone wolf recruits, along with assorted criminals, like the one charged with the murder of Kate Steinle in the sanctuary city of San Francisco. They are accomplices in crime.

That is the suggestion of Louisiana Gov. Bobby Jindal. Jindal made the case on recently on Boston Herald Radio:

“Absolutely, I would hold them as an accomplice. Make them criminally culpable,” the Republican presidential candidate said when asked if he’d arrest mayors of sanctuary cities . “I’d also make them civilly liable so that families, victim’s families could sue. Especially if the prosecutor isn’t taking action or the mayor’s not changing their ways, I’d allow the families to go to court as well to recover damages.”

Again, neither Judge Orrick or any others who legislate from the bench had no problem with the Obama administration’s “guidance” to schools that sex discrimination now included sexual identity and that those that didn’t provide transgendered restrooms put their federal funding at risk.  Judge Orrick may well be the poster child for politicization of the federal bench and the classic adage, follow the money.  As Fox News Insider points out:

At the time, The Federalist found that Orrick raised at least $200,000 for Obama and donated more than $30,000 to groups supporting him.

We have seen this judicial overreach before, in the ruling against by Friend of Obama, Judge Derrick Watson of Hawaii, who graduated from the same Harvard Law School class as President Obama. Judge Watson also ignored federal statute in his ruling on Trump’s travel ban from certain Muslim countries. The application by Judge Watson of the Establishment Clause to Trump’s travel ban, this is from some Alice In Wonderland law book. If the travel ban violates the Establishment Clause, why hasn’t 8 U.S. Code 1182 been struck down by Judge Watson or any other liberal judge?  Oklahoma Attorney Robert Barnes, interviewed on Sirius XM radio, says Judge Watson is clearly wrong  in extending the Establish Clause to non-citizen foreigners:

“His basis for doing so was an extraordinary interpretation of the right to travel and the freedom of association, which before, has only been associated with U.S. citizens,” Barnes continued. “Every court decision in the 200 years prior to this has said that people who are not citizens of the United States, who are not present within the United States, have no First Amendment constitutional rights. The Constitution doesn’t extend internationally to anybody, anywhere, anyplace, at any time. Instead, this judge said it did, as long as you had a university here who wanted to assert, quote-unquote, the foreigner’s rights, or you had some physical person here. In this case, it was one of the leading Muslim imams in Hawaii; he wants to bring over various family and friends from the Middle East.”

“The Hawaii judge’s decision says he has a First Amendment constitutional right to do so because he’s Muslim. It was one of the most extraordinary interpretations of the Establishment Clause of the First Amendment ever given, which is that because these are Muslim countries that were banned where the issue of terror arises from that that meant they had a special right to access the country and visit the country,” he said.

“As long as there is somebody here that wants them here, no president can ever preclude them from coming here. He basically gave First Amendment rights to everybody around the world and gave special preferences to people who are Muslim under his interpretation of the First Amendment,” Barnes summarized.

“So it’s an extraordinarily broad order. Its legal doctrine has no limits. If you keep extending this, it means people from around the world have a special right to access the United States, visit the United States, emigrate to the United States, get visas to the United States. There wouldn’t be any limit, and the president would never be able to control our own borders. It would be up solely to the whim of a federal judge who effectively delegated it, in this case, to a Muslim imam in Hawaii,” he contended.

Two activist judges personally and politically close to Obama have ignored federal statute to promote an ideological agenda Obama and liberal mayors of sanctuary cities embrace. These cases may soon be brought before the U.S. Supreme Court. Thankfully, Judge Neil Gorsuch, a Constitutional originalist with no discernible political agenda, now sits on a Supreme Court that may soon have a chance to restore adherence to federal law and, yes, the Constitution.