Maybe now, Democratic liberals will see the folly of giving illegal aliens drivers licenses on the false premise that it makes us all safer. And maybe liberal judges from Hawaii will think again about the wisdom of Trump’s travel ban and desire to switch to a merit-based immigration system.

Sayfullo Saipov was not an illegal alien and his home country of Uzbekistan was not on the travel ban list of countries, but his presence here to kill and maim American citizens speaks to another idiotic immigration program -- the diversity visa lottery created by the same Sen. Chuck Schumer who cried about the cruelty of Trump’s travel ban amidst a bevy of aliens from central casting. He is now free to shed a tear for the victims of his program:

"The terrorist came into our country through what is called the 'Diversity Visa Lottery Program,' a Chuck Schumer beauty. I want merit based," Trump tweeted. "We are fighting hard for Merit Based immigration, no more Democrat Lottery Systems. We must get MUCH tougher (and smarter)."

The DV program makes up to 50,000 immigrant visas available annually, "drawn from random selection among all entries to individuals who are from countries with low rates of immigration" to the U.S., according to the U.S. Citizen and Immigration Services website. Applicants must prove they have a clean criminal record, have a high school diploma or its equivalent, or have at least two years of work experience within the past five years in order to qualify.

The program originated as part of a bill introduced in 1990 by Sen. Chuck Schumer, D-N.Y., then a member of the House. Schumer’s measure to make a set number of visas available to “diversity immigrants” from certain countries was absorbed into a larger House immigration bill, which was sponsored by Schumer and 31 others, including several Republicans.

Some say we shouldn’t bar people based on their country of origin or even their religion. Yet there are not many Swedish Baptists driving trucks into pedestrian crowds. And what kind of immigration system uses a lottery to admit immigrants. That’s playing Russian roulette with the lives of American citizens.

Schumer, standing alongside refugees, called on the Senate to vote on legislation blocking Trump's order.

Choking back tears, Schumer called the order “mean-spirited and un-American.”

“These orders go against what America has always been about. The orders make us less humanitarian, less safe, less American,” Schumer said. 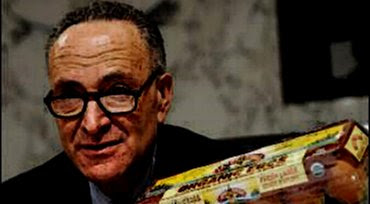 How he figured that remains a mystery: Trump’s travel ban and other immigration proposals have been called cruel but what is more cruel than pedestrians and bicyclists being run down by someone who was admitted to this country through a lottery?

Immigration is a privilege and not a right. Nobody has a constitutional right to be here and no matter what some liberal judge may say constitutional protections do not extend to noncitizens overseas. And certainly, admission to the United States should not be a prize won in a lottery.

Time after time, terrorists have exploited our compassion to come here to kill us. In San Bernardino, one of the terrorists arrived using what is called a marriage visa to unite with her husband-to-be in a plot to commit murder, something which prompted some too call for a review of our visa programs:

The suspect, Tashfeen Malik, came to the U.S. on a special K-1 visa last year, raising new questions about potential vulnerabilities in the immigration system.

That special K-1 visa allows foreigners to come to America to marry a U.S. citizen…

“In light of the renewed terrorist threat, we need to take a look at our entire visa program to enhance our national security. This incident highlights the very real security threat throughout the system,” Rep. Luke Messer (R-Ind.), the GOP Policy Committee chairman and a member of leadership, told The Hill on Friday.

“Experts in the field now say that terrorists recognize that passports, visas and immigration documents are now weapons in the war on terror.”

Indeed, they do. So did the Tsarnaev brothers, whose family came here under the guise of fleeing persecution and seeking political asylum:

Though they had convinced the U.S. that they faced deadly persecution, the Tsarnaevs' parents both returned to their native land and were there when their sons launched last week's terror rampage. Authorities will not reveal any details of the sob stories the Tsarnaevs originally spun to win asylum benefits for the entire family.

Marriage visas, political asylum seekers, and lotteries sound good and compassionate, but they can let in killers and the terrorists who know how to game the system. Many of the holes in our politically correct but suicidal immigration system would be plugged by the Reforming Immigration For A Strong Economy or RAISE Act currently pending in Congress:

In the wake of Tuesday’s terror attack in New York City, U.S. Sen. David Perdue (R-GA) is touting the proposed RAISE Act that has garnered the support of President Donald Trump.

The plan, authored by Perdue and U.S. Sen. Tom Cotton (R-AR), would eliminate the diversity visa that granted entrance to Sayfullo Saipov, 29, who is suspected of killing killed eight people by plowing his rented truck into a bicycle path in Lower Manhattan…

Besides eliminating the visa lottery, Perdue and Cotton said the RAISE Act would:

•Replace the current permanent employment-visa system with a skills-based points system, akin to the systems used by Canada and Australia. The system would prioritize those immigrants who are best positioned to succeed in the United States and expand the economy. Applicants earn points based on education, English-language ability, high-paying job offers, age, record of extraordinary achievement, and entrepreneurial initiative.

•Retain immigration preferences for the spouses and minor children of U.S. citizens and legal permanent residents while eliminating preferences for certain categories of extended and adult family members.

•Limit refugees offered permanent residency to 50,000 per year, in line with a 13-year average.

As President Ronald Reagan said, a country without borders is not a country. We are a nation of immigrants, but legal and invited immigrants who want to become Americans, not kill Americans. End Schumer’s diversity visa lottery, pass the RAISE Act, and hand Chuck Schumer a hankie to cry into.