A radical leftist upstart’s unexpected primary trouncing of a key member of the House Democratic leadership is sending shockwaves through the Democratic Party establishment.

Democratic Socialists of America (DSA) member and first-time candidate Alexandria Ocasio-Cortez, a 28-year-old of Puerto Rican ancestry, crushed longtime U.S. Rep. Joe Crowley, a 56-year Irish-American Catholic, in the primary election June 26 for the 14th congressional district in New York, covering parts of the boroughs of Queens and The Bronx. Ocasio-Cortez, who previously worked as an organizer for Sen. Bernie Sanders’ presidential bid, garnered 57.5 percent of the vote compared to the 42.5 percent Crowley earned.

Of course, democratic socialism is a profoundly dishonest euphemism calculated to make the horrors of communism more palatable.

As I’ve written before, 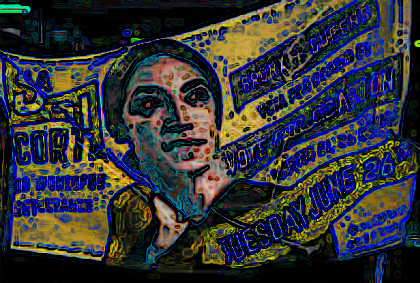 Karl Marx thought of socialism as a necessary way station on the road to the supposed utopia of communism. The question of socialism versus communism is a never-ending debate in academic circles, and it is one that is too involved to get into here. Suffice it to say that socialists and communists all want government or the collective to be master. They all subscribe to bad, un-American ideas, are all in the same ideological camp, and all tend to believe that the ends justify the means. In ideological terms, there is no bright line or safe harbor that neatly separates socialism from communism. They overlap and blend into each other.

Communism, according to Marx, was a kind of heaven on earth and he was its foremost proselytizer. He argued that human beings could be changed and made to reject their natural, selfish, family-oriented impulses. When this happened, everything would supposedly change for the better. People would voluntarily work hard for a society filled with abundance so there would be no need for governments, taxes, armies, police, courts, and jails. In such a society the principle of 'from each according to his ability, to each according to his need' would prevail.

But before this (impossible) idealized condition can be achieved, there has to be socialism. The working class, according to Marx's theory, disgusted by the supposed evils of capitalism and the misery they feel it inflicts on them, transforms the capitalist nation in which workers are mercilessly exploited, into a socialist state. Under socialism, in theory the 'means of production' -- factories, raw materials, machines, the labor force and the system by which it is organized -- are controlled by the people through a powerful government. The 'relations of production,' that is, the relationship between those who invest in and control industries and those who work in those industries is forever changed. The government steps in on behalf of the people and imposes what some call 'economic democracy,' theoretically giving workers control over their workplaces.

Meanwhile, Daniel Greenfield isn’t convinced the voters of the 14th district acted based on political ideology.

I'm sure the voters liked Cortez's promises of free stuff for everybody, but politics, especially in big urban cities, is often ethnically tribal. The simplest explanation is that Crowley's district had changed ethnicity in a way that made him vulnerable to a Hispanic challenger.

When your district is 46% Hispanic, 24% white and 10.9% black, you don't need Karl Marx to explain why Cortez beat Crowley. And the media is dishonest for pretending otherwise.

Greenfield may have a point.

As the Washington Post’s Dana Milbank observes in a rare moment of honesty:

Analyses indicate that first-time Democratic candidates this year tend to be more liberal than incumbents, but the entire party has moved to the left. There is no "civil war" within the party because no one is pushing back against the progressives' rise — a rise that comes in reaction to Trump but also reflects the growing prominence of women, minorities and young voters in the electorate.

That said, the photogenic Ocasio-Cortez beat Crowley by running on an extreme-left utopian fantasy platform of abolishing the U.S. Immigration and Customs Enforcement (ICE) agency, providing Medicare for All, and guaranteeing jobs for all.

Ocasio-Cortez is not only kooky – she’s an ignoramus. In one media interview the newly anointed leftist folk hero seemed to confuse ICE with the CIA.

ICE’s “extrajudicial nature is baked into the structure of the agency and that is why they are able to get away with black sites at our border with the separation of our children,” she said during a journey into fact-free paranoia on CNN June 27.

Ocasio-Cortez attacks more moderate Democrats for trying to impose any kind of restraint on federal spending, accusing them of pushing the notion that “we’re going to austerity our way into prosperity.”

But Ocasio-Cortez did claim an impressive scalp on the way to her primary victory: Queens Democratic boss Crowley is chairman of the House Democratic Caucus, the fourth-highest leadership position among House Democrats.

Ocasio-Cortez’s win suggests more upheaval may be on the way in the Democratic Party where fevered hatred of all things Trump and Republican threatens to make Democrats unelectable in all but the most hardcore Democrat districts across the nation.

In this sense her victory bears more than a passing resemblance to now-Rep. Dave Brat’s (R) shocking upset primary victory over then-Congressman Eric Cantor in Virginia’s 7th district in 2014. At the time, Cantor was House majority leader, outranked only by then-Speaker of the House John Boehner. Conservative and Tea Party revulsion at the GOP congressional leadership helped get the brash conservative champion Brat over the finish line and helped to move House Republicans to the political right.

Ocasio-Cortez’s victory should serve as a warning to all Democrat office-holders that the far-left policy positions of the past may not be enough to satisfy the angry Democrat mobs that now identify with the violent radicals of Antifa.

“The people of NY-14 demanded more from its [sic] representative than empty promises and deep pockets,” said Christian Bowe of DSA’s National Political Committee. “We’re proud of this victory, and we know this is only one of many more to come.”

DSA, a small-c communist group, is on the rise because the Left is in revolt against the Trump administration and perhaps because Bernie Sanders popularized the “democratic socialist” label, taking away much of the stigma traditionally associated with socialism.

On June 27, the day after Ocasio-Cortez unseated Crowley, DSA experienced a one-day membership surge 35 times larger than normal. DSA employee Lawrence Dreyfuss said that day the group signed up 1,152 new members. In the month after President Trump was elected, DSA claims to have had approximately six times more sign-ups than in the preceding month. The group now claims to have 40,000 members nationwide, up from around 5,000 in November 2016.

DSA has made inroads at the state level over the past year.

Democratic Socialists of America is also affiliated with the terrorists of the Antifa movement.

Antifa are the self-styled anti-fascists who embrace fascist tactics and who have regained prominence in the post-Obama era for assaulting conservatives. Antifa trace their roots back to Nazi Germany where they opposed the Sturmabteilung (SA), or Nazi storm troopers, but copied their tactics, using their fists to shut down political opponents and break up meetings and rallies. The anarchists and communists of the Antifa movement are notorious for promiscuously labeling those they target as “fascists,” Nazis, and racists.

DSA activists use Saul Alinsky-approved tactics to get in the faces of their enemies.

“How can you enjoy a Mexican dinner as you’re deporting and imprisoning tens of thousands of people who come here seeking asylum in the United States?” a DSA member yelled at Nielsen. “We call on you to end family separation and abolish ICE.”

One of the disrupters has been identified as Allison B. Hrabar, a paralegal who works in the Technology and Financial Services Section of the Department of Justice’s Antitrust Division. DoJ is reportedly investigating the incident but hasn’t taken action against Hrabar, who studied at Swarthmore College.

“Oppressed people have never been given their rights by asking politely,” Hrabar said. “Kirstjen Nielsen is not going to be convinced by us politely saying ‘could you maybe not separate children from their families? Could you maybe stop detaining and deporting migrants who have done nothing wrong?’”

And Congresswoman Alexandria Ocasio-Cortez (D-N.Y.) will be right out in front leading them.

Antifa trace their roots back to Nazi Germany where they opposed the Sturmabteilung (SA), or Nazi storm troopers, but copied their tactics, using their fists to shut down political opponents and break up meetings and rallies.

While superficially true, the above omits some really important history, that without the existential threat reinforced with all types of violence from the USSR and the German Communist Party (KPD, more details on request), the Nazis would have never gotten anywhere. About a year before the Nazis gained power, the Wiemar government banned the KDP's paramilitary organization, and Antifaschistische Aktion, complete with the same symbol still used to day, was their next and final one.