Climate experts call out new federal report for hiding the decline in hurricanes – ‘Were they thinking no one would notice?’

The so-called "Deep State" doesn't simply exist in the Department of Justice or Obama holdovers in the FBI. The infestation of leftist bureaucracts, synonymous with the Democrat Party, occurs in every department of the federal leviathan.

No better proof exists than the climate report released by "14 federal agencies", in which temperatures are predicted to rise more than 15° because, yes, Americans are screwing things up for the rest of the world.

What if the doctor said you had treatable cancer and then told you to ignore it? That’s essentially the Trump administration’s approach after the release of a devastating new federal report on climate change.

The Fourth National Climate Assessment, a report mandated by Congress and produced by 13 federal agencies, says “the impacts of climate change are intensifying across the country...how much they intensify will depend on actions taken to reduce global greenhouse gas emissions.” This study is a deeply researched account of the damaging effects of unchecked climate pollution on our water, agriculture, transportation, air quality, communities and health. Its findings were endorsed by NASA, the Department of Defense, and experts at 10 other federal agencies.

The author of this piece of propaganda, one Elizabeth Gore, is Environmental Defense Fund’s senior vice president of political affairs. 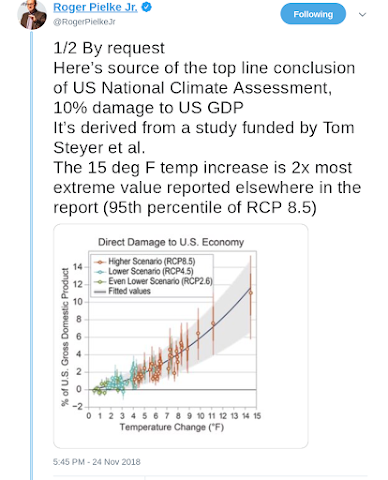 There are no mentions, of course, of the failed predictions of years past. Remember, the ice-caps would be gone by 2010, sea levels would rise by 15 feet by 2017, etc.

The problems with this report by Obama holdovers in the Deep State are many. Climate experts destroyed the report for obvious reasons:

Climate expert Dr. Roger Pielke Jr. stated that "...the claim of economic damage from climate change is based on a 15 degree F temp increase that is double the "most extreme value reported elsewhere in the report." The "sole editor" of this claim in the report was an alumni of the Center for American Progress, which is also funded by [left wing activist] Tom Steyer."

Climatologist Dr. Pat Michaels called the report ‘systematically flawed’ and stated that it ‘should be shelved’.

Dr. Ken Haapala made an astute observation. He said that, '...the global warming chorus immediately seized on the new USGCRP report claiming the Trump administration is contradicting President Trump’s claims about global warming. Amusingly, some of the chorus interviewed people who worked on the USGCRP... were political appointees under the Obama Administration.' 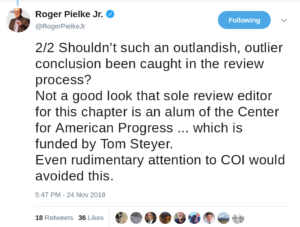 Greenpeace co-founder Dr. Patrick Moore added that the "...science must be addressed head-on. If POTUS has his reasons for letting this Obama-era committee continue to peddle tripe I wish he would tell us what they are."

Dr. John Dunn stated that "Two years into the Trump administration it is sad to see this 400-page pile of crap."

As Climate Depot's Marc Morano observed, the report "is a political report masquerading as science. The media is hyping a rehash of frightening climate change claims by Obama administration holdover activist government scientists. The new report is once again pre-determined science. The National Climate Assessment report reads like a press release from environmental pressure groups — because it is! Two key authors are longtime Union of Concerned Scientist activists, Donald Wuebbles and Katharine Hayhoe.

The report, like anything produced by the bureaucrats in Washington, is simply designed to grow government and promote a globalist form of socialism.

Their perfect record of failed predictions is embarrassing, but never mentioned by the propagandists in legacy media, because government funding is at stake. Remember all of their failed prognostications, because they won't.

I am reliably informed that there was no incentive for these scientists to create a report that totally justifies their continued funding. Also, the only climate reports that are driven by ideology are reports that disagree with their conclusions. Plus, found 13,426 votes for the Florida election stapled to the back of the report. Gotta be legit.

Climate change via CO2 was always a money scam from the beginning. And those promoting always have more money and live in a far bigger house than I can ever afford even though they are just one person.

I've lived along the Texas coast all my life and according to Al Gore and other union of concerned socialist scum, Padre Island should have already become the world's longest sandbar. But it hasn't.