NOT THANKFUL FOR NPR: National Public Radio is a National Disgrace

Someone unfamiliar with NPR's programming might assume that the network, given its reliance on taxpayer funding, would attempt to represent a broad set of political viewpoints.

Its stories, covering topics as diverse as climate science and the Second Amendment, universally adopt adversarial positions against the right. Furthermore, NPR operates as a de facto public relations arm for the Democrat Party. Its massive distribution network promotes far-left policy positions by employing creative tactics that all intellectually honest listeners should understand and deconstruct.

When you listen to an NPR program that entertains political "debate", listen for the following elements: 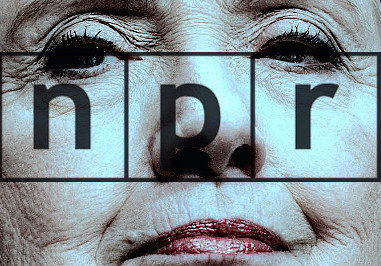 1. Their subjects: NPR always selects the most sympathetic and downtrodden subjects to illustrate its policy positions. Consider immigration and the issue of DACA; its programs will carefully select, say, a DACA recipient who is an excellent student or a promising entrepreneur. Using these carefully curated examples, NPR will effectively decry immigration enforcement and American national sovereignty.

2. Their sound effects: Its reporters are quite adept at picking up sounds from "the street". If a story focuses on the migrant caravan headed for the southern border, you will hear the clanks of pots and pans as a meal is being cooked, or the cries of a young child being transported north.

3. Their intended emotional responses: The subjects and sound effects have a single focus: to generate emotional responses that influence public opinion. By tugging at the listener's heartstrings, NPR's intent is to spur anger or anxiety: "How can those cruel Republicans stop these innocent children from getting into the U.S.?"

The pattern is simple and direct.

Now that you know the formula, consider the following ways to refute the propaganda:

1. The unheard-from: Remember who is given a forum on NPR. Take the issue of DACA. Given the rampant, documented criminality of illegal aliens -- roughly one-third of the U.S. federal prison population is in the country illegally -- one could rightly ask whether Barack Obama's DREAMers are, by and large, and law-abiding and self-reliant residents. A right-wing version of NPR would interview the police officer who was shot, point-blank, by a DACA recipient and thankfully survived. Sound effects would include body-cam recordings of gunshots that are replayed over and over.

2. The facts: Recognize that emotional responses to NPR's carefully curated stories are generally poor approaches to arrive at public policy positions. Facts, logic, reason and history should contribute heavily to rational policies, wherein we can learn from the past and course-correct efficiently and effectively. Consider the issue of climate science: NPR never goes back and reviews its predictions from decades past regarding the rise of sea levels or the melting of icecaps. It never reported the "Climategate" scandals involving scientists who hid climate data and manipulated mathematical models.

NPR is, truly, a national disgrace.

Its repudiation of fair reporting and its incessant focus on serving as a Democrat public relations outlet should render it ineligible for taxpayer funding.

American citizens interested in open debate should never contribute to NPR and should demand that Congress end taxpayer subsidies for its propaganda.

Following up your 2 May piece by Rep. Louis Gohmert -

Rather than try and fix it (which a minority of Conservatives cannot accomplish), I recommend that the Trump administration simple sell it to the aforementioned Progressive Socialists for $1.00 and then let them fund their own propaganda rather than have me, and taxpayers like me, foot the bill for a "voice from the airwaves" that we do not care to listen to.

Actually NPR exists as a tax-payer funded entity only because both parties--who compose the Washington establishment and their big buck donor friends--want it to exist.
Power trumps(no pun intended)what is just, right, and good for the nation.