Unfortunately, Todd turned out to be a disastrous choice. Todd’s extreme partisanship is perhaps guided by his wife (Kristian Denny Todd), who openly runs a Democrat propaganda operation. The firm provides “direct mail and consulting services for Democratic candidates and progressive causes.”

But Todd himself appears to be nothing less than a Democrat activist. While in college, Todd worked for the radical Marxist Tom Harkin (D-IA) who, in many respects, foreshadowed today’s far left 2020 Democrat candidates. Put simply, he was Bernie Sanders version 0.1. 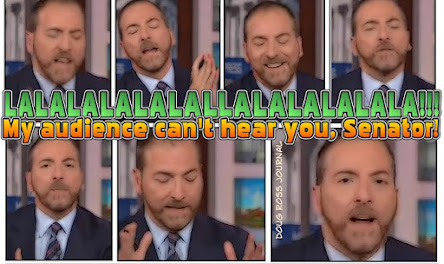 Which means Todd is only down nearly twenty (20) percent since the Russert era.

I’ll make a prediction here and now: Todd’s recent treatment of Senator Ron Johnson (R-WI) -- when the MTP host actually shouted the Senator down -- was a disgrace. An embarrassing disgrace. When Johnson raised his firsthand knowledge -- not hearsay -- of Trump’s conversation with Ukraine’s president, Todd yelled at him about a “Fox News conspiracy.”

After seeing this debacle, author and radio host Mark Levin offered Sen. Johnson a coveted, one-hour slot on his Sunday night show to explain his firsthand experience dealing with President Trump and the President of Ukraine.

As an aside, Life, Liberty & Levin airs each Sunday at 10pm Eastern and attracts more than 2 million viewers each show.

Life, Liberty & Levin is everything Meet the Press once was. Chuck Todd is a nakedly partisan moderator -- he actually bans scientists from his show if they disagree with the Communist-inspired Green New Deal -- and a man who has no business anywhere near a real news operation.

Mark Levin, on the other hand, asks his guests open, not leading, questions. They articulate honest views in a unique, hour-long format.

In other words, Levin's show is what Meet the Press once was, long ago.

2020 The Element of Surprise
Spoiler Alert:
Hillary, wouldn't be a SURPRISE attack.
Spoil the tsunami, stop the wind from the mast of tyranny by outing Michelle Obama. THAT! would.
You get the same dynamic of the Clinton's
You Circumvent term limits get Obama in the White House

China must be funding all of this turmoil.

Mr. Levin is a top notch representative of the real America view. Thank you for up front a real. The Great One.

Ill watch MTP before FOX anyday, at least you get some news vs propaganda

This article reads as more of a commercial, poorly disguised as an opinion piece, by which I mean a hit job. But I've read worse.

Fire Chuck Todd...long overdue...he does an absolute terrible job!!!! Face The Nation going down the tubes.

I watch MTP a lot. Until recently, one of the things I liked most about Todd is I couldn't tell what side he was on. But w recent events I can see where any journalist or moderator would get frustrated w the republicans non answer answers. I can only assume they're too afraid of their pussy grabber in chief to answer any real questions. Really they should be ashamed.

This article is about Meet The Press.... NOT Face the Nation, idiot! Nice to know you don't have a clue, just an opinion.....

Chunk Todd is an idiot, another political hack

Thanks but no thanks!

The nation is GOING DOWN THE TUBE- RULES ARE NOT EVEN BEING FOLLOWED! GOP took an OATH of office they are not abiding by. GOP IS BACKING MANY LIARS, THEIVES- now the WHITE HOUSE IS CORRUPT!

This is my third comment and I would like to see it published this time. I really like Chuck Todd and I think he is more than fair to both parties. He was probably fed up with Senator Ron Johnson's blind faith toward the president and his refusal to see the obvious or answer any questions that might enrage Trump. Enough is enough with these blind republicans who insist on carrying Trump's water no matter how obvious his lies or poor decisions may be. I wonder what Senator Johnson thinks now with the latest information about Trump's obvious quid pro quo and botched decision to leave our long time allies to die at the hands of our enemies. Mr Trump has our friends and enemies reversed in his muddled brain and should not be in charge of a pet shop let alone the country. He needs to go and so does Ron Johnson and all the other republicans and even some democrats who continue to support this man.

I really like Chuck Todd.I also watched when Tim Russert hosted.
I think he is doing a good job. I also like Chris Matthews. I
wish him well. I heard he has some health issues.

Seems that there are almost no "objective" newspeople now. Either you are on the right side (theirs) or you are worthy of contempt. I try to listen to the other side but get so turned off by the insults that I can't stand to watch. I'm sure some folks who disagree with me try to do this too with the same result. But folks - if we don't start listening to each other things will only get worse.

Anyone who remotely thinks Chuck Todd or the modern day left wing media circus channels are politically correct are apparently as ignorant as Nancy Pelosi and Chuck Schumer. It's amazing to see how one sided Adam Schift is and how they conduct themselves behind closed doors because the rest of the real world has awoken and realized that being a Democrat is as stupid as believing Hillary Clinton was ever worthy of even being a candidate for the white house! You people are morons and you should get a life and not a socialist one!!!

Yes the non answers get wearisome. Must be frustrating.