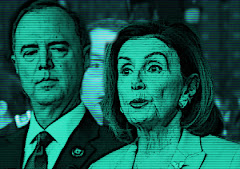 Lt. Col. Alexander Vindman, the latest star of the Democrat effort to undo the 2016 election, is still at work on the National Security Council. While Trump supporters on the NSC like Rich Higgins and Ezra Cohen-Watnick were forced out, Vindman won't be. NSC staffers who criticized Obama holdovers or sought to expose their misbehavior are gone, but Vindman is still there while undermining Trump.

And that’s the SNAFU of things on the NSC.

The National Security Council has been ground zero in the campaign against President Trump from the beginning. General Flynn’s appointment as National Security Advisor had touched the third rail because the NSC had been used to coordinate anti-Trump operations in the Susan Rice era.

The NSC doesn’t answer to Congress. Its members are meant to advise the president. (Except when they’re actually working for a previous president.) They command the implements of foreign policy, traditionally the weakest element in domestic politics, but not when they start treating their domestic political opponents as agents of a foreign state. And the size of the NSC has gotten out of control.

Under Obama, the NSC staff hit 400 people. That’s up from a dozen during its Cold War origins.

And it’s the staff that’s the problem. The NSC was born in the Truman era, not as a byzantine government bureaucracy full of endless departments and hundreds of staffers, but as a means for key foreign policy and national defense figures to coordinate, develop options and then present them to the President of the United States.

People like Vindman or Fiona Hill were never supposed to be there.

In the 1947 National Security Act, the Council was to consist of the Secretary of State, the Defense Secretary, the heads of the branches of the military, and various strategic services and agencies, who would meet at sessions presided over by the President.

There was also to be a staff "headed by a civilian executive secretary".

What started out as a formal kitchen cabinet turned into a monster. And that didn’t exactly take decades. The NSC staff was at 50 people under George H.W. Bush. It hit 400 under Obama.

President Trump’s move to prune back the NSC is worth doing. But reorganizations of the NSC have been carried out before. Bureaucracy is the urban weed of Washington D.C. And even when it’s occasionally pruned, it always grows back. The only solution is to pull it up by the roots.

The NSC was meant to be a forum in which the heads of existing agencies would coordinate foreign policy and national security options. Instead, the NSC’s staff tends to set the foreign policy. What was once a support structure turned into a think tank and a policy shop. And then its very own deep state.

The very worst example of this was Ben Rhodes, an aspiring novelist who evolved from a speechwriter to deputy national security adviser for communications, and, in that capacity ran our foreign policy. War and diplomacy weren’t run by the cabinet members accountable to Congress, but by political operatives.

The NSC had become a state within a state, a rogue organization reporting directly to Barack Obama.

This wasn’t Eisenhower’s military-industrial complex or the deep state, it was something worse. It allowed a gaggle of political operatives to take control of national defense and intelligence, and retool them to spy on political opponents, to manufacture cases against them, and then to act as moles within future administrations with the aim of subverting them and perpetuating their old political agendas.

The NSC violates constitutional checks and balances. It undermines the rule of law. Its current function is an absurd perversion of the simple and straightforward purposes that it was meant to serve.

A coordinating body for national security and foreign policy may be a good idea. But the NSC isn’t it.

What would we do without the NSC? Agencies and departments would actually formulate policies internally and cabinet members would offer them to the president instead of the NSC acting as a rogue policy shop with the National Security Advisor competing with the cabinet members he is meant to be coordinating with. That would cut out some of the infighting and increase congressional accountability.

Old NSC scandals involved its people overriding and sidelining the Pentagon, the State Department, the CIA, and determining and implementing policy on their own. Those scandals of departmental infighting seem almost nostalgic now that NSC personnel are working to actively oust a sitting president.

It needs to go.

That’s not something that might be achievable right now, but it should become a Republican goal. The Flynn case and the latest impeachment bid are warnings that the NSC has become a toxic organization.

Traditionally, Republicans have been proponents of the NSC. Eisenhower and Nixon had expanded the NSC, while Kennedy and Carter had contracted it. But that pattern began to shift with the Clinton era, and fundamentally altered under Obama. The current NSC is a creature of the Clinton and Obama eras.

But the Obama administration only completed the corruption of an organization that had lost its way.

Abolishing the NSC will, in some ways, be a policy victory for the Left. But the Left has shown that it can do far more damage with the NSC, than without it, and that makes it too dangerous to exist

The NSC was meant to counter problems like the military-industrial complex or the deep state by organizing their functions and putting them more directly under the control of the White House. That plan worked so well under Obama, that White House political operatives used the NSC to take control of intelligence, the military, and law enforcement, and weaponized them against Republicans.

The central principle of politics is that proximity is power. The NSC was only meant to coordinate. Its staff were only meant to support. But the very act of creating an organization that would advise the president also made the position irresistible to men like Kissinger and Brzezinski who used it as a means of accumulating vast amounts of unchecked power. And after the National Security Advisor’s power had been rolled back, it was the anonymous staffers who picked it up and ended up in the driver’s seat.

Then it was just a simple matter of blowing up the staff and padding their ranks with political operatives.

Suddenly, the NSC was no longer overthrowing foreign governments, but our own government. And previously unknown NSC staffers in a byzantine organizational chart had become key figures in the war.

And, these days, it’s not a war on foreign enemies, it’s a war against President Trump and his voters.

The current crisis shows that we can’t have both the NSC as well as free and open elections.

A free country can’t afford the hybrid Democrat think-tank and pretorian guard that the NSC has become. It’s time to dismantle it, declassify and release all NSC activities involving the domestic political opposition, and go back to the way foreign policy and national security were run for over 200 years.

Either that or abolish elections and put the NSC in charge of running the country.

why cant the president fire all of them now and shut it down? it is a part of the executive branch

The National Security Counsel definitely needs to be disbanded. However given all of the illegal spying on American citizens and especially the illegal spying by the Obama
Administration's Intelligence Community against the Dems' opposition party candidate BEFORE and AFTER the 2016 General Election, it's clear that 17 intelligence agencies are 16 more agencies than needed to spy on foreign citizens and foreign countries!

These people have not acted to protect and defend our country. They have only been interested in acquiring power they lost when the American people voted to elect President Trump. They need to be in prison and not spying on Americans!

@anon 656 - you are correct. the executive, vested in the presidency, controls all functions of the branch. great point.

@anon 712 - painfully in agreement with you. but i'll take any step of reform we can get.

I completely agree with firing them all. When a new admin comes in, esp Repubs, they need a full list of all of these people - whether it's 1,000, or 10,000 people - showing when and who appointed them. Opposition holdovers need to be either fired, or if protected by some civil service laws, need to be reassigned to Nome, Alaska. Same with any suspect military personnel in these offices. New assignment to Afghanistan.