Let's take each in turn and determine whether the Democrats and their public relations arm -- the mainstream media (MSM) -- qualify. 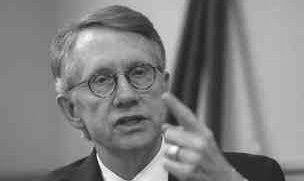 Direct [enemy] commanders' thinking and force them to make errors by attacking cognitive and belief systems: In declaring the war 'lost', Democrat Harry Reid has attacked U.S. commanders' belief systems. Reid has plainly stated that commanders are waging a pointless war and -- in the words of military blogger COB -- has thereby placed a very real stake in the ground: 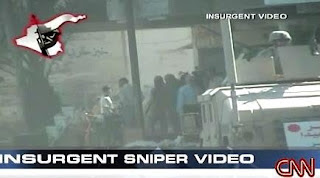 Generate heavy psychological pressure by using intimidation to signal inevitable [enemy loss] concentrating forces and coordinating information networks [such as mainstream media]: The mainstream media has, for the last several years, rallied around the meme that "Iraq is Vietnam" and various calls for retreat and surrender (see Murtha, Reid, et. al.). ABC, CBS, CNN, NBC, MSNBC, PBS, The New York Times, The Los Angeles Times, The Boston Globe, and other major print and broadcast outlets have studiously ignored the facts surrounding the Iraq War and the rise of global Islamofascism. Instead, the MSM has called attention to car bombings and -- by historical standards -- a very low death rate among U.S. forces. 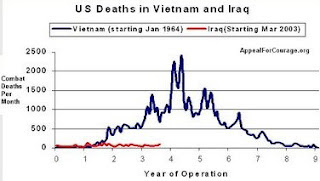 Gateway Pundit also points out that the MSM/DNC's drumbeat has been picked up by the foreign (and some would say "enemy") press. That is, The Tehran Times, Al-Jazeera, Al-Sharq Al-Awsat, and Iran Press TV have all led major stories with Reid's statement. The Volokh Conspiracy concludes, "it seems to me hard to doubt that this statement will have grave cost." 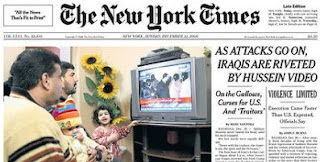 Hide reality by creating a fictitious reality: The New York Times is the poster-boy for a fictitious reality. As the standard-bearer for much of U.S. media, the Times provides a template for other outlets to follow. And consider its Al-Qaqaa fabrications synchronized to impact the 2004 Presidential Election; its unleashing details of Saddam Hussein's active nuclear weapons program -- ostensibly to discredit Republicans -- just hours before the 2006 Congressional Elections; its revelations of classified programs including monitoring of international calls to terrorist enclaves, phone-number call analysis, and SWIFT; its 'selective' censorship of the National Intelligence Estimate... all are simply examples of a blinkered, rapidly spinning and fictitious reality designed for a single purpose. And that purpose is to coerce Americans into a hopelessness, a loser's mentality; so that America itself will lose any war in which it might engage. 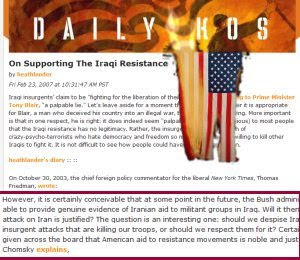 Mislead the enemy by pretending to follow his wishes: Democratic leaders routinely state that they, "support the troops." Yet, the leadership has wildly -- and some would say schizophrenically -- switched positions on the war. Just a few months ago, Democratic leaders such as Harry Reid and Silvestre Reyes were in favor of a troop surge. They unanimously confirmed Defense Secretary Robert Gates and Army General David Petraeus.

Yet, only days later, the Democratic leadership began a campaign to undermine the troops and their mission using every tool in their information warfare arsenal. All the while, Democrats continue to pretend that they support the troops while their very statements embolden the enemy. 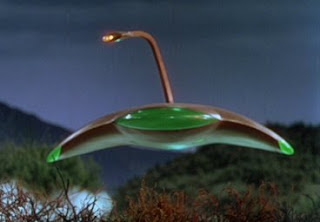 Imagine it's the year 2020. An Alien invasion force has landed on the Earth in multiple locations. Possessing many forms of advanced weaponry, Alien forces inexorably obliterate city after city, razing each to the ground and killing every human that stands in their way. Would the likes of Reid, Pelosi, and Murtha hem and haw; decry our military's attempts to defend the Earth; and visit alien leaders in vain attempts to negotiate?

Well, news flash. Iran's mullahs are Hitler with nukes. Worse, they represent only the leadership of a worldwide, nihilistic cabal of extremists bent on destruction. Or are the attacks in Manhattan, Washington, Bali, Beslan, Madrid, London, Iraq, Uzbekistan, Israel, Mumbai, Kashmir, Thailand, Darfur, Somalia, Australia, Indonesia, and the Philippines not connected? Not according to the Democrats and the MSM. 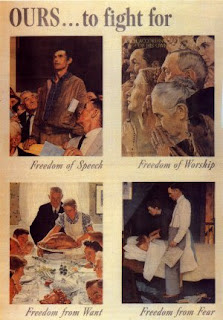 Put simply, the Democrats and their public relations arm -- the MSM -- are successfully waging information warfare against the United States military. No war, not even a global conflict against an intergalactic alien invasion force, can be won with the useless, treasonous, and duplicitious "opposition" party represented by today's Democratic leadership.

We need patriotic Democrats in power -- not this despicable crew -- and I fear it will take major bloodshed on American soil in the form of yet another terrorist attack for it to happen.

Update: Dan Riehl is even more upset than I am... and that's saying something. And Jules Crittenden takes note of Andrew Sullivan on the Reid resignation issue.