When the going gets tough, the tough 'lead from behind'. In this case, the President invested his time wisely in preparing music videos and a lengthy monologue at the White House Correspondents' dinner. 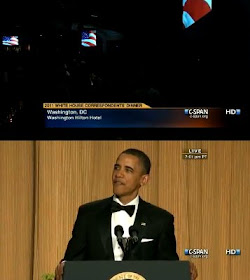 ...And where is the National Public Radio table? (Cheering.) You guys are still here? (Laughter.) That's good. I couldn't remember where we landed on that. (Laughter.) Now, I know you were a little tense when the GOP tried to cut your funding, but personally I was looking forward to new programming like "No Things Considered" -- (laughter) -- or "Wait, Wait...Don't Fund Me." (Laughter.)

Of course, the deficit is a serious issue. That's why Paul Ryan couldn't be here tonight. His budget has no room for laughter. (Laughter.)

...You know, in the last months, we've seen journalists threatened, arrested, beaten, attacked, and in some cases even killed simply for doing their best to bring us the story, to give people a voice, and to hold leaders accountable. And through it all, we've seen daring men and women risk their lives for the simple idea that no one should be silenced, and everyone deserves to know the truth.

For a minute there, I thought he was talking about the brave souls at The San Francisco Chronicle.