Relayed by Weasel Zippers, an important story from Digital Spy:

Muslim comic creator of The 99 threatened by ISIS

Which is ironic because the creator of The 99 wanted to show the “message of tolerance and peace” in Islam... 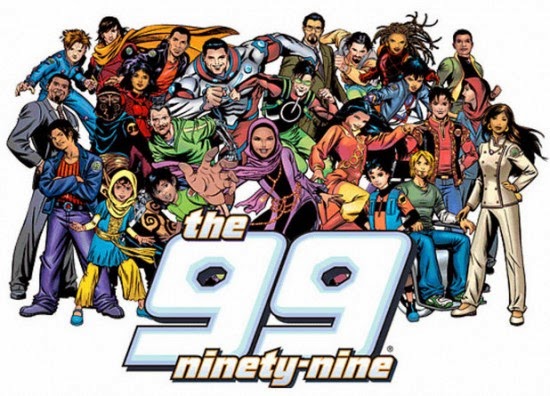 The Muslim creator of The 99 comic series has been threatened with death by ISIS.

The jihadist group known by the full name of the Islamic State of Iraq and the Levant have called for the murder of Nayef Al-Mutawa, who they accuse of mocking Allah.

“Who can kill Nayef Al-Mutawa who makes fun of Allah’s names?” wrote ISIS on Twitter, according to Kuwait Times.

The 99 centres around a group of superheroes, each of whom embodies one of the 99 attributes of Allah.

Al-Mutawa created the series with the explicit purpose of celebrating the “messages of tolerance and peace” in Islam.

Which reminds me: I keep checking CAIR's Twitter feed to see if they've denounced the genocide of non-Muslims by the barbaric throwbacks called ISIL. Here's what I've found.