It must be really, really bad.

I say that because The New York Times just dropped a dukie on the Podesta brothers.

If the Times is on the case, its editors obviously feel this story is going to break like a tidal wave across the political landscape, with or without them.

[John] Podesta’s older brother, Tony Podesta, has been ensnared in the investigation by Robert S. Mueller III, the special counsel, into Russia’s meddling in the race and whether it involved any associates of President Trump. The efforts by his firm, the Podesta Group, to win support for the agenda of Viktor F. Yanukovych, the Russia-aligned former president of Ukraine, were cited in an indictment handed down last month against two former campaign aides to Mr. Trump, Paul Manafort and Rick Gates, who arranged the Ukrainian lobbying work.

Neither Tony Podesta nor anyone at the Podesta Group has been publicly charged in the case. But Mr. Mueller has subpoenaed the firm and its employees for documents and testimony related to their work and interviewed roughly half a dozen people about Tony Podesta’s involvement. And as the Podesta Group has withered under the scrutiny, its employees were informed in a tearful meeting on Thursday that they may stop receiving paychecks after next week, according to people in attendance.

...John Podesta, 68, served as a top White House aide to the last two Democratic presidents, Bill Clinton and Barack Obama, and was believed to be in line as White House chief of staff if Mrs. Clinton had won the presidency. In between campaign and White House stints, John Podesta helped to create and run some of the leading institutions on the American left, including the Center for American Progress think tank, and provided policy and political advice to generations of Democratic politicians and operatives.

Tony Podesta, 74, built one of the highest-grossing lobbying firms in Washington, signing clients across industries and ideologies — including defense contractors like Lockheed Martin, banks like Wells Fargo, drug makers like Mylan and foreign regimes like the government of the former Egyptian dictator Hosni Mubarak. Tony Podesta is known for his fund-raising — in 2016, he donated or raised nearly $900,000 for Mrs. Clinton’s campaign and the Democratic Party — as well as for a lavish lifestyle.

Had Mrs. Clinton prevailed, as official Washington expected, it most likely would have cemented the legacies of both brothers — John Podesta as a key confidant to presidents and one of the most important Democratic strategists of the past century, and Tony Podesta as the go-to lobbyist for Democratic administrations. Instead, the Podestas have been drawn into the vortex of investigations and conspiracy theories that have enveloped Washington in the Trump era.

Tony Podesta stepped down from his firm hours after it was obliquely referenced in the indictments of Mr. Manafort and Mr. Gates, though he had been in talks about leaving for months. It is unclear what will happen to his investment in the Podesta Group, which has been hemorrhaging clients and employees, both because of the mounting scrutiny and because businesses are looking for lobbyists with connections to the Trump administration, according to interviews and lobbying filings...

...Some firm partners are starting a new firm next month called Cogent Strategies, in which Tony Podesta will have no stake.

Last week’s indictment did not name the Podesta Group or another firm with which it worked on the Ukraine account, Mercury Public Affairs. Instead, the indictment referred to them as “two Washington, D.C., firms” that were recruited by Mr. Manafort and Mr. Gates.

While both firms disclosed the work to Congress under less-rigorous domestic lobbying rules, they did not initially register under the Foreign Agents Registration Act. The indictment alleges that was done intentionally — by routing the money through a Brussels-based nonprofit — “to minimize public disclosure of their lobbying campaign” that “was under the ultimate direction” of Mr. Yanukovych, his party and his government.

Tony Podesta and his lawyers are working to navigate the issues raised by the Mueller investigation...

...John Podesta, for his part, has dedicated his time since the election to trying to expose the connections between Mr. Trump, his associates and Russia.

After the postelection publication of a dossier by a former British spy into those connections — which included some salacious claims — John Podesta met with Glenn Simpson, the co-founder of the firm that commissioned the opposition research, to compare notes on Russia’s involvement, according to an associate of Mr. Podesta.

During the general election season, the firm’s research was funded by the Clinton campaign and the Democratic National Committee, though John Podesta has told congressional investigators that he had no knowledge of those payments. The associate said the meeting came as Mr. Simpson was considering whether, and how, his firm could continue its Russia-related Trump research. A spokeswoman for Mr. Simpson’s firm, Fusion GPS, declined to comment.

As an aside, Tony Podesta decorates his house with stuff like this: 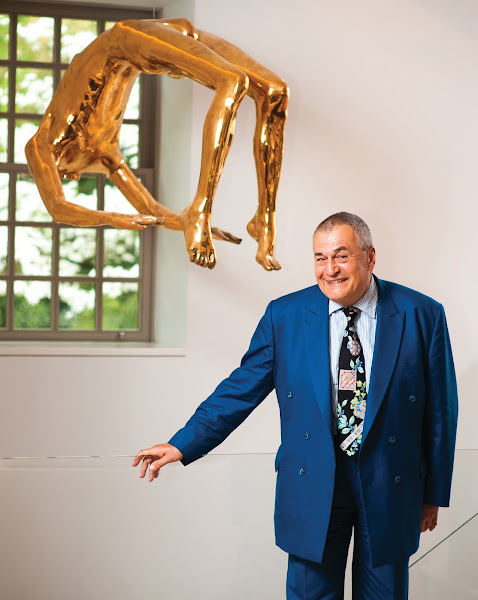 But, no, it's the Pizzagate conspiracy theorists who are weird.