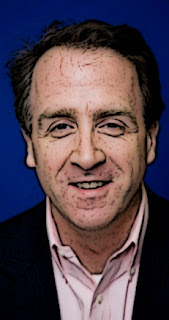 He's a writer for Roll Call, the official periodical of the entrenched Beltway establishment and a dedicated enemy of the American Constitution. If the issue involves promoting big government, no matter how insane, Goddard can be counted on to find a left-wing kook to quote as if that represents a mainstream opinion.

However, if the issue involves promoting normal people -- who live outside the Beltway -- or limited government, Goddard will find a way to ignore or diminish the effort.

Obamacare is one of his favorite programs -- no matter the fact that the entire federal government is teetering on bankruptcy, Cloward-Piven style, as unfunded liabilities near $100 trillion and 40 cents of every dollar the government currently spends is borrowed from generations yet unborn.

Arithmetic was never one of Goddard's strong suits, it would seem.

But when it comes to promoting a program like Obamacare, Goddard is willing to market the most egregious of lies. Consider this classic bit of propaganda -- truly one for the history books -- from earlier this week:

Obamacare Did Not Lead to Increase in Part Time Jobs

The Obama administration contends that since the Affordable Care Act became law, more than 9 out of 10 new jobs created have been full-time.

“The Affordable Care Act continues to improve the functioning of labor markets in a range of ways including helping to slow the growth of premiums, creating affordable new options for small businesses, reducing the ‘job lock’ that can keep workers from taking the best job for them, and generally improving health outcomes and reducing absenteeism. We are already seeing tangible changes in affordability, including premium growth at less than one-third the rate of the late 1990s and early 2000s.”

Jared Bernstein: “You want to hate on Obamacare, I can’t stop you… But the fact is that for now, there’s nothing to see here, folks. Move along, please.”

Now, you have to be a very special kind of ignorant -- or quite a liar -- to rewrite White House press releases as fact. Especially after such gems as "If you like your plan, you can keep your plan", "the average family will see health care premiums will go down by $2,500 a year", and "No one will have to stop seeing their doctor".

Yes, Obamacare has really "improve[d] the functioning of labor markets", that is, if you consider imploding the private sector as "improvement". Got Alinsky?

Take the Obama administration's very own Labor Force Participation Rate, which is the percentage of folks who should be working who aren't. It's now at a 34-year low and still dropping. 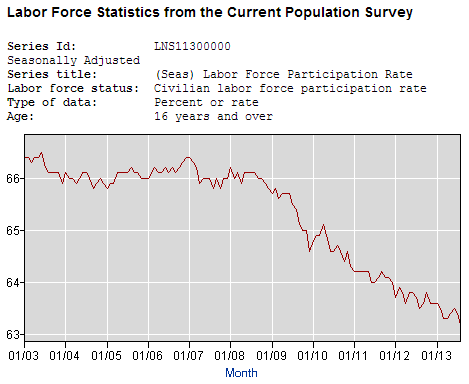 And a full one-sixth of the U.S. is now on food stamps, another all-time record.

And how about about his ludicrous headline, which is as succinct as it untruthful, "Obamacare Did Not Lead to [an] Increase in Part Time Jobs"?

Goddard, seemingly unfamiliar with new technologies like Google News, failed to use the oh-so-difficult search string health care part-time workers. This would have led him to trip over such stories, written in the last 30 days alone, as:

And those are just the first ten I found.

So you have to be a special kind of stupid -- or a rank propagandist -- to try and foist articles like this on the American public.

It's sick. And I'm sick. I'm literally disgusted with people like Goddard, who are helping destroy the fabric of this country in pursuit of some insane Utopian fantasy that can't work, won't work, and has never worked in all of human history.

Goddard believes in the supremacy of a few master planners: some bureaucrats in Washington who will reward his misanthropic behavior with accolades, financial rewards or access to all the right parties. Who knows what his true motivations are?

Perhaps he'll offer us his perspective in the comments.

Or perhaps not, since he seems only able to regurgitate the agitprop of a few far Left Marxists controlling the Democrat Party.

Roll Call should be ashamed for publishing these naked lies, Leni Riefenstahl-style, as if Americans are as dumb as Goddard thinks we are.

But then again, based upon its Alexa traffic ranking this year, the market is offering its own solution to Roll Call's Goddard problem.

Anonymous said...
This comment has been removed by a blog administrator.
9:53 PM

This tendency for the barck-o-rhoids to just cover up and cover up for the man is reflected in a chart I made at the FRED site.

As far as I'm concerned the Congressional Approval rating is much more reflective of the average US Citzen's view of Washington.

Gallup has that number at about 16% Approve.

If you divide the total number of Federal Workers by the total US non-institutionalized population between age 25 and 54, you get about 17%.