In a press conference earlier today, White House spokesman Jay Carney denied that Obamacare was having a negative impact on employment and the economy. 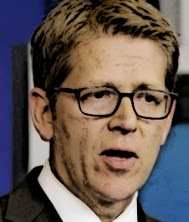 “The aggregate truth … does not bear out claims that the Affordable Care Act is causing employers to drop employees from insurance,” he told skeptical reporters at the daily White House briefing Thursday.

When one reporter asked him to comment on the news that the Securitas security firm has told 55,000 of its employees to find their own insurance on the taxpayer-subsidized markets, Carney replied, “That’s an anecdote.”

...Throughout the briefing, he fended off questions about the economic impact of Obama’s primary legislative accomplishment.

He dismissed a stream of bad-news announcements as unrepresentative of reality.

“You have anecdotes. … There is no systematic evidence. … That has not been happening across the country in any systematic way,” he insisted.

According to an April survey conducted by the Society for Human Resource Management, 41% of 603 small business owners said they have delayed hiring because of the federal healthcare law. One in five already cut hours, while 20% have reduced payroll.

Mercer, a human resources consulting company, said its own survey found that 12% of all U.S. employers reported plans to reduce workers' hours as a direct result of the Affordable Care Act. The impact was more pronounced in the retail and hospitality industries, with 20% of employers saying they will cut part-time hours.

Coming from the same administration that used the slogan "If you like your health care plan, you can keep your health care plan" for a solid year, Jay Carney's lies are not unexpected. Though how such an egregious enemy of the American people can live with himself is a question for historians to contemplate.

These are people's lives that the master planners in Washington are playing with and ruining. They are playing dice with people's lives. And no matter how much damage they do, their ideology prevents them from ever admitting they're wrong.