Jonathan Turley, well-known constitutional law expert (and liberal Democrat!) says Democrats' rushed impeachment process will "go down as one of the greatest historic blunders of a House of Congress."

DOJ: At Least Two of FBI’s Four FISA Warrants ‘WERE NOT VALID’


In a December letter to the United States Foreign Intelligence Surveillance Court, the Justice Department officially determined that at least half of the secret surveillance applications the FBI sought to spy on former Trump campaign adviser Carter Page were illegal.

Larwyn’s Linx: Make Schiff the Center of This So-Called Trial

Schweizer to Levin: ‘Profiles in Corruption’ Is About Whether the Bidens ‘Are Above the Law’: Robert Kraychik
Sen. Grassley Demands Answers From Pentagon On FBI Spy Stefan Halper’s Defense Contracts: Sara Carter
Clinton Corruption Update: What’s $1 Million Between Friends?: BattleSwarm

Don't buy D claim that Biden testimony is irrelevant; that testimony goes directly to the impeachment accusation that Trump acted "corruptly," rather than out of concern about corruption.If Ds want more witnesses, we need to hear from them all.
https://t.co/388RmXNfPf via @WSJ

at 7:23 AM 2 comments
Email ThisBlogThis!Share to TwitterShare to FacebookShare to Pinterest
Labels: Linkfest

The Biden campaign today announced that it was retiring its most recent slogan -- "Where am I? And Why am I here?" -- and replacing it with "Why? Why? Why? Why? Why? Why? Why? You're getting nervous, man!". Hats off to Joe Biden for this innovative political chess move. 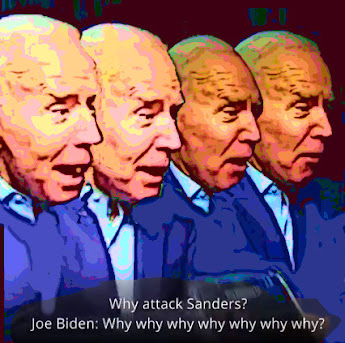 Larwyn’s Linx: Why not a single Republican is poised to vote to convict Trump

Transcript of President Trump Remarks – World Economic Forum, Davos, 2020: CTH
'I’d get up today and do it again': CIA interrogator defends waterboarding in 9/11 trial hearing: Jerry Dunleavy
Trump at Davos: 'We Will Never Let Socialists Destroy Our Economy or Wreck Our Country': Hannity

Puerto Rico’s Secretary of State confirms that there are even more warehouses full of unused aid: Twitchy
Deceit and the Burden of Proof: Raymond Ibrahim
Muslim cleric: “By means of caliphate…your conquest, oh Rome, is a matter of certainty!”: Robert Spencer

The Dem articles fail to charge an impeachable offense as defined by our Constitution. There is no reason to call witnesses in a case that fails to charge an offense. Letting it go much further will be precedent for a future partisan House to impeach a President for any reason.

Democrats Are Impeaching Trump Because They Can’t Beat Him: EIB
The Senate Impeachment Trial: 8 Things You Need to Know: Thomas Jipping
Did You Know Senators Can’t Campaign During an Impeachment Trial?: EIB (10/19)

Here's a point of reference of the shared parking lot between the government offices and the warehouse where the Hurricane Maria Aid was stored. Dem leadership knew🤔🤷‍♂️👀🤦‍♀️👇 pic.twitter.com/gNecjZAG4f

at 5:58 AM 4 comments
Email ThisBlogThis!Share to TwitterShare to FacebookShare to Pinterest
Labels: Linkfest

Since at least 2016, CNN has mostly ceased being a news agency, but that hasn’t stopped it from being an active participant in #TheResistance. The network is so caught up in the fervor of this movement that many of its guests and regular hosts have been fired, reprimanded, or apologized for threats to the president or general obscene references (e.g., Reza Aslan, the late Anthony Bourdain, Kathy Griffin).

Many of its marquee reporters have resigned, were fired, or reassigned for fake-news bias (e.g., Thomas Frank, Eric Lichtblau, and Lex Haris), or came under fire for false reporting (Jim Sciutto, Marshall Cohen, and Carl Bernstein) or have had to offer retractions and/or apologies (Gloria Borger, Eric Lichtblau, Jake Tapper, and Brian Rokus.)

Its anchors have apologized for obscenity (Anderson Cooper) or simply making up false statements (Chris Cuomo), while analysts have been caught in a number of contradictions about their own role in on-going scandals (James Clapper).

The common denominator has been the new journalistic ethos that aborting the Trump presidency justifies any means necessary to achieve such noble ends.

Larwyn’s Linx: Matt Bracken on Richmond: The Mother of All Buffalo Jumps

Trump Hat 2020 Keep America Great Camo MAGA Hat
Matt Bracken on Richmond: The Mother of All Buffalo Jumps: Matt Bracken
Governor Northam Couldn’t Be Setting Up A “Reichstag Fire” Event, Could He?: R.S. McCain
Ahead of Monday’s Pro-Gun Rally in VA, State Senator Warns ‘We are being set up’: RS

Urgent! Volunteers on 1/20 Needed At Richmond Gun Rights Rally: Oathkeepers
An Open Letter To All Those Attending Virginia’s Lobby Day: Cam Edwards
Virginia: Is A New ‘Shot Heard ‘Round The World’ Coming?: Camp o’ the Saints

‘And No One Will Make Them Afraid’: David French
Trump rips Bloomberg over remarks about man who stopped TX church shooter: Carlin Becker
Elizabeth Warren Questions If Americans ‘Want Someone Who Lies To Them’: Peter Hasson

NBC News: It May Be Illegal to Vote for President Trump and the Government Should Take Action: RS
'#CNNIsGarbage': CNN Was So Bad in the Last Democratic Debate That Even Progressives Attacked It: Matt Vespa
Trump signs bill to upgrade Martin Luther King's birthplace to national historic park: Gregory Korte

The long term ramifications of SpaceX’s crew Dragon on the future of the human race: Robert Zimmerman
Friday Funny – hottest decade evah! #showyourstipes @ed_hawkins: Anthony Watts
How I Get By: A Week in the Life of an Amazon Delivery Driver: Maxwell Strachan

Larwyn’s Linx: How five different members of Joe Biden’s family all got rich through his connections

Trump Hat 2020 Keep America Great Camo MAGA Hat
How five members of Joe Biden’s family all got rich through his connections: Peter Schweizer
Beware Virginia – A Remarkable Confluence of Events…: CTH
Collins: Democrat's remark that Trump must 'prove innocence' should alarm all of us: CTH

Trump Rips Fake News CNN’s Jim Acosta for trying to disrupt Oval Office conference: Jarrett
Hulu announces Hillary Clinton documentary no one asked for: Becket Adams
Alan Dershowitz Says He Is On The Side Of The Constitution When Defending President Trump: OAN

Rep. Jeffries insisted this morning that this was an urgent need to impeachment but a month delay was still warranted. What he ignores is that, if they had waited for two months (as I encouraged in my testimony), they could have called these witnesses and complete the record.

at 7:23 AM 2 comments
Email ThisBlogThis!Share to TwitterShare to FacebookShare to Pinterest
Labels: Linkfest
Older Posts Home
Subscribe to: Posts (Atom)