Democrats have an election truther problem: Becket Adams
Biden’s Top Fundraiser Withdraws Support, Predicts Others May Do the Same: Janita Kan
‘A betrayal’: Inside the bitter rift between Pelosi and Schumer over border bill: MSN

President Trump Meets With Kim Jong-Un at Demilitarized Zone for Historic “Handshake: CTH
Is Unpredictability a Virtue in a World Leader?: Donald Elliott
Biden: ‘We Have to Have Someone Who Knows How to Corral the Rest of the World…Like We Did’: Craig Bannister

In the not-so-distant future, “synbio” could lead to global catastrophe—maybe: Rob Reid
DARPA Funds ‘Prosthetic Memory’ Chip Implants: Betty Joita
Pentagon has developed a laser that can identify subjects from afar based on their heartbeat: DailyMail

At Least Nobody Spoke Spanish: MOTUS
If the NPC Meme Didn’t Exist We’d Have To Invent It: MOTUS
Nothing: Springer's Blog

Presbyterian church features drag queen reading story to children about LGBTQ icon Harvey Milk. This is worship of man, not worship of God. When the church looks like the world, it has completely lost its way. God is very clear, we cannot serve them both. https://t.co/2iwYlJchYY

at 4:44 AM 3 comments
Email ThisBlogThis!Share to TwitterShare to FacebookShare to Pinterest
Labels: Linkfest

Ross and Spackle are on a covert diplomatic mission overseas. Due to really crappy connections courtesy of British Airways, posting will be delayed.
at 9:21 AM 6 comments
Email ThisBlogThis!Share to TwitterShare to FacebookShare to Pinterest

Larwyn's Linx: Clueless Mueller Now Has to Figure Out What’s in His Report

Trump puts the blame for two dead migrants squarely on Democrats…: Scoop
All 2020 Senate Dems Absent for Vote to Send Relief to Border: Cameron Cawthorne
Military’s mission is not enforcement: smugglers cross in front of them: Daniel Horowitz

In a world first, Facebook to give data on hate speech suspects to French courts: Reuters
Dershowitz: “Democrats Will Regret Calling Mueller to Testify”: CTH
Chicago Bar Employee in Custody After She Spits on Eric Trump: Matthew Boyle

Then why did you vote against funding to help them? pic.twitter.com/GI2GO1frFc

“I have been in office for many years, the Military is very important to me, and at no time in my professional life has the U.S. Military been as strong as it is right now.” Thank you @LindseyGrahamSC

at 8:04 AM 2 comments
Email ThisBlogThis!Share to TwitterShare to FacebookShare to Pinterest
Labels: Linkfest

Licensed to Lie, by Sidney Powell. The true story of the strong-arm, illegal, and unethical tactics used by headline-grabbing federal prosecutors in their narcissistic pursuit of power.
The Google Fascists: Jeffrey Lord
Is Google manipulating search results to prevent Trump re-election?: Carpe Diem
Our Evil Tech Overlords: You see what they want you to see: Melissa MacKenzie

Tesla 'On The Verge' of Bankruptcy: Vilas Capital: Shoshanna Delventhal

Maduro’s Ex-Spy Chief Is In Washington And He’s Spilling The Beans: Jazz Shaw
'Islamophobia' Expert: Christianity 'An Oppressive Political System Bent on Discrimination': Robert Spencer
The Myth and Fraud That There Ever Was an Arab Country or People Called ‘Palestine’: Dov Fischer

El Chapo is to be sentenced today in federal court. It's time to put his confiscated assets to work building a wall at the southern border with Mexico. Via @FoxNews https://t.co/QXz2H6Nff3

Framers never intended for impeachment to be a political weapon: Nate Madden
Mexico has deployed 15,000 troops to stop border crossings: Julio Rosas
Fact: Iran and America Have Been at War For Years: David Cortright

California: Here Be Monsters: J. Frank Bullitt
Blurring the expense of medical care: Stephen Moore
Who bought a seat at the table of the Libra Association: DailyFintech

A predictive search is supposed to predict what you're looking for based on what's trending or popular.
Call me skeptical, but I can't envision anybody asking if men can have babies or get pregnant.
But Google somehow wants us to think it so. Why? pic.twitter.com/sJcUSroAN8

What could possibly go wrong with Zuckercash™? 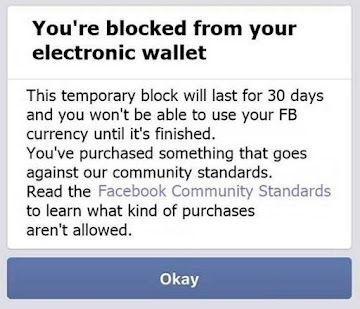 What Hillary and Obama Actually Did


It’s remarkable that the Democrats—and the corporate leftist media—don’t know the difference between Norway and Russia.

Why We Fight, by Sebastian Gorka. An inspirational reminder of American values and sacrifices that must not be lost.
One is an unequivocal part of the West, a founding member and staunch pillar of NATO.

The other is a schizophrenic nation with imperialistic tendencies run by a former KGB colonel.

These nuances are apparently lost on the likes of George Stephanopoulos and his accomplices of the FakeNews Industrial Complex.

Since President Trump’s interview with the former Clinton White House official, hundreds of column-inches and hours of television “commentary” have already been committed to the hysterical accusation that the commander-in-chief is condoning “collusion” and that the legitimacy of the 2020 elections has already been undermined.

Norway is a friend. We talk to friends.

We even talk to enemies when we must.

But Norway is an ally, bound to us in a collective defense commitment enshrined in the Washington Treaty that founded NATO. So when Donald Trump, in response to a question, floated a hypothetical scenario that he would listen to the Norwegians if they had derogatory information about a political candidate here in America, he was showing good judgment. In fact, if any reliable international partner showed a willingness to provide information that is pertinent to the health of the country, it would be a dereliction of his duty to reject that information. That’s exactly why we have a complex and secure system for intelligence-sharing with our allies, especially those in the Five Eyes community.

EcoWatch: Those Impossible Burgers Are Neither Healthier Nor More Eco-Friendly: Jazz Shaw
Walmart adds AI-powered cameras to more than 1,000 stores to reduce checkout theft: FoxBiz
This AI Uses Echolocation to Follow Your Every Move: SingularityHub

Big hat 🎩 tip to the Oregon GOP Senators! Liberals, and their media sycophants, HATE IT when you turn their tactics on them. https://t.co/UlR5LMYNzG

Why no one believes Trump's accuser: Don Surber
Laura Ingraham Understands the End Goal of Mass Migration: Jose Nino
Wonder if I’ll get banned by Twitter for this one!: First Street Journal

How We Will Stop China’s Long March to Rule Earth and Space: Edward Ring
The Suicide of France: Giulio Meotti
Releasing My North Korean Documentary Film to My Readers: Andre Vltchek

Remember Bunker Hill: Camp of the Saints
Reputation Is But A Shadow: MOTUS
SEAL who killed UBL mocks Democrat for caring about 'immigrant families' over 'homeless veterans': Ellie Bufkin

at 11:19 AM 3 comments
Email ThisBlogThis!Share to TwitterShare to FacebookShare to Pinterest
Labels: Linkfest

Gallagher still faces murder charges even after another SEAL confesses to murder: AMN
Something is terribly wrong in Maggie Hassan’s office: Becket Adams
Chaos at the NRA: Stephen Gutowski

fighting for the US Constitution

fighting for this country we love

standing up against epic corruption by those who criminalized political differences

and yet, years of @seanhannity's private texts revealed while we've seen nothing from the journalists who perpetrated a fraud pic.twitter.com/mKJczehR5x

at 9:30 AM 2 comments
Email ThisBlogThis!Share to TwitterShare to FacebookShare to Pinterest
Labels: Linkfest


This Democrat Party is a horrid party.

There is a revolution taking place. Over the years I've called it a counter-revolution to the American revolution. It's been going on for a hundred years and you're seeing its progeny right now.

The Democrat Party has always been a hateful party.

If you're an anti-semite, you can find a home in the Democrat Party.

The Democrat Party is the modern home to anti-semitism. As I said, this party has become a poison.

Biden Was More Than ‘Civil’ With Segregationists. He Was An Ally: David Harsanyi
Biden Admaker Departs Amid Candidate’s Praise of Segregationists: Haris Alic
Why Does Joe Biden(D) Incite Violence Against His Political Opponents?: Locomotive

5.8 Million Individuals Drop Off Food Stamps Under Trump: Katherine Rodriguez
If you live in these areas, your property taxes are about to soar: Greg Hinz
70,000 Illinoisans collecting state pensions have moved out, taking $2.4 billion: Marathon

Iran shoots down drone flying at high altitude; clearly a new level of weapons for Iran: Vlad Tepes
Trump stopped attacks against Iran after learning 150 people might die: Zachary Halaschak
Iran claims it refrained from shooting down US plane with passengers on board: Zachary Halaschak

Larwyn's Linx: Why Wasn’t Everyone Looking for Hillary’s Missing Emails?

Why Are There So Many Homeless in Los Angeles?: Roger L. Simon
At Dems' Event on Poverty, No One Talked About Jobs: RCP
St. Louis Blues: Aaron M. Renn

Time to Indict McCabe, Not Impeach Trump: Daniel John Sobieski
What Did Obama Know About Hezbollah’s Bomb Plot in London?: Brian Cates
FBI Appears to Have Defrauded the Court in the Manafort Case: S. Noble

GOP Sen. Josh Hawley takes aim at Big Tech's legal protection with new bill: James Rogers
President Trump: ‘Imagine What This Angry, Left-Wing Mob Would Do If They Were in Charge’: DC
Stop the press: Mark Levin's Unfreedom of the Press NYT's No. 1 for 4th week, 300000 sold: Examiner

.@BurgessOwens: “I used to be a #Democrat until I did my history and found out the misery that that party brought to my race ... slavery, #KKK, #JimCrow, killed over 40% of our black babies, 20M of them. How about [Democrats] pay for all the misery brought to my race?” | RETWEET pic.twitter.com/l07MWpO5gZ

at 5:52 AM 1 comments
Email ThisBlogThis!Share to TwitterShare to FacebookShare to Pinterest
Labels: Linkfest

UNFREEDOM OF THE PRESS A NYT #1 BESTSELLER FOR 4th WEEK IN A ROW: The New York Times Hardest Hit

Oh, and Jim Acosta's name ain't visible, is it? 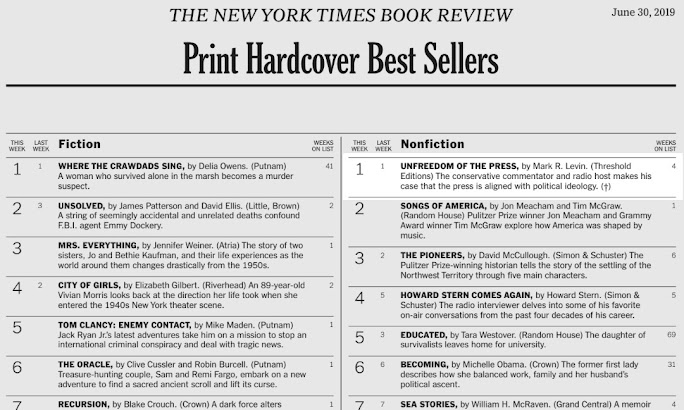 As you might have surmised, Mark Levin's analysis of our "free press" is simply outstanding. Get your copy now (or buy one for your open-minded Democrat friend). People are being moved by this book.
at 8:19 PM 1 comments
Email ThisBlogThis!Share to TwitterShare to FacebookShare to Pinterest
Labels: Books, Levin, MSM, New York Times, Obama, Trump

Unfreedom of the Press, by Mark Levin. The book that started a movement exposing our hyper-partisan media.
Trump Finds Agreement from People You Wouldn’t Expect: Raheem Kassam
Crazy Hoax: Byron L. Maduska
Do Republicans Have The Will To Win The Russia Hoax?: Thomas Farnan

All the Cyber Attack Stories from the Past Few Days Can’t Be Linked…Can They?: Organic Prepper
WordPress De-Platforms Blog That Posted Statistics About Muslims: BLP
Dallas Photojournalist Snaps Photo of Gunman From Just Feet Away: PetaPixel

Please @AOC do us all a favor and spend just a few minutes learning some actual history. 6 million Jews were exterminated in the Holocaust. You demean their memory and disgrace yourself with comments like this. https://t.co/NX5KPPb2Hl