MY NAME IS ANDREA STELTER-ACOSTA: And welcome to the ABCBSNBC Evening News!

This just in: Trump sucks.

The latest reason for Trump sucking, as revealed by our exclusive SuckTracker 2000, is that he answered a hypothetical question posed by the amazing media midget George Stephanahuffaloss with: “I’ll have to see what’s in it before I would bother to pass it on to the FBI.” 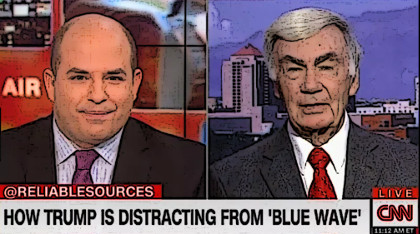 Here’s Anderson Blitzer with the latest on how the walls are closing in on Donald J. Trump.

Thanks, Andrea. This is Anderson Blitzer reporting from the White House. This just in: the walls are closing in on Donald J. Trump. Back to you, Andrea.

Alright, AB. Now, for comment, we reach to the Chairman of the House Oversight and Something Committee, Jabba the Nadler. Chairman Jabba, what say you about the walls closing in on “President” Trump?

***Burp*** That was damn ***Fart*** good chicken that Steve Cohen brought in. So when do we cut over… [listens] … oh, hey, Andrea, just working on some legislation. How are you doing?

Great, just to repeat the question ---

Hold on a second. [leans over] ***Farts sporadically for 12 seconds*** Okay what’s the question?

Chairman Jabba, are the walls closing in on Trump?

Indeed they are, honey pie. We have issued a record 8,640 subpoenas for everyone Trump has associated with since 1981. We have also held 24 Trump administration officials in contempt of Congress. So, yes, the walls are closing in.

After the break, we’ll return to the latest news on Trump’s troubles, his imminent impeachment, and how the walls are closing in on our first orange president.