Benghazi-gate: Democrats couldn't share the grief of a mom who was lied to in front of her son's casket or a grieving father who wonders why the general who could have mounted a rescue was relieved of his post. 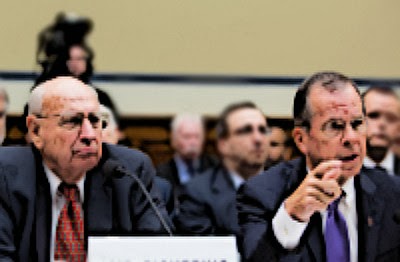 It was a shameful spectacle all around, starting with bizarre testimony by the authors of the State Department's Accountability Review Board (ARB) report and including real tears in a scandal branded as "phony" by the Obama administration and the repetition of lies agreed upon.

The scene was Thursday's hearing on the Benghazi terrorist attack before Rep. Darrell Issa's House Oversight Committee. ARB co-chair Thomas Pickering shamelessly repeated the excuse that Secretary of State Hillary Clinton was not interviewed by the board because members knew where the responsibility rested — as if an attack on a U.S. diplomatic mission and the murder of an ambassador, the first in three decades, was outside the scope of her interest or authority.

Yet Pickering and Mike Mullen, former Joint Chiefs of Staff chairman, authors of this "independent" investigation, admitted they regularly briefed Clinton and her advisers on their probe, an admission made more telling when the parents of two of the Benghazi dead said they never received the information they were promised on how and why their sons died.

Incredibly, they also explained why they didn't swear in witnesses for the ARB: "We had no reason to believe we would not get truthful testimony." Really? They had no reason to doubt the truthfulness of people who for weeks claimed a terrorist attack was really a spontaneous demonstration triggered by an old Internet video?

But the grim reality of this "phony" scandal really hit home with the testimony of Patricia Smith and Charles Woods, which apparently threatened more revealed truth than most Democrats on the Oversight panel could handle. With the exception of ranking member Elijah Cummings, D-Md., and Jackie Speier, D-Calif., 12 other Democrats on the Committee shamefully left the room and refused to listen to the testimony of Smith, mother of Sean Smith, an information management officer killed in the 9/11 Benghazi attack, or Woods, father of Navy SEAL Tyrone Woods, who was also killed.

Phony scandals don't produce body bags. Mrs. Smith testified how President Obama, Vice President Joe Biden and Secretary Clinton, among other top administration officials, approached her at the casket ceremony when her son's body was returned to the U.S.

Charles Woods, who has given similar testimony, asked a question we also have asked. Noting how he was told of a conversation by Gen. Carter Ham that assets were available to use for a rescue, but that he was not allowed to deploy those assets, Woods wondered: Why not?

As we have reported, Ham, then head of U.S. Africa Command, was relieved of his post after only a year and a half on the job. According to James S. Robbins in the Washington Times, Ham got the same emails about the terrorist attack by the al-Qaida-linked Ansar al-Sharia and immediately began organizing a rescue attempt.

Ham is said to have told the Pentagon he had a rapid response team ready, but was told to stand down. Ham then reportedly said he was going to send help anyway and was promptly relieved of his command.

Perhaps we can subpoena both Ham and Hillary and get them to do some explaining under oath. But as Mrs. Clinton might say, what difference does it make now? To Patricia Smith and Charles Woods, it matters a lot.