Security: As the usual suspects call for stricter gun control, the fact remains that a gunman with two prior gun-crime arrests entered a secure military facility with a stolen ID and found no one able to shoot back. 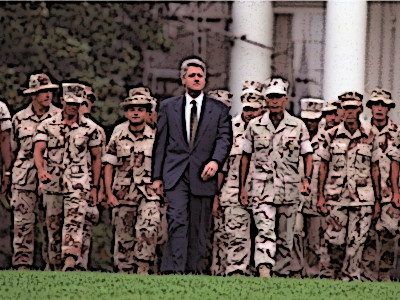 It was Fort Hood all over again. Aaron Alexis, a gunman whose prior behavioral warning signs were ignored, opens fire in an installation belonging to the most powerful military on Earth and those who protect our nation and design our weapons are not allowed to have a weapon to defend themselves.

He was more equipped than the 12 people he killed on the base who were not permitted to carry weapons on the base, thanks to former President Bill Clinton.

In 1993 the president issued orders that barred members of the military and their civilian contractors from carrying personal firearms on base. Even officers were disarmed under the law.

Almost as soon as Clinton assumed office, in March 1993 the Army imposed regulations forbidding military personnel from carrying their personal firearms and making it almost impossible for commanders to issue firearms to soldiers in the U.S. for personal protection.

That ban extends to virtually all U.S military bases and related installations.

Under the ruling enacted by the Clinton administration, there must be "a credible and specific threat against personnel" before military personnel "may be authorized to carry firearms for personal protection."

This was the reason that the Fort Hood shooter Maj. Nidal Malik Hasan was able to go on a rampage for a full 10 minutes in 2009 without being stopped.

This is why, at Fort Hood, home of the heavily armed and feared 1st Cavalry Division, a civilian policewoman from off base was the one whose marksmanship ended Hasan's terrorist rampage, to this day obscenely called "workplace violence," denying survivors and the dead medals and benefits.

The liberal reaction to the Navy Yard massacre mirrors the reaction, after Fort Hood, of Paul Helmke, president of the Brady Campaign to Prevent Gun Violence.

He opined, "This latest tragedy, at a heavily fortified army base, ought to convince more Americans to reject the argument that the solution to gun violence is to arm more people with more guns in more places." What?

On Monday night, anchor John Roberts asked Mandy Foster, the wife of one of the soldiers shot at Fort Hood, how she felt about her husband's upcoming deployment to Afghanistan. She responded: "At least he's safe there and he can fire back, right?" Safer than at the Washington Navy Yard or Fort Hood.

President Obama, on whose watch we might note military mass shootings have skyrocketed, was one of the first to link Monday's incident to gun control.

He did so by telling Americans as he began an economic speech, "We're going to be investigating thoroughly what happened, as we do so many of these shootings, sadly, that have happened, and do everything that we can to prevent them."

Everything except repealing the Clinton weapons ban at military bases and installations, calling Fort Hood an act of terror instead of workplace violence, pushing for an end to gun-free zones where only predators are armed, and fighting for the Second Amendment rights of Americans you are so eager to disarm.

When will we learn the folly of gun-free zones?

Our national policy on guns needs to be changed all right — from one of "shelter in place" to one of "go ahead, make my day."

Gee, the family that kills together stays together - and they keep on giving.
The Bent One has murdered hundreds of innocents because he disarmed the Military, but not to be outdone, his wife got the ball rolling for health care which will kill tens of thousands through inept oversight and death panels.
I suppose we could call Bill the humane one because his victims died so quickly. Hitlery on the other hand has ordained that her subjects die from disease, hunger and de-hydration.
And to think, the Democrats celebrate this.

Bill-the-Military-genius, thought it best to throw the 75th Ranger regiment and assorted Special Forces into that shit hole, to grab that food thief/war lord Muhammed Adid.

But attaching armored vehicles and tanks would look to "assertive" for that OP, according to General Clinton and the Chiefs.

18 hour wait for the U.N. assigned Paki's to get their armored shit together and roll with a relief force.

Hey, Hillary looking for something to do in 2016?