Hey, Old Media Clowns: If We're Really In a "Recovery", Why Is One-Sixth of the U.S. on Food Stamps?

You can't browse a vintage media newspaper or website without seeing the assertion that the U.S. is in "a recovery".

And food stamp usage continues to explode, the product of rampant fraud, Obamacare's destruction of full-time employment, and the fact that welfare pays better than work.

Food-stamp use grew 2.3% in June from a year earlier, with nearly one-sixth of the U.S. population receiving benefits. 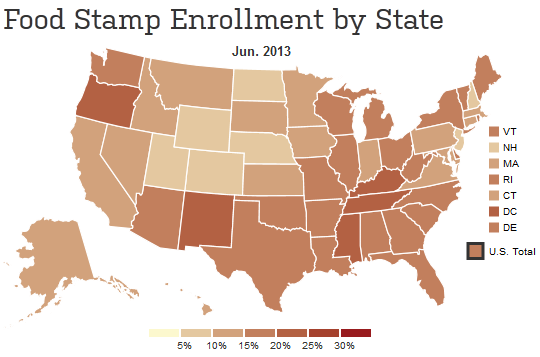 Illinois showed the largest enrollment increase from last year with a 14.7% gain, according to Agriculture Department data released Friday. Wyoming was in second place, with rolls up 11.1% since the same time last year. Utah experienced the largest annual decline in food-stamp use, dropping 11.2%, among a dozen states to post a decrease. (Enrollment also decreased in Arizona, Idaho, Maine, Michigan, Missouri, New Hampshire, North Dakota, Oregon, South Carolina, Pennsylvania and Washington.)

One of the largest social safety net programs in the United States, food stamps – formally known as the Supplemental Nutrition Assistance Program, or SNAP – expanded substantially during and after the recession, with enrollment rising about 70% from 2007 to 2011. At the same time, the government also temporarily increased benefits and allowed users in the hardest-hit areas to receive aid for longer-than-usual periods of time. The average monthly benefit was $133 last year.

Critics clamor against what they see as a disturbing rise in government dependency. But new economic research suggests the program’s expansion isn’t alarming and can, in fact, be explained by business cycles.

Yo, antique media clowns: it's called The Cloward-Piven Strategy. Look it up. That is, if you want to stop retyping press releases from the White House and doing actual reporting for a change.