"TASTES LIKE VOMIT": Michelle Obama Says Her Anti-Obesity Program is Wildly Successful, But Schools Nationwide Have Kicked It to the Curb

Yea! Three cheers for FLOTUS! Her 'healthy eating' program has saved the country from obesity!

Michelle Obama credited her anti-obesity program with bringing about a “cultural shift” in the way Americans eat.

“Make no mistake about it. We are changing the conversation in this country. We are creating a cultural shift on how we live and eat. And our efforts are having an impact on our children’s lives.”

The first lady touted the success of her Let’s Move anti-obesity program during a visit on Friday to Orr Elementary School in Washington, D.C.

Yet even CBS News reports that school districts throughout the country -- including California -- have abandoned Michelle's "healthy eating" program. 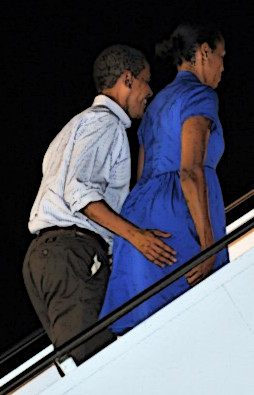 The Laguna Beach Unified School District, in Southern California, is the latest district to rebel against the federal healthy lunch program -- a cornerstone of first lady Michelle Obama's campaign against childhood obesity. The school district announced Tuesday night that it will revise its lunch menus.

The USDA (which administers the program) says growing pains are to be expected, but the complaints from school officials are getting louder; they say kids aren't eating the vegetables and low-fat choices and end up too hungry to learn. And they're saying they're losing money from throwing out all the uneaten food.

The new lunch rules, some districts say, are just unpalatable. Grumblings came from school boards in California to Illinois, Indiana and New York.

In Kentucky, one official said students thought the healthy fare "tastes like vomit."

In fact, things are going so great for Michelle's health eating program that schools in 19 states are measuring kids' BMI for obesity:

...schools in 19 states have started to conduct annual weigh-ins of students that test for their body mass index, the primary measurement used to determine if someone is overweight or obese, and then sending students home with reports – or “fat letters” – of the results.

“We look at growth charts and percentiles. And when a child is at 95 percent of their…we can look at weight for age or weight for height…that child would be considered obese,” Lauren Schmitt, a registered dietitian in California who measures the weight of hundreds of preschoolers in the San Fernando Valley, told CBS Los Angeles.

She added that out of the 900 pre-schoolers she looks at annually, roughly 200 are considered obese.

Success! Only one in four kids are obese!

Oh, and I forgot: the economy is so great a whopping one-sixth of the nation is on food stamps, and we know those are all used for the healthiest food choices imaginable.

Were they not in power, these Leftists would be employable only as comic relief.

Who makes her dresses, Omar the Tent-maker?

Hell, I want to vomit anytime I have to look at her fat ass. Pardon the language... but no other word is fitting for the 'pear'. That's body shape talk. Flat on top, huge on the bottom.

And @Reaganite Republican, I believe you are correct about the tents. Seeing Barky grab her butt going up the airplane (oops sorry. It's NOT a 'normal airplane... it's the $181,757 per hour Air Force One). Well excuuuuuse me, Barky and Mrs. Barky. Think of us when you're on your never-ending vaca. Those breaks in between are a bitch ain't they?