The Ugly Face of Tyranny: Feinstein and Other "Progressives" are Coming For Your Right To Speak Freely Online

Senator Diane Feinstein has taken up the fight for truth and liberty, just as she has done for health care and the widespread disarmament of American citizens.

This month Congess has been debating a new media shield law, which according to its authors, aims to protect journalists and bloggers from being forced to testify about their work should their sources or information come into question.

But Diane Feinstein has refused to support the bill, noting that the law would essentially grant this shield privilege to anyone who chooses to share their opinion on the internet (including those pajama sporting bloggers and news aggregators working out of their basements).

But because freedom of speech, as interpreted by Feinstein, is nothing more than a privilege granted to us by her and her ilk in Congress, she has taken steps to ensure that only those journalists sanctioned by the government will be protected by the new shield laws. 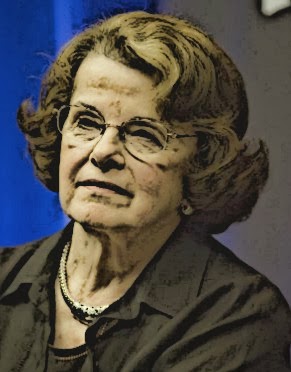 The final hurdle for the Judiciary Committee was defining who is a journalist in the digital era.

Sen. Dianne Feinstein (D-Calif.) insisted on limiting the legal protection to “real reporters” and not, she said, a 17-year-old with his own website.

“I can’t support it if everyone who has a blog has a special privilege … or if Edward Snowden were to sit down and write this stuff, he would have a privilege. I’m not going to go there,” she said.

Feinstein introduced an amendment that defines a “covered journalist” as someone who gathers and reports news for “an entity or service that disseminates news and information.”

The definition includes freelancers, part-timers and student journalists, and it permits a judge to go further and extend the protections to any “legitimate news-gathering activities.”

As noted by Dave Hodges at The Common Sense Show, this very report, for example, is being published by an unlicensed and unofficial news-related web site, and therefore, would not meet the stringent guidelines set forth by Feinstein’s new amendment.

In the definition introduced in Feinstein’s amendment, somebody writing for a small town paper with a circulation of 30 would receive First Amendment protections, but quality news people such as Steve Quayle, John Stadtmiller, Jeff Rense, Doug Hagmann, Stan Deyo, Michael Edwards, Alex Jones, George Noory and Matt Drudge would not be considered journalists and therefore, the First Amendment would not apply to this group of aforementioned newsmen.

With the passage of this amendment, our sources would not be privileged and many of our sources would dry up. But Wolf Blitzer and Anderson Cooper can take bribes from the CIA to not cover certain stories, yet Feinstein thinks they deserve protection as authentic journalists.

And for those out there who don’t have a blog or web site where they share news, videos, information and criticisms of government, consider that the Feinstein amendment doesn’t refer to just web sites. It covers all internet venues. It’s not about how the information gets out there, it’s about the individual or organization disseminating it.

So, should you choose to share an opinion in the comments section on this web site or post on your Facebook or Twitter page, you would, just as this author, fall outside of the Constitutional protections of the First Amendment.

Your comments, if critical of government or big business interests, would not be protected by shield laws. You see, you’re not capable of forming an opinion or citing appropriate references for your argument. To do that, you must be licensed by the State or approved by a court.

But the government can’t do that, right?

They’ve already tried and failed on their first attempt, but what if this law would have passed?!

John McCain previously introduced a bill that would fine bloggers up to $300,000 for “offensive statements, photos and videos posted by visitors on comment boards”.

If the bill would have been successful, this legislation would have marked the end for previously unrestrained opinions. Hiding behind the pretense of protecting our children, McCain’s legislation was referred to as the “Stop the Online Exploitation of Our Children Act.” The legislation demands that a Stalinist-type army of informants and spies will browse various websites looking for inappropriate internet material which might pose a threat to children. McCain’s internet army would then pass the information on to the relevant police authorities and subsequent bloggers could be fined $300,000 or have faced jail time.

Anyone who has participated in online comment boards is keenly aware that they are very difficult to moderate. Some articles and news events may receive thousands of comments. Yet, one oversight by the moderator, one day off from the internet, could spell doom for the financial future of a blogger. What citizen can afford to take that chance? Hence, your right to self-expression has been sacrificed. Your first amendment right to self-expression is technically still intact. However, the personal affordability to exercise free speech would have been severely jeopardized

While McCain’s bill died a horrible death, and rightly so, Feinstein’s amendment essentially aims to do the same thing, though monetary fines for journalistic transgressions are as of yet undefined.

You see, as is always the case with our Congressional benefactors, the devil is in the details.

Take, for example, health care. For years the establishment pushed for universal, affordable health care for all Americans. The efforts really started back in the 1990′s with the failed Hillary-care movement. But it didn’t really die. In fact, calls for free health care got louder and louder, and in 2008 they came to a head with the election of Barack Obama, who promised just that for Americans. It took nearly 20 years, but they did it, and millions of Americans thought they had won a victory.

But, lo and behold, after legislation to cheapen and improve our health care was passed, we began to see the fine print come to fruition. And all those folks who vehemently supported an affordable care option are now wondering what the hell happened. As was revealed in recent days, costs aren’t going down. Just the opposite, in fact. For many Americans who rallied behind the President those costs are going to double, triple, or quadruple!

Now they are pushing forward with new restrictions on speech. And just as no one thought they’d actually be paying more for health care after the legislation was passed, no one really believes the government would go so far as to eliminate our ability to open discourse.

As with Obamacare, it’s all in the details – the fine print and the complementary regulations to follow.

The Patient Protection and Affordable Care Act is government double-speak for, “you’re about to get screwed.”

Guess what Feinstein’s version of the Media Shield Law is going to do.

Disclosure: This report has been published by an unlicensed and unregistered journalist-blogger-commentator. It has not been sanctioned by the United States government. Under new legislation pending in Congress, this report, as well as those who comment and share it online may be determined by a future court to be criminalistic or terroristic in nature and subject to penalties under U.S. Law.

What a very informative post. Thanks for Sharing This Article!
Want more Pop Culture? Log onto WWW.POPCULTUREZ.COM!

This is one evil, corrupt woman.
That is not hyperbole, nor an understatement.

This sick bitch needs to be sat on, and hard.

Well if the come to arrest me for prosecution, they had better bring SWAT, I will not go willingly. If they aim to start, they can start at my front door, there is no limitation on free speech, as far as feindstean, she can kiss my azz.........posted......

HEALTHCARE, GOVERNMENT SHUTDOWN OT: I just moved from Texas back to New York. My insurance company said that it doesn't offer policies in New York, so it would cancel my policy in 90 days. Not only that, but my premiums for those 90 days in New York would be triple!

I'm very mad at government right now. When I registered to vote in NY again, I dropped the "Republican" and decided to become an independent.

TEXAS MEMORY: Can you remember back to when the Republican establishment (everyone but Mark Levin) wanted to clear the way for David Dewhurst to become a Texas senator, replacing Kay Bailey Hutchison? Now do people realize what one effective non-zombie legislator can do?

These tyrants are afraid of us.

They are afraid of what we will do to them for what they are doing to us.

It is why they they call the AR15 rifle an "assault weapon".

Because they are afraid it will be used to assault them for what they have done to this great Republic.

It is why the are attempting to make peaceful redress impossible.

They are afraid because the idea of truth and reason reveals their illegitimacy.

They are afraid of people speaking freely because they only have power until they do not.

They only have power as long as the fiction of their legitimacy is hidden behind the existing appearance of legitimacy.

They are afraid.
Very afraid.
Afraid we will know the truth of them.

I think it is too late for them.

I think they have made revolution to their illegitimacy possible.

It is a cascade preference of Liberty.

And no tyrant, no power, no law, can stop this.

Because the simple truth is once people stop believing in the legitimacy of the power and monopoly of force of the tyrants and their system of rule over us, they simply have no power any longer.

They only posses the means to enforce their will through threat of violence.

That is why they are tyrants.

It is why they are afraid.

Afraid people are beginning to believe.

Believe the only power in this land, the only legitimacy of the sovereign, has always resided in us.

What is even grander than this, what is so wonderful, this great nation of freemen has in it's grasp the ability and wherewithal to become greater than any can imagine.

That ideal of the shining light on the hill is true.

When you believe you become free.

And that is the freest speech, the most powerful assault weapon of Liberty there is.

Oh yes, they are afraid.

They should be terrified of us.

But they do not know what true power is, how truly powerful we the people are.

I guess Thomas Paine is out then,
pamphleteer = blogger.