Sorry, that's cruel, I know. But when these despicable hacks use their power and the instrumentalities of government to target political opposition, well, it's clear they are not real Americans. In fact, they despise the American form of government. They loathe free speech. And, most of all, they will use any scheme, no matter how unlawful, to retain their white-knuckled grip on power.

Congress's investigation into the IRS targeting of conservatives has been continuing out of the Syria headlines... [and the latest revelations] raise doubts about IRS claims that the targeting wasn't politically motivated and that low-level employees in Cincinnati masterminded the operation. 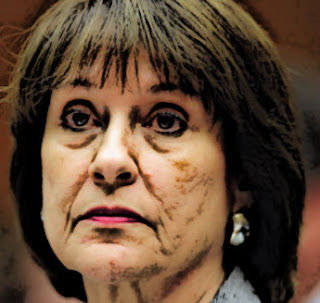 In a February 2011 email, Ms. Lerner advised her staff—including then Exempt Organizations Technical Manager Michael Seto and then Rulings and Agreements director Holly Paz—that a Tea Party matter is "very dangerous," and is something "Counsel and [Lerner adviser] Judy Kindell need to be in on." Ms. Lerner adds, "Cincy should probably NOT have these cases."

...Earlier this summer, IRS lawyer Carter Hull, who oversaw the review of many Tea Party cases and questionnaires, testified that his oversight began in April 2010. Tea party cases under review are "being supervised by Chip Hull at each step," Ms. Paz wrote to Ms. Lerner in a February 2011 email. "He reviews info from TPs, correspondence to TPs etc. No decisions are going out of Cincy until we go all the way through the process with the c3 and c4 cases here." TP stands for Tea Party, and she means 501(c)(3) and 501(c)(4) nonprofit groups.

The emails also put the targeting in the context of the media and Congressional drumbeat over the impact of conservative campaign spending on the 2012 elections. On July 10, 2012 then Lerner-adviser Sharon Light emailed Ms. Lerner a National Public Radio story on how outside money was making it hard for Democrats to hold their Senate majority.

The Democratic Senatorial Campaign Committee had complained to the Federal Election Commission that conservative groups like Crossroads GPS and Americans for Prosperity should be treated as political committees, rather than 501(c)(4)s, which are tax-exempt social welfare groups that do not have to disclose their donors.

"Perhaps the FEC will save the day," Ms. Lerner wrote back later that morning.

That response suggests Ms. Lerner's political leanings, and it also raises questions about Ms. Lerner's intentions in a separate email exchange she had when an FEC investigator inquired about the status of the conservative group the American Future Fund. The FEC and IRS don't have the authority to share that information under section 6103 of the Internal Revenue Code...

Ms. Lerner famously invoked her right against self-incrimination rather than testify under oath to Congress. The House Oversight and Government Reform Committee reported this summer that its investigation had found Ms. Lerner had sent official IRS documents to her personal email account, and many questions remain unanswered. Democrats want to pretend the IRS scandal is over, but Ms. Lerner's role deserves much more exposure.

Lerner is a disgrace. If we had effective leaders in the House, she'd be serving time in Leavenworth, knitting sweaters for "Big Wanda".