CNBC offers a reality check for drones, progressives and other miscreants: "prepare for a new American revolution"

I don't know who this Peter J. Tanous is, but I commend him:

...I believe that one of the most important reasons the Fed is determined to keep interest rates low is one that is rarely talked about, and which comprises a dark economic foreboding that should frighten us all.

Let me start with a question: How would you feel if you knew that almost all of the money you pay in personal income tax went to pay just one bill, the interest on the debt? Chances are, you and millions of Americans would find that completely unacceptable and indeed they should. 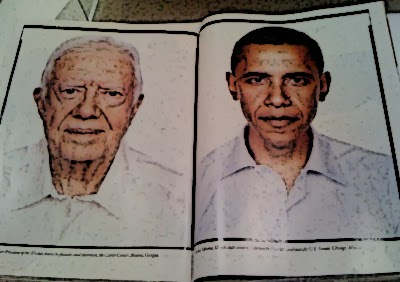 But that is where we may be heading.

Thanks to the Fed, the interest rate paid on our national debt is at an historic low of 2.4 percent, according to the Congressional Budget Office.

Given the U.S.'s huge accumulated deficit, this low interest rate is important to keep debt servicing costs down.

That rate is 5.7 percent, not extravagantly high at all by historic standards... [But if] we were to pay an average interest rate on our debt of 5.7 percent, rather than the 2.4 percent we pay today, in 2020 our debt service cost will be about $930 billion.

Now compare that to the amount the Internal Revenue Service collects from us in personal income taxes... In 2012, that amount was $1.1 trillion, meaning that if interest rates went back to a more normal level of, say, 5.7 percent, 85 percent of all personal income taxes collected would go to servicing the debt. No wonder the Fed is worried.

Some economists will also suggest that interest rates may go much higher than 5.7 percent largely as a result of the massive QE exercise of printing money at an unprecedented rate. We just don't know what the effect of all this will be but many economists warn that it can only result in inflation down the road.

As of today, interest rates are rising, and if this is a turning point, it is a major one... Rates in the U.S. peaked in 1980 (remember the 14 percent Treasury bonds?) so if we are at the point of reversing a 33-year downward trend, who wants to predict how this will affect the economy?

One thing is clear: Based on CBO projections, if interest rates just rise to their 20-year average, we will have an untenable, unacceptable interest rate bill whose beneficiaries are China, Japan, and others who own our bonds.

And if Americans find out that the lion's share of their income tax payments are going to service the debt, prepare for a new American revolution.

There should be a revolution and the sooner the better. Waiting just gives
the communists the high ground.
This debt is owed to a Fed Res that
should have never been invented, Congress is supposed to coin money by the constitution, not a cartel of private banks that print money out of thin air without backing. The sins go on and on. Back to the communists, their goal is to make everybody equally poor with the help of the Fed Res.

That is why they will never be able to stop QE. They are creating an artificial demand for treasuries. When they stop- nobody is going to put up their principal to receive 2.8% interest when true inflation is 6%.

It's game over. It's just a matter of when. I've been saying that for 5 years.

Been making this point all along. This is a snippet from a March article (http://goo.gl/26BsO)

'...At the same time government borrowing spikes higher with treasury debt outstanding now at a point where the country cannot afford to pay for that debt and needs to borrow more money simply to service the interest due bondholders.

Bondholders that to a large extent are actually comprised our federal government itself!

Now imagine for a second the impact on federal spending were yields ever to revert to historically "normal" rates. Therein lies the Fed Chairman's true quandary...'