OH, MY: Washington Post Approvingly Describes the Possible Impeachment of the President

The House Judiciary Committee took the momentous step last night of recommending that the president of the United States be impeached and removed from office... The first such impeachment recommendation in more than a century, it charges President Nixon with unlawful activities that formed a "course of conduct or plan" to obstruct the investigation of the Watergate break-in and to cover up other unlawful activities...

...[Some] are most concerned about allegations that Mr. Nixon misused such sensitive agencies as the Internal Revenue Service and the Central Intelligence Agency for political purposes.

Others are most concerned about Mr. Nixon's defiance of committee subpoenas, which is now included in Article II as a contempt of Congress count, but may be broken out into a separate article...

Substitute Benghazi for Watergate break-in and NSA for CIA and the story could have been written yesterday.

As for abuse of the Internal Revenue Service for political ends, it is now exceedingly clear that the White House had its hand in targeting Tea Party and conservative groups: 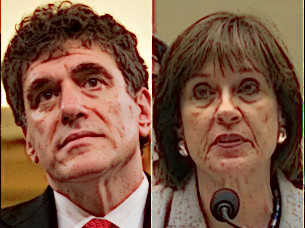 The 2011 date has one interesting parallel. Two years ago (almost to the day), the White House rolled out its own version of a lèse-majesté intimidation mechanism — “Attack Watch.” That didn’t last long in the sunlight, after widespread criticism and derision forced the White House to shelve it, although the Obama campaign tried to bring it back in February 2012 as the “Truth Team.”

So, did the IRS just feel inspired by Attack Watch, or did the White House just transfer the effort? The date on the IRS document is November 16, 2011, well after Attack Watch became more or less moribund in the public eye.

As Ed Morrissey concludes his analysis:

When the IRS starts targeting political dissent for scrutiny, they have stopped being a revenue collector and have become instead a political enforcer. That’s dangerous for all Americans, and Congress needs to demand and enforce immediate reform in the IRS. They also need to find out who ordered the targeting, regardless of how high up it goes.

This is yet another reason to defund Obamacare. We need answers. We need reform. And need an accountable IRS that can be trusted to handle Americans' health care data without using it for political purposes.

Furthermore, it is now painfully clear that IRS officials -- including Lois Lerner and Steven Miller -- lied to Congress, blatantly and repeatedly, when questioned about these partisan activities.

The hypocrisy of the Democrats knows no bounds. When they run our car into the ditch they'll blame the people in the back seat.

How do you impeach the Speaker of the House? The impeachment of the President will never happen as long as Boehner, McConnell have the gavel.