You Risk Touching Off World War III, Mr. President -- And For What?


Syria: As a Chinese warship joins Russian ships in the Mediterranean, we should remember a cruise missile attack on an Israeli warship. President Obama should understand that Syria and Hezbollah have missiles, too. 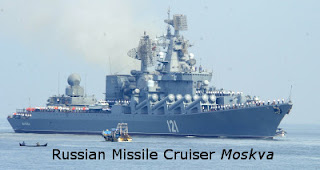 As the Obama administration continues to deploy its comical weapons, with Secretary of State John Kerry promising America any attack on Syria will be "unbelievably small," a Chinese warship deploys off the Syrian coast, joining its Russian counterparts in what used to be an "American lake," the Mediterranean Sea.

The People's Liberation Army has dispatched the amphibious dock landing ship Jinggangshan, a move that follows the announcement that Russia is sending three more ships — two destroyers and the missile cruiser Moskva — to the eastern Mediterranean to bolster forces that already include three other warships dispatched over the last two weeks.

All are a pointed reminder that we are not the only player that has pieces on the board.

Launched in 2011, the 19,000-metric-ton Jinggangshan is a 689-foot-long warship that can carry 1,000 soldiers, helicopters, armored fighting vehicles, boats and landing craft, according to a report in the China Daily.

China is reportedly worried that a Syrian strike and its aftermath could send oil prices skyrocketing, which would be bad news for the Chinese economy.

Russia has a naval base at the Syrian port of Tartus and is a major arms supplier to Syria. Russia is sending its large landing ship Nikolai Filchenkov loaded with "special cargo" towards the Syrian coast, the state news agency Interfax quoted a navy source as saying Friday.

Could that "special cargo" be parts for completing its high-end, Russian-supplied S-300 air defense system?

Earlier last Wednesday Russian President Vladimir Putin confirmed to Associated Press that Moscow supplied Syria with components for the state-of-the-art system but that the shipment was not completed: A cruise missile strike might assure its completion.

From Syria, P-800 Yakhont anti-ship missiles can cover much of the eastern Mediterranean and can even reach air bases in Cyprus. If the U.S. Navy is not very careful to stay out of range, analyst Michael Snyder observes, we could easily see footage of destroyed U.S. naval vessels sinking into the Mediterranean on the evening news.

And once the American people see such footage, it will be impossible to stop a full-blown war between the U.S. and Syria and its allies, such as Iran and Hezbollah.

In June 2006, as Hezbollah and Israel fought a brief war, an Israeli vessel, a Saar 5-class missile ship, was struck by a Chinese CS-802 anti-ship missile launched by Hezbollah in Lebanon with the assistance of Iranian Republican Guards.

If President Obama thinks he can launch a few Tomahawks in an "unbelievably small" strike and then head off for a few rounds of golf, he may be sadly mistaken.

Hillary Clinton once defended the proposition that Bashar Assad was a "reformer." John Kerry once casually dined with the man he now likens to Hitler, calling him "generous." President Obama returned a U.S. ambassador to Syria after President Bush had pulled one out for Syria's role in the assassination of former Lebanese Prime Minister Rafik Hariri.

An "unbelievably small" strike might not restore our credibility, but it could start our Nobel Peace Prize winner's next war.

Hey Barry you asshat, this is what it means to get spanked, and you were the one to humiliate this Country before the world with your foolish rhetoric, juvenile antics, and specious policies. These people play for keeps and you have opened the door for them to pee on your head and the thing is, you are licking your lips, and on 9/11 at that. We are not amused, you need a different job, like, sweeping a federal prison.

While all this is going on many of our soldiers receiving deployment orders to Egypt and SYRIA!!!!

Did McCain not say that 'boots on the ground in Syria' will end in impeachment??

Why are we not being told by the current lying sack of shit Obama about sending our soldiers into these hell holes only to get them killed?
We need answers!