Let's say you're a chemist out to exact revenge on a gang of ruthless Nazi drug dealers who stole $70 million from you. You're dying of lung cancer, so the personal risk to you of carrying out an attack on their headquarters is virtually nil.

So here are your two choices for taking out the Nazis:

OPTION 1 - WHAT ACTUALLY OCCURRED DURING THE FINALE

OPTION 2 - WHAT WOULD HAVE REALLY HAPPENED 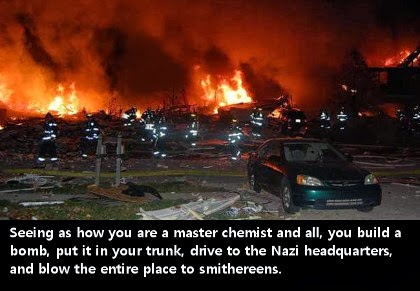 at 8:55 PM
Email ThisBlogThis!Share to TwitterShare to FacebookShare to Pinterest
Labels: Hollywood, Water-cooler

And now every wronged meth lab operator, on his last legs, who was going to build an insanely complicated motorized machine gun mount in the trunk of his car, is going to have his car trunk inspected, before entry into the Nazi meth lab hiding in plain sight along the highway. Sorry about that!

His intention is to free one person(jesse) and a bomb fails in reaching that goal.

His mission is not to free Jesse, because at the time he buys the gun, builds the robot, makes his plan, etc. he has no idea that Jesse is being held captive. He actually believes that Jesse is partnered with the Nazis.