Democrats: Military never told to "stand down" during Benghazi attacks, they were just ordered to "hold in place"

Bradley Klapper of ABC News (if that is his real name) is busy doing what reporters for ABC News do best: protect guilty Democrats:

House Democrats concluded Thursday the U.S. military wasn't ordered to "stand down" during last year's attack on a diplomatic post in Benghazi, Libya, rejecting Republican claims the Obama administration held back military assets while Ambassador Chris Stevens and three other Americans were killed... Democrats called accusations of a stand-down order during the attack "unfounded."

Let me reiterate: Democrats insist the U.S. military wasn't ordered to "stand down" as a U.S. consulate was attacked by terrorists and America's best and bravest were bleeding, fighting and dying.

Back in Realityville, the actual testimony went like this: 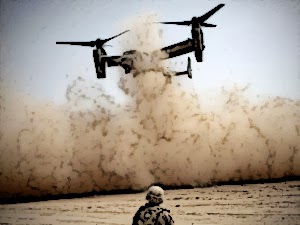 Testifying before the House Oversight and Government Reform Committee, Admiral Mike Mullen said that the direction given to Special Operations Command Africa commander Lt. Col Gibson was to "hold in place" on the night of the attacks.

Gibson is the boss of Gregory Hicks, the former deputy chief of mission in Libya who had testified that a "stand down" order was given to Special Forces who wanted to help Americans who were under assault in Libya.

So if you're Bradley Klapper of ABC News, ordering Special Ops to "hold in place" isn't the same as ordering them to "stand down."

It has been a while since we wore a uniform, but the command equivalent to "stand down" in the 80's and 90's was "Hurry up and wait."

Bradley Klapper of ABC News just did what the mainstream media always does and that is to put a little "spin" on the news. While some may consider that to be deception (and it is), they see it as doing their civic duty to protect or promote their preferred political agenda.
If the Media ever hopes to regain any credibility whatsoever as the "Forth Estate", it needs to expunge all the political activists from their ranks to achieve a goal of straight and unbiased news reporting. Let's put opinion back on the editorial pages clearly labeled as such.

Here we go again - what is the definition of "IS"?

Mullen is a disgrace to his uniform.

If the Republicans were up to the task of communications at ALL, they would have gone out and done a coordinated message where they all stood up in front of the cameras and simply said:

"We admit. We made a mistake when we said the military was told to stand down. They were in fact told to hold in place. The American public needs to judge if our Democratic colleagues are LIARS."

There's no way that entire statement could be selectively edited; with the word liards, there's no way it would not be covered.