Jamie Condliffe at Gizmodo passes along this way-cool illustration of NFL passes by Kirk Goldsberry: 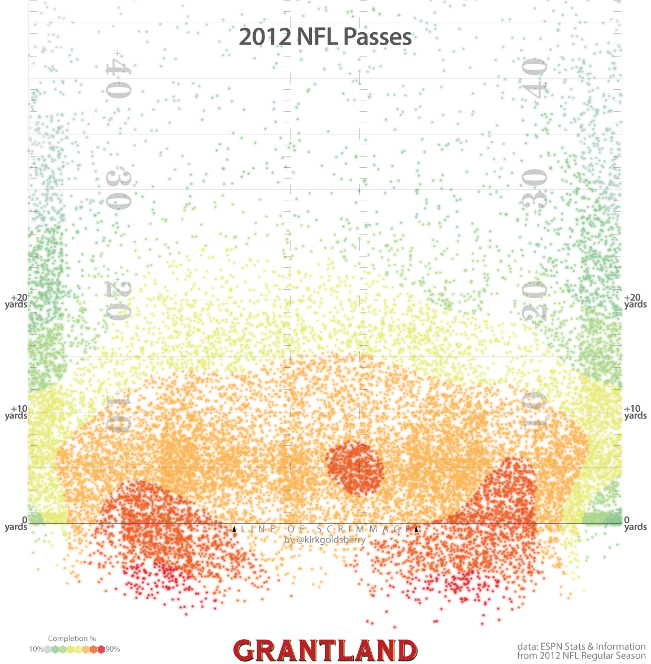 It’s very rare for an NFL quarterback to complete a pass in which the intended receiver is standing more than 45 yards from the line of scrimmage. In fact, NFL quarterbacks only attempted 175 such throws during the entire regular season last year, and only 48 resulted in completions. Joe Flacco was responsible for six of them.

Until recently, this kind of factoid was hard to uncover, but like every other sport, football’s analytics are evolving quickly. Thanks to new forms of data and emerging kinds of analyses, teams, media, and fans are gaining new insights into on-field performances. I have been exploring one such data set, a giant collection of highly detailed passing data created and maintained by ESPN’s Stats & Information group...

...During the 2012 regular season, NFL quarterbacks attempted more than 19,000 passes and completed more than 11,500; the chart above shows the location of nearly every pass. Dots are placed in spots nearby the receiver or the intended receiver. In the cases of out-of-bounds throwaways, those dots are placed at the sideline near where the ball went out of bounds. The color of the dot corresponds to the league’s overall completion percentage in that zone...

If you're a football fan, check out all the graphs. The level of detail will blow your mind and -- not that you need it -- help you kick butt in Fantasy Football.

at 9:36 PM
Email ThisBlogThis!Share to TwitterShare to FacebookShare to Pinterest
Labels: Sports

Grantland has some of the best writing on the Web. Even the stuff I wouldn't normally care about is written about in a way that makes me want to finish the article.