It just keeps getting better and better, don't it?

President Obama waived a provision of federal law designed to prevent the supply of arms to terrorist groups to clear the way for the U.S. to provide military assistance to "vetted" opposition groups fighting Syrian dictator Bashar Assad. 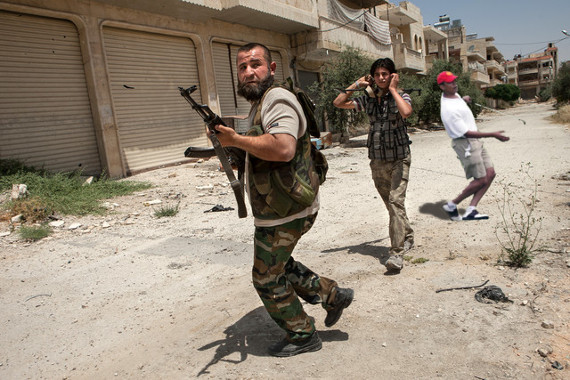 Some elements of the Syrian opposition are associated with radical Islamic terrorist groups, including al Qaeda, which was responsible for the Sept. 11 attacks in New York, Washington, D.C., and Shanksville, Pa., in 2001. Assad's regime is backed by Iran and Hezbollah.

The president, citing his authority under the Arms Export Control Act, announced today that he would "waive the prohibitions in sections 40 and 40A of the AECA related to such a transaction."

Really? This is the same fella who thinks Americans aren't responsible enough to own firearms?

This is going a ways back, but y'all remember the incessant shrieks of the anti-Reagan kooks regarding Iran-Contra?

Cue the explosion of the Hypocrisy-meter in the background.

So living in Canada, I can't order a new stock for my 10-22 from the US due to export restrictions, yet we're totally cool with sending proverbial Stingers to Islamists in Syria? WTF?

Our so-called president is passive aggressive---he'll show them.

For crying out loud, at what point does the house use their Constitutional powers and shut this train wreck down?

Another law our dictator doesn't feel the need to follow...