And we still can't find out what the President what was doing for nine hours as Americans fought, bled and died. 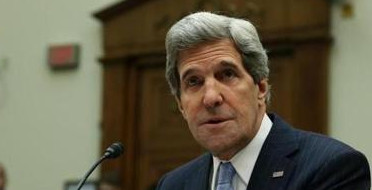 JOHN KERRY, SECRETARY OF STATE: We're talking about people being killed by gas and you want to go talk about Benghazi.

SECRETARY KERRY: We don't deserve to drag this into yet another Benghazi discussion when the real issue here is whether or not the Congress is going to stand up for international norms.

STEPHANOPOULOS: One year later as you can see, the attack on the U.S. Consulate in Benghazi is still a political football. But for the Americans there on the ground it was a story of heartbreak and the struggle to survive. Greg Hicks was the Diplomat in Charge that night. The only officer who has spoken out about that harrowing night. This dramatic account is an ABC News exclusive.

GREGORY HICKS, FORMER DEPUTY CHIEF OF MISSION IN LIBYA: I've been perplexed and frustrated with the way this has all played out. Because to me this is a simple story. Ambassador Stevens went to Benghazi to do his job. To what he knew Secretary Clinton wanted him to do. And he was attacked while he was there.

And the American staff in Benghazi and in Tripoli responded as we've been trained to do, in an amazing way, to save the lives of our people who were in Benghazi. Unfortunately we lost four people in the line of duty.

STEPHANOPOULOS: Let's take a look back at the events of that night. You're home in Tripoli--

STEPHANOPOULOS: That evening at around what, 9:45?

HICKS: It's at 9:45 Tripoli time, right, 3:45 Washington time. Our regional security officer comes running into the house where I was and yells, Greg! Greg! The consulate's under attack! And I immediately look at my telephone and I see a missed call. I call back on that number, I get the Ambassador.

And the Ambassador says Greg we're under attack.

HICKS: Chris Stevens. And I say, OK and the line is cut.

HICKS: And that's all.

STEPHANOPOULOS: We are under attack.

HICKS: We knew that.

STEPHANOPOULOS: You were also worried about the overall security situation and the amount of protection both the Embassy and the Consulate had.

STEPHANOPOULOS: And the Ambassador had been concerned about that?

HICKS: He had been concerned. He had sent in a cable in July requesting that our security personnel situation not change.

STEPHANOPOULOS: You had a special security team in place.

STEPHANOPOULOS: Then it was reassigned.

STEPHANOPOULOS: On the night of the attack, there were five diplomatic security agents with Ambassador Stevens and Sean Smith. There are at least 20 hostile attackers in the compound.

STEPHANOPOULOS: Months earlier the State Department had forged an agreement that in the event of an attack on the vulnerable Benghazi Mission, Security personnel would response from a nearby facility called The Annex, run by the CIA.

I know that you can't say so, but we know it was a CIA facility, and we know that the CIA facility was getting protection and more security than the diplomatic facility.

HICKS: The numbers are clear about twice as many in terms of trained security providers.

STEPHANOPOULOS: What did you tell Washington?

HICKS: I called Washington right after I talked to the Annex Chief and I told them that the consulate was under attack. That the--

STEPHANOPOULOS: You used the word attack?

HICKS: I did use the word attack. That there were at least 20 armed intruders in the compound and that help was on the way from the Annex.

STEPHANOPOULOS: Had you heard anything earlier in the day about any kind of protest or were you worried at all because of these reports of this video?

HICKS: No it was a non-event, the video, in Libya. And we had heard nothing about protests. The building had been set on fire by the attackers and our Diplomatic Security Agents there were heavily outnumbered.

STEPHANOPOULOS: About an hour after the attack began, the heavily armed CIA Team arrives at the mission.

HICKS: They began trying to find the Ambassador and Sean Smith who were unable to get out of the burning building. After tremendous efforts and exposing themselves to serious harm, they did find Sean and pulled him out. Unfortunately he was already dead.

STEPHANOPOULOS: So while all this is happening, what are you saying to Washington?

HICKS: I'm reporting it back to Washington every 15 or 20 minutes.

HICKS: State Department Operations Center. Exactly. By this time there's a second wave of attackers and looters coming to the Compound. Many, many poor people than--

HICKS: Yeah dozens. Perhaps hundreds. There's no way that 10 or 11 guys who were there can hold that off. So the decision is made to evacuate. They have to ram their way out of the compound. They are immediately brought under fire including heavy machine gun fire.

STEPHANOPOULOS: The entire group now heads back to the Annex but they have not found Ambassador Stevens.

HICKS: When they get back to the Annex they come under attack there.

STEPHANOPOULOS: So at this point, this is ongoing battle. Did you ask for reinforcements?

HICKS: I had already spoken to the defense attache. I asked what help is coming? And he said there's some fighters in Aviano but it's going to be 2 or 3 hours before they could make an appearance. It was clear it was going to be a long time before any help came. So I made sure that people knew that they were going to have to hold out for as long as they could.

STEPHANOPOULOS: As the battle aged at the CIA Annex, a crowd overruns the now abandoned Mission. Some Libyans locate Ambassador Stevens, clinging to life, and rush him to a local hospital.

Meantime a team of reinforcements from Tripoli, military and CIA security has arrived at the Benghazi airport.

HICKS: About 3am, 9pm Washington, they get the call from the Prime Minister than Ambassador Stevens is dead.

STEPHANOPOULOS: What did he tell you?

HICKS: He just says, I'm very sorry Greg to tell you this, but our friend Chris has passed on. I think those were his words. There was deep remorse in his voice when he said it.

HICKS: For me it, I think it's the saddest moment in my career honestly.

STEPHANOPOULOS: With the news of Stevens' death, the security team from Tripoli heads to the Annex.

HICKS: And soon after they get there the attack on the Annex is renewed. And then the mortars come in. Those are the rounds that killed Ty and Glen.

STEPHANOPOULOS: Since this has all happened we've seen all of the top Pentagon officials at the time, all the top Military officials said there was just no way to respond in time. Military assets could not get there.

HICKS: I don't know exactly what was available. I still don't quite understand why they couldn't fly aircraft over to Benghazi. When I was a kid I grew up watching Western movies. And you know the Calvary always came. I just thought that they would come.

STEPHANOPOULOS: You've had, you know, quite a journey yourself in this last year. Deciding to speak to Congress.

STEPHANOPOULOS: Back in May. Since then it appears you've been in something of career limbo inside the State Department.

STEPHANOPOULOS: State Department this was an assignment you requested, you're getting the same pay as before. But do you feel you're being punished for speaking out?

STEPHANOPOULOS: Does the State Department know you're speaking out now?

HICKS: No. They don't know I'm here with you.

STEPHANOPOULOS: Then why talk?

HICKS: Because the American people need to have the story. And Ambassador Chris Stevens, Sean Smith, Ty Woods and Glen Dohery's names are names that should be remembered by every American for the sacrifice that they made.

STEPHANOPOULOS: Could those four American heroes have been saved?

HICKS: Sadly, I think that Ambassador Stephens and Sean Smith maybe not. Ty and Glen of course were killed in the mortar attack that took place eight hours after the initial attack. It's possible they could have been saved, I think.

STEPHANOPOULOS: And what's the best way we can honor the memory of the four diplomats and security professionals who lost their lives that night?

HICKS: We can't forget them. And we need to make sure that those people who are going out into the world on our behalf have the tools that they need and the resources they need to do the job that they've been asked to do for the people of the United States.

STEPHANOPOULOS: Greg Hicks right there. In response to his contention that he's been punished, the State Department has sent us this statement which reads in part, "The State Department has not punished Mr. Hicks in any way. We appreciate his exemplary service on the evening of September 11th. His departure from Libya was entirely unrelated to any statements he may have made relating to the attack in Benghazi, and we are working with him on his next permanent assignment."

Why do I get the feeling his "next permanent assignment" will involve a New York stadium and lots of concrete?

The last time I checked, there is no statute of limitations on murder.