Captured to the best of my ability, verbatim, as I was driven to the airport


You see this? [Taps device on windshield] 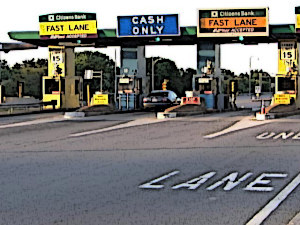 This is a Fast-Pass. People can get one for free here, and they still don't. Instead they fumble with cash, tie up traffic.

You know even if I have a one-way fare, drop you off at the airport and come back empty, I still pay five backs. There's an airport fee, a tunnel fee, whatever.

It's like $8.50 if I have a fare. They always get you coming and going in this state.

You shoulda seen a few years ago, the scandal they uncovered with the toll collectors. A lot of the tolls were still paid in cash then.

So they arrested maybe 20 toll collectors. Check this out: they were pocketing hundreds of dollars every hour.

Guess what, the fix musta been in, 'cause they got charged with misdeameanors. They said, oh, he only stole $30 or 40 bucks. No one ever heard what happened to most of 'em. Probably retired now with a full pension.

Speaking of pensions: you should see what the state troopers are doing here. Let's say you're a state trooper, you pull down $88 grand a year. Your pension is based on your top three earning years, so they'll make sure to get plenty of overtime.

Cops got an easy way to make overtime here. We're the only state in the union that requires every road construction site, no matter how small, got a cop present. Now I see lotsa sites have two cops. Guess what, with two cops, union rules say you gotta have a "site manager", so there's three cops. All that for a piece of road that just got dug up last year and they dig it up again.

I see it over and over again in downtown Boston. They dig up a road, fix something, pave it all up nice and pretty... and six months later they got the same piece of road all dug up again. They say something else broke or they forgot something. Guaranteed there's some kinda scam going on with these guys, there always is here.

Anyhow, back to the state trooper pensions. These guys cram as much OT as they can in before they retire. And they can retire at 52 years old! 52! Can you believe it?

So we have state troopers retiring at age 52 with $180,000-a-year lifetime pensions!

And then they get government jobs and continue working. They got a word for that in the papers here, double-dipping, but no one ever does anything about it. So they're getting $180 grand pensions, maybe an $80 grand salary from another government job, and they get another pension! The things I seen here, you wouldn't believe.

Everything is so corrupt. Something's gotta give. 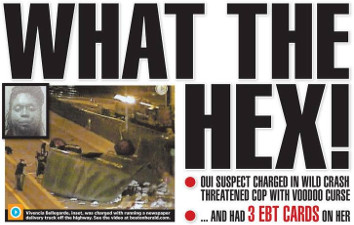 Right over there [points to overpass]... not too long ago, some lady was drunk driving, drove right off that overpass, stops up traffic for a whole day. Well, they search her purse since she's driving drunk.

She's got, I don't know, four-five EBT cards? You know, the welfare cards.

Well, it turns out the state admits there's 24,000 EBT cards with people they can't locate. 24,000! It's costing taxpayers millions in dollars for these welfare scams that people are abusing.

They have stories in the paper about people bringing plastic containers into grocery stores, using 10 or 11 EBT cards, filling up as many containers as they can, shipping the containers of food to their home countries. Maybe Dominican Republic, where they can't get these kinds of cereal or what-not.

Well, the people in the foreign countries sell the stuff and split the money with the person who shipped it here.

All paid for with EBT fraud, WIC fraud, you name it.

I don't see things changing for a while. 9 out of 10 people ain't payin' attention.

Take Mitt Romney, he was a heckuva governor. Every good idea he had to get government working better, the Democrats blocked. Every single one, and he still had a great record. For four years, he never even drew a salary. Not a single dollar.

If a Democrat had served as governor and never taken a salary, the media woulda been blaring that day in and day out.

But with Romney, he's a Mormon. He's this or that. Greedy. Whatever. Mormon or not, I got news for you about the guy in the White House. 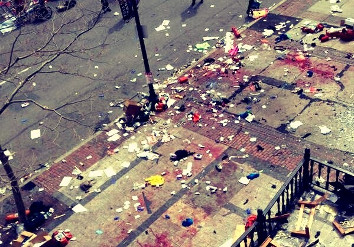 I don't believe there's anything like a moderate Moslem. I was here for the Boston Marathon bombing, was right nearby.

There was blood everywhere. Everywhere. Blood on the street with arms and legs blowed off.

I'm a cab driver, believe me, I know Moslems. Most cab drivers around here are Moslems. We gotta wait to use the bathroom so they can wash their feet. They bend backwards to make sure the Moslems got everything they need and the rest of us get treated like dirt.

Tell you what, during the Iraq War, if an American chopper got shot down, I'd see these guys high-fiving. They'd be laughing it up, celebrating if Americans got killed. They work here but they hate America, they really do.

Look at that car what got booted.

They torture the working people in this city, they really do.

8am I'm driving around, the working people are all up and going to work.

9am, 9:30am - the freeloaders are sitting on their stoops, drinking and smoking cigarettes, yucking it up, living off the working people.

If you have a car in this city, oh boy, do they torture you. They'll ticket you for no reason, even if you have a parking pass.

They got a meter maid on every corner, it's even worse now with the police contract coming up for negotiation. The last mayor [Menino] left that timebomb waiting. They didn't ever get a contract with the police done over the last three years or so. There's a mayor election in a few weeks and whoever wins has one hell of a problem with that police contract. 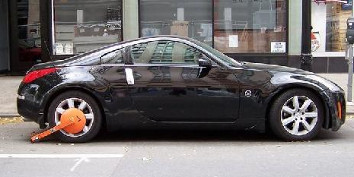 Any way, now that the contract is around the corner, they have meter maids everywhere. Everywhere. You park anywhere, it seems like, even legally, and "bam" you got a ticket. The worst thing is, someone else with a car will take the ticket off your windshield, put in on their windshield to protect themselves from getting a ticket!

So now you don't know you got a ticket! Guess what: that happens three times and "bam", you got a boot on your car. Now you're really screwed.

You know what getting a boot off costs? $600 bucks. There's a boot installation fee and a boot removal fee.

And if you got a piece o' crap car: don't even think about abandoning your vehicle. After it's there a while, you get his with a $500 "Abandonment Fee".

There's no way to win around here.

The whole city's corrupt, it's infested with corruption, it's everywhere.

But right now, this city's headed into the crapper. They say it's a bustling busy city. Well, I've been here for 60 years, and the fraud and corruption keeps getting worse. And at some point, it's gotta end, because there just ain't enough money to keep paying for all of these scams they're running.


Thanks to Cabbie X for the conversation.

It's interesting that Cabbie X complains about a city that takes him coming and going - the same city that had the Feds seize the assets of a cab company, accusing it's owner of underpaying his drivers:
http://www.bostonglobe.com/metro/2013/06/20/judge-freezes-assets-city-taxi-king/R2DZokAcfngOHmFvhPVLpL/story.html

Seems the city wins no matter what.

That's true of all government, all the time. They win, you lose.

Are you sure this cabbie was in Boston and not San Francisco?

Absolutely fantastic rant by an awake American. Cabbie X echoes the disquieting observations and disgust for corruption that many of us witness and feel every day.

Thanks for sharing, Doug. Made my night.

It sounded exactly like a scene you'd read in Atlas Shrugged.