PROPAGANDA: Obamacare did not repeal the First Amendment

Perhaps the most odious application of Obamacare is one that’s gotten very little attention—until now. It’s the requirement that says all businesses are to notify their employees by Oct. 1 of the existence of Obamacare insurance exchanges. 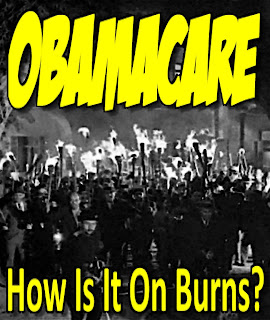 Moreover, the Obama administration is now using this less-discussed but critical employer mandate to compel business owners to extol the virtues of socialized medicine and wealth redistribution. The word “notify” has been rewritten to mean “promote.” Even employers opposed to Obamacare are being told to peddle the new entitlements they find detestable.

I’ve previously complained that the Hawley Troxell law firm in Boise, which represents Idaho’s Obamacare insurance exchange, wrote this summer that “employers are prohibited from pressuring employees to not seek coverage through an exchange.” Well, employers aren’t prohibited, the law firm later acknowledged; they’re just encouraged not to.

The federal Department of Labor has created its own “model” forms intended to help employers with the mandated notification.

The federal government’s doe-eyed forms say that the exchange — henceforth referred to as a “marketplace” — “is designed to help you find insurance that meets your needs and fits your budget. The Marketplace offers ‘one-stop shopping’ to find and compare private health insurance options.”

This is government-sanctioned propaganda, on a scale that might impress Joseph Goebbels.

The forms also encourage Americans to sign up so they can see if they’re eligible for “a new kind of tax credit that lowers your monthly premium right away.”

It’s for this reason, my team at the Idaho Freedom Foundation created ExchangeForm.com. This site helps employers generate their own form to meet the federal government’s notification mandate without the Obamacare worship designed to swell public dependency on government through wealth redistribution.

The website lets businesses truly educate their employees, and not just with the sycophantic radiance projected by Obama’s Labor Department. Employers can warn their employees of the hazards, too, with prewritten notations such as, “It is important to understand that your use of the above subsidies may come at a heavy price to both you and the country,” and “Understand that our country is trillions of dollars in debt. If you accept tax credits to pay for your health insurance, that bill will have to be paid by this nation’s children and grandchildren. “

Warped as it may be in 21st century America, the federal government is trying to co-opt employers into believing that they must now sell Obamacare to their employees through compulsory notification of the availability of federal entitlements and glowing promises of economic prosperity through federal handouts.

Next, expect employers to have to notify their employees of other programs — food stamps, Medicaid, Medicare, ObamaPhones and so on — and perhaps facilitate their sign up.

Near as I can tell, Obamacare did not repeal the First Amendment. Employers still have a right to not be a shill for Big Government. ExchangeForm.com gives employers just one more little weapon in a war for the heart and soul of a nation.

Wayne Hoffman is president of the Idaho Freedom Foundation.

An employer need only introduce the propaganda with "The Department of Health and Human Services requires us to provide you the following notice".

The employer could follow that notice with its own position.

But, employers may already be properly afraid of retribution by government agencies. In that case, it is bettter for each employer to go along to get along. That is how totalitarian governments become established.

An organized government cannot be stopped by disorganized businesses.

Obamacare is the most powerful law ever passed in this nation. It is also the most odius. It rivals the Nazi Enabling Act that Hitler used to consolidate absolute power.

It's unprecedented 2,700 pages were crafted by leftist fascists, who understood perfectly well what they were writing. Cheap Justice(you read that right) John Roberts also understood the consequences of his cowardice in changing his Supreme Court vote.

If this law is not repealed, our nation, as we know it, is literally doomed.