OUCH: Well THIS is Inconvenient Timing for the Sacramento Bee's Pro-Obamacare Op-Ed

While I'm sure you've never heard of it, the Sacramento Bee is purportedly a newspaper and website serving as the unofficial public relations arm of the California Democrat Party.

In a hysterically ill-timed op-ed, today's Bee featured a whiny, half-witted attack on the GOP for honoring the will of the people.

Well, if it's a pipe dream, geniuses, then why waste your breath whining about it?

They simply are unwilling to acknowledge that the Patient Protection and Affordable Care Act, which they call Obamacare, is the law of the land.

The law of the land? Wait: is that the same law of the land that Barack Obama continually rewrites, issuing waivers, exemptions and exceptions to his favored constituencies and donors?

Well, if Obama can change it, why can't the Republicans? Don't you believe in equal rights?

Rep. Thomas Massie, R-Ky., showed how parochial and ideological the tea party faction has become. Massie told The Washington Post: “All that really matters is what my district wants. And my district is overwhelmingly in favor of my position.” ... clearly, making insurance affordable for Americans across the nation is not a priority.

In a stunning coincidence, California Health Line Magazine reports that problems with the state's Obamacare exchanges will crush the poor, especially African-American and Hispanic families. 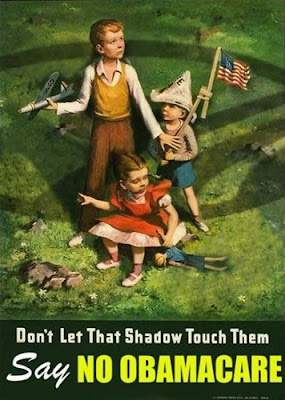 • Longer wait times for care;
• Fewer specialists; and
• The loss of a long-time doctor.

For example, ... policyholders who purchase a Health Net exchange plan will have access to less than one-third of the insurer's network of providers for employer-based plans. In addition, Blue Shield of California's exchange plans will include only 50% of the insurer's usual provider network.

Some exchange plans also will exclude certain large hospitals... Health care provider groups are concerned that the limited networks will make it more difficult for patients to access care, especially in Latino and African American communities that historically have been underserved...

...Donald Crane -- CEO of the California Association of Physician Groups -- said the organization is "nervous about these narrow networks," adding, "It was all about price. But at what cost in terms of quality and access?"

The California Medical Association said that the state has underestimated the problems facing policyholders and that the group doubts the state's claim that 80% of California physicians will be included in exchange plans.

The only rational explanation I can come up with is that the Sacramento Bee wants crappy health care for minorities.

The entire Obamacare exchange system is fatally flawed. It's a masterpiece of central planning, which is to say it is a Soviet-style disaster. The faster it gets destroyed, the better.

I don't know anybody unwilling to accept the fact that Boehnercare is "the law of the land." It was rammed through on Christmas Eve at the last moment the Democrats had enough votes to pass *anything* before the Republicans gained the 41st vote against when the new session convened. And then Barry signed it. Putting aside the unprecedented gamesmanship (deem-and-pass, reconciliation) needed to get it through, it got through and is indeed law.

If it wasn't law, there would be no need to fight it.

But what the hell is up with "law of the land?" Does phrasing it like this convey some additional weight to it? Was it handed down from heaven on stone tablets?