I'd love to give credit to the creator of this excellent infographic, which I spotted in a comment at Weasel Zippers. The article -- "Obama Back To Pushing Class Warfare: Republicans Stopping My Efforts To Redistribute Wealth" -- quotes The Hill newspaper.

The president has powers to fight income inequality, President Obama argued in an interview broadcast Sunday, adding that Republicans in Congress have hobbled his efforts to do it... acknowledg[ing] that the wealthiest Americans have benefited disproportionately from the economic recovery of recent years. But he was quick to add that much of that trend is due to globalization, technology and, not least, the GOP’s opposition to his economic agenda – all factors he suggested are beyond his control. 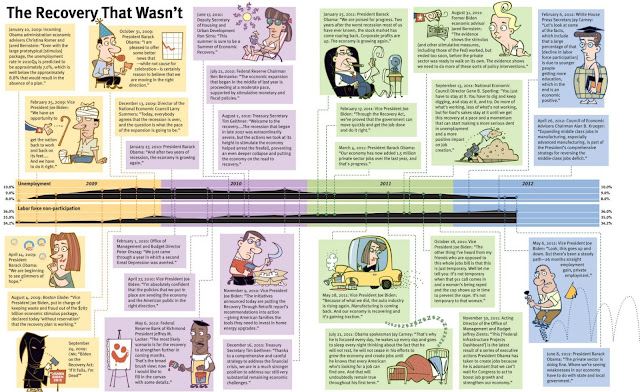 These Democrats are economic illiterates. If they would simply get out of the way of the private sector, we'd see a real recovery of the sort that President Ronald Reagan touched off. He slashed taxes, cut regulatory requirements, and spurred innovation by unleashing the private sector. The differences between the Reagan recovery and the Obama malaise are stunning.

As for factors "beyond his control", such as a recalcitrant Congress?

President Reagan -- unlike Obama -- did it with an obstreperous, obstinate, free-spending Democrat Congress by appealing to the fundamentally good and hard-working nature of the American people. He went over the heads of Congress.

This is something Obama is unable to do; his legacy of fables, fabrications and fictions haunt him. Most Americans have simply tuned Obama out.

As we close out Obama's fourth annual "Recovery Summer" -- in which we saw virtually no recovery, rampant unemployment, record food-stamp use, record Social Security Disability fraud, record Medicare fraud, record Medicaid fraud -- I can only ask: aren't the American people getting sick of Obama's tiresome rhetoric? His endless clamoring to steal money from his enemies to give to his friends?

When will the American people have had enough of his failures?