Sen. Ron Wyden (D-OR): NSA is likely tracking the location of all Americans using their cellphones

...Wyden suggests that the NSA is either tracking or has been studying tracking millions of Americans. Presumably Wyden isn't allowed to explicitly say what the NSA is doing, so his suggestions should probably be given more weight than suggestions by others... 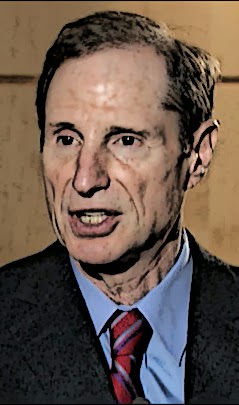 ...[he] suggested on Thursday that the National Security Agency tracked or considered tracking the cellphone location data of millions of people in the United States.

"What I don't want to do, senator, is to put out in an unclassified forum on anything that's classified here," [NSA Director Gen. Keith] Alexander said...

"General, if you're responding to my question by not answering it because you think that's a classified matter, that is certainly your right," Wyden said. "We will continue to explore that because I believe this is something the American people have a right to know."

...In a hearing in March, Wyden asked James Clapper, the director of national intelligence, whether the NSA collects any data on millions of Americans. Clapper insisted that the NSA does not — or at least does "not wittingly" — collect data in bulk.
After leaks by Edward Snowden revealed the agency collects data on all U.S. phone calls, Clapper apologized for the misleading comment.

At Thursday's hearing, Wyden accused the leaders of the intelligence agencies of building a system "that repeatedly deceived the American people."

"Time and time again, the American people were told one thing about domestic surveillance in public forums while government agencies did something else in private," Wyden said.

In related news, the feckless Dianne Feinstein (D-CA) inadvertently revealed that the "NSA can collect email and other communications directly from the backbone (rather than from the internet companies themselves)."

In other words, the NSA is -- like the rest of the bureaucracy -- completely out of control. It is operating without lawful authority to collect information on U.S. citizens who have been accused of no wrongdoing whatsoever.

This is how countries descend into tyranny, step-by-step, like a frog in water that is slowly brought to a boil.

But they mean well.

The boiling frog is a false metaphor (snopes). The behaviors of Goobermint employees more closely resemble those of stalkers, rapists, pedophiles, or serial killers. There comes a point where only the very lucky escape with their virtue intact. Fortunately the Framers gave everybody a way out if they would take it.

Well, Wikipedia might disagree, saying that if the heating is sufficient gradual, it works. The truth is the metaphor works in this case.

The American people have gradually accepted more and more government intervention, up to Obamacare, which might possibly be where the frog jumps out. You get the IT geeks mad about snooping, you've engaged the Left, just like Ron Wyden, whose work on this I admire.

So maybe someone here can answer a question for me. I'm using an ancient Motorola flip phone. mr. creeper has one even older than mine. At what point did tracking of cell phones become possible or was it always available?

Cell tower triangulation would allow carriers (and the government) to track location within a meter or so.

It's unclear whether smart-phones equipped with GPS are sharing that data with carriers while not informing subscribers.