WHY DID SHE FEAR FOR HER LIFE? Does Donna Brazile Know Who Killed Seth Rich?

The real bombshell lurking in Donna Brazile’s stunning interview with ABC’s George Stephanopoulos about her new book Hacks may be her cryptic references to murdered DNC IT staffer Seth Rich and her statement that she took the precautions one takes when one fears for his or her life.

So far, speculation about the unsolved murder of Seth Rich has been dismissed as right-wing conspiracy theories but Brazile’s references to him in the light of all that has come out about Wikileaks, the Fusion GPS dossier, and Hillary’s purchase of the DNC that rigged the primaries against Bernie Sanders, may be a key to a missing piece of this whole puzzle.

Brazile, according to Newsweek, in a piece titled “DNC’S Donna Brazile Dedicated Her Book To ‘Patriot’ Seth Rich, Whose Death Made Her Fear For Own Life”,  dedicated her book in part to Rich: 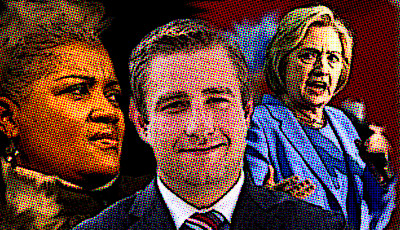 A new book by Donna Brazile, the former interim chairwoman of the Democratic National Committee (DNC), has been making headlines for its controversial claims about the 2016 presidential election and the Hillary Clinton campaign. But the provocative points start even before the first chapter, as Brazile reportedly dedicated the book in part to Seth Rich, the DNC staffer whose murder launched a conspiracy theory.

Axios reported on Sunday that the book’s dedication reads, “In loving memory of my father, Lionel Brazile Sr.; my beloved sister, Sheila Brazioutlanle; my fearless uncles Nat, Floyd, and Douglas; Harlem’s finest, my aunt Lucille; my friend and mentor, David Kaufmann; my DNC colleague and patriot, Seth Rich; and my beloved Pomeranian, Chip Joshua Marvin Brazile (Booty Wipes). I miss y’all.” …Rich appears elsewhere in Brazile’s book, as the Post reported earlier in the weekend. She wrote that Rich’s murder haunted her and that she'd installed surveillance cameras at her home and would keep the blinds in her office window closed so she could not be seen by snipers, according to the Post. Brazile talked about Rich on ABC News’s This Week with George Stephanopoulos on Sunday. She told the host about her critics: “They don’t know what it was like to be over the DNC during this hacking. They don’t know what it’s like to bury a child. I did: Seth Rich.”

(While Newsweek missed a comma in the dedication -- Brazile is actually calling David Kaufmann a patriot, not Seth Rich -- that doesn's change the meaning any.)

Why did Donna Brazile fear for her life after Seth’s Rich unsolved murder? Were these cryptic references a way of warning those who she feared might do her harm that more would be revealed after her possible demise? Only Donna Brazile can elaborate, and it is doubtful she will at this point.

Seth’s murder remains a mystery with no apparent motive, not even a robbery gone wrong. As the Daily Caller Investigative Group observes in a piece titled “Donna Brazile Has A Theory About Who Killed Seth Rich”:

From her book Hacks:

I felt some responsibility for Seth Rich’s death. I didn’t bring him into the DNC, but I helped keep him there working on voting rights. With all I knew now about the Russians’ hacking, I could not help but wonder if they had played some part in his unsolved murder. Besides that, racial tensions were high that summer and I worried that he was murdered for being white on the wrong side of town. [My friend] Elaine expressed her doubts about that, and I heard her. The FBI said that they did not see any Russian fingerprints there.

Brazile repeatedly returns to the subject of being haunted by Rich’s murder, even though other Democrats have pounced on anyone who suggested that the murder was anything other than a robbery gone wrong. The DNC data staffer was killed days before Wikileaks began publishing its emails, and his valuables were not taken.

The Russians did not provide Wikileaks with any purloined emails or other documents, according to Wikileaks founder Julian Assange. As Fox News reported on Assange’s interview with Sean Hannity:

"Our source is not the Russian government," Assange told "The Sean Hannity Show."

"So in other words, let me be clear," Hannity asked, "Russia did not give you the Podesta documents or anything from the DNC?"

Seth Rich, being a DNC IT staffer, if he did not provide the documents and emails to Wikileaks himself, might have been in a position to know who did and how. We do know the DNC denied the FBI access to the server that was allegedly hacked by the Russians:

The Democratic National Committee "rebuffed" a request from the FBI to examine its computer services after it was allegedly hacked by Russia during the 2016 election, a senior law enforcement official told CNN Thursday.

"The FBI repeatedly stressed to DNC officials the necessity of obtaining direct access to servers and data, only to be rebuffed until well after the initial compromise had been mitigated," a senior law enforcement official told CNN.

Perhaps Donna Brazile knows more about what the DNC was trying to hide from the FBI. Her shocking revelations in her book may be the tip of a rather large and unnerving iceberg. Perhaps Donna Brazile has an idea of who killed Seth Rich and why and that’s why she fears for her life.

I have no sympathy for her.
She knew too much and remained silent for far too long.
Now she wants to avoid dancing with the one who brought her.

Her book is a masterpiece of CYA.

She's as big a tramp as Hillary. I don't believe a word that P.O.S. says. I don't know why she keeps talking about Seth Rich, unless she is somehow involved, and not in a good way. And as to her complaints about the DNC, she never would have risen as high as she has in that cesspool, if she weren't totally rotten.

No sympathy for her, either.