“I immediately pushed him away with both of my hands against his chest and told him if he ever did that to me again I wouldn’t be so nice about it the next time.

“I walked away. All I could think about was getting to a bathroom as fast as possible to rinse the taste of him out of my mouth.

“I felt disgusted and violated.”

Why was the KABC press conference about Franken’s misconduct bizarre?

Only a few years earlier, the same KABC radio executive who arranged the Tweeden press conference fired me for calling out the blatant left-wing hypocrisy over allegations not just of groping but of rape. I dared insist that the allegations made against President Bill Clinton by Juanita Broaddrick – who claims that she was raped by Bill Clinton and that then, two weeks after the rape, Hillary Clinton verbally intimidated the alleged rape survivor – should have been taken seriously. “No one cares about this issue,” said the very same KABC exec now allegedly incensed over the groping allegation against Franken. As for Broaddrick, the executive screamed, she is “old news,” as were, he insisted, Bill and Hillary’s treatment of multiple accusers. He burst into my radio studio, with the show in progress, and literally yelled at me for pounding an “irrelevant” topic. Shortly before I got fired, the executive sent this letter to my agent: 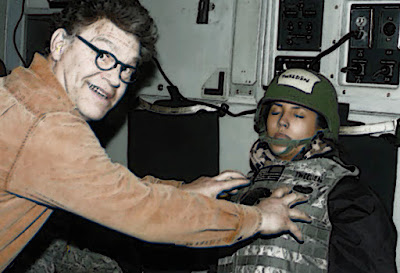 “I point out that from 3:15 p.m. to almost 4 o’clock, Larry is AGAIN talking about Kathleen Willey, Juanita Broderrick (sic), Monica Lewinsky, Paula Jones and somehow linking Hillary Clinton and James Carville to Bill Clinton being a rapist and sexual harasser. This line of discussion is repeated and repeated, day after day. It is neither timely or relevant to today – though I assume Larry thinks it is in some way. It is my opinion that the sheer volume of instances – sometimes multiple times a day – where he brings this old, arcane topic up is very detrimental to the ratings. While there are literally scores of current, important and compelling stories, Larry is talking, again, about an issue from over 20 years ago. For the better part of an hour. Please let me know if you have some idea of how to get it to cease, short of embargoing mentions of the names above. … It was my understanding that Larry was going to stop by and see me. He has not.”

It isn’t enough to criticize Bill and Hillary Clinton – so-called advocates for women – for their hypocrisy. What about ABC News’ “chief anchor,” George Stephanopoulos, who helped set up the “war room” to respond to allegations made by women against Clinton? Stephanopoulos, then a top aide to presidential candidate Bill Clinton, even said, “Bill Clinton has no character problem.” How does a partisan like Stephanopoulos, who consistently defended Clinton’s behavior and blamed the “Republican attack machine,” become the “chief news anchor” of anything, let alone of ABC News? If, at last, much of the country is reassessing their opinion of Bill and Hillary Clinton, what about enablers like Stephanopoulos?

What about media executives, like the one I once worked for, who downplayed the hypocrisy and, in his case, actively attempted to squash any discussion of it? What about these media enablers? Comedian Chelsea Handler recently tweeted: “Imagine being molested by an older man. Then that man denies ever doing it and then goes on and gets elected to United States Senate. What kind of message does that send to young girls everywhere? And men to all the men who abuse women?”

Juanita Broaddrick tweeted back: “I can imagine. I was raped by the Arkansas AG who then becomes Governor & President and NBC held my interview explaining the rape until after his impeachment hearing. But I’m sure you don’t want to go there.” Handler apologized: “You are right and I apologize to you for not knowing your story. Democrats along with Republicans and the rest of the world’s political parties all need to do better and respect the firsthand accounts of victims. I believe you.”

Why did Handler not know her story? Blame media decision-makers who ignored or downplayed this issue – and even threatened the careers of those who dared call out the hypocrisy.