SHE ONLY DOES IT ON DAYS THAT END IN "Y": Hillary Lies Again, This Time About Fusion GPS Dossier

Rain is wet. Rock is dry. Hillary lies. A lot.

As Hillary Clinton continues her Spite-Across-America tour, she finally answered a question about her campaign's anti-Trump dossier. The one that was slipped to the FBI and helped generate the Obama wiretapping and unmasking of Trump officials, and the Mueller investigation.

And of course it was a leading softball question on The Daily Show.

"This was research started by a Republican donor," she insisted. "The people doing this came to my campaign lawyer and asked would you like us to continue it."

Except that's a lie. 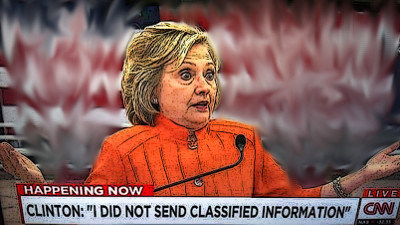 But by mid-June 2016, despite all the revelations Simpson was digging up about the billionaire’s roller-coaster career, two previously unimaginable events suddenly affected both the urgency and the focus of his research. First, Trump had apparently locked up the nomination, and his client, more pragmatic than combative, was done throwing good money after bad. And second, there was a new cycle of disturbing news stories wafting around Trump as the wordy headline splashed across the front page of The Washington Post on June 17 heralded, INSIDE TRUMP’S FINANCIAL TIES TO RUSSIA AND HIS UNUSUAL FLATTERY OF VLADIMIR PUTIN.

Simpson, as fellow journalists remembered, smelled fresh red meat. And anyway, after all he had discovered, he’d grown deeply concerned by the prospect of a Trump presidency. So he found Democratic donors whose checks would keep his oppo research going strong. And he made a call to London, to a partner at Orbis he had worked with in the past, an ex-spy who knew where all the bodies were buried in Russia, and who, as the wags liked to joke, had even buried some of them.

Since the revelation that Hillary's campaign had funded the dossier, their allies have tried to fiddle with the timeline. But it's quite clear that Steele and the Russian dossier were a product of the Dem shift.

The constant attempts to shift the blame for the dossier and its highly dubious contents and the use they were put to by Obama Inc. is an effort to launder and whitewash the responsibility.